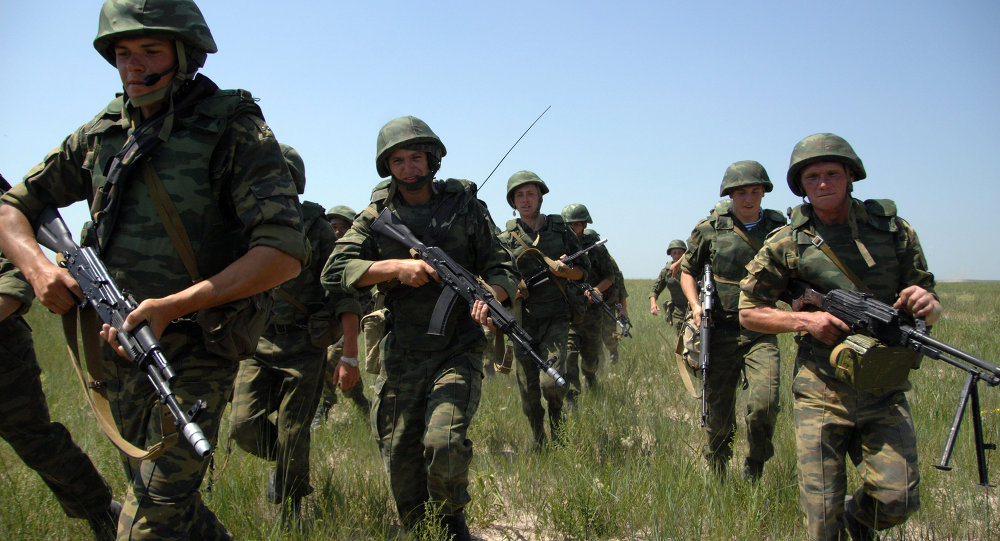 As part of the meeting with Bektanov during an official visit to the Belarusian capital, Khrenin invited Kazakhstan to participate in the upcoming joint Russian-Belarusian "Zapad-2021" strategic military exercises scheduled to take place September 10-16.

High-ranking military officials from Kazakhstan and Belarus have discussed the prospects of developing military cooperation during a meeting in the Belarusian capital on Tuesday.

"During the meeting, Lieutenant-General Viktor Khrenin noted the unanimity of views regarding the challenges and threats in the East European and Central Asian regions of collective security and spoke highly of the level of military cooperation between Kazakhstan and Belarus," the Belarusian Defense Ministry wrote on its Telegram Channel following a meeting between a ministry official and Murat Bektanov, Kazakhstan's First Deputy Minister of Defense and Chief of the General Staff of the Armed Forces.

As part of the meeting with Bektanov during an official visit to the Belarusian capital, Khrenin invited Kazakhstan to participate in the upcoming joint Russian-Belarusian "Zapad-2021" strategic military exercises scheduled to take place September 10-16. The importance of enhancing bilateral relations on matters of mutual interest was highlighted during the meeting.

"Special attention was paid to increasing the number and improving the quality of joint combat training events, expanding the range of training specialties available for Kazakh specialists at Belarusian military academies and the need for exchanging experience in the patriotic upbringing of youth," the ministry said.

Zapad-2021 drills, staged every four years, will bring together thousands of troops from Russia and Belarus to polish their mobility, readiness, and interoperability.

The exercise is a regular part of military training for the strongest military power in the Caspian region, which rotates among Russia’s four main strategic commands: Vostok (East), Zapad (West), Tsentr (Centre) and Kavkas (Caucasus). The exercise has expanded internationally over the years, with Belarus joining in 2017 and China and Mongolia in 2018.

Maneuvers are expanded into the more multilateral framework by including forces from the regional members of the Shanghai Cooperation Organization (SCO) and the Collective Security Treaty Organization (CSTO). Troops from Kazakhstan, Kyrgyzstan and Tajikistan are participating in the drills on the basis of their dual membership in the CSTO and SCO, while Uzbekistan’s involvement relates to its membership in the SCO.

"We have invited all the SCO member states to take part in it," Izvestiya quoted Shoigu as saying at a meeting of the defense chiefs from the member states of the SCO. "This exercise is solely of defensive nature and is not aimed against any country or alliance."

However, the war games are a concern for Western countries. This year's exercise will center the spotlight mainly due to Russia’s recent mobilization of an estimated 100,000 troops along Ukraine’s border that seriously heightened tensions between Western countries and Moscow.

For decades, NATO and Russia have been at odds over the Ukrainian crisis in 2014 that was followed by Russia's takeover of Crimea — a Ukrainian territory about the size of Maryland that extends into the Black Sea. Russia’s actions in Eastern Europe have put NATO on edge, as Western experts believe that Russia’s military activities at the borders of the Baltic States and Ukraine, as well as its increasing military influence in Belarus pose security challenges impacting the region.