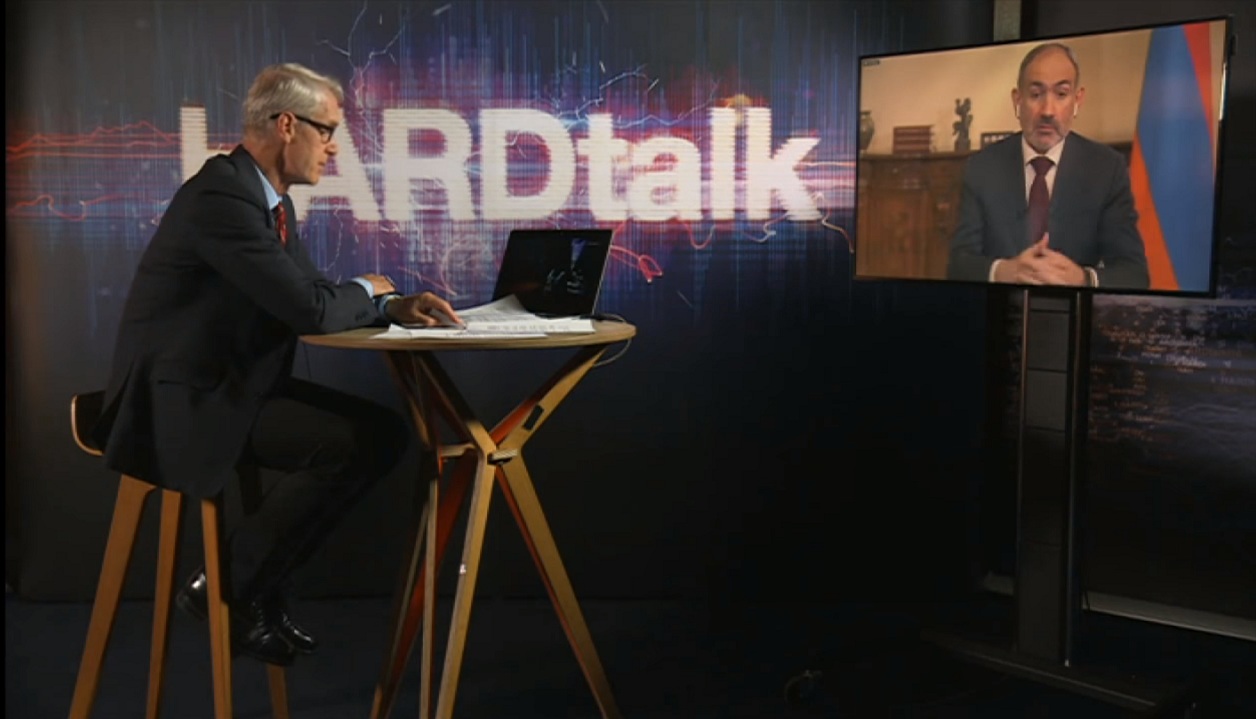 The Armenia-Azerbaijan Nagorno-Karabakh conflict was discussed on a recent episode of BBC's HARDtalk. In the online interview, Armenia's Prime Minister Nikol Pashinyan dodged specific questions on the conflict by giving irrelevant answers and making unfounded accusations against Azerbaijan.

HARDtalk anchor Stephen Sackur recalled that one of the priorities among the Armenian premier's election promises was finding a path to peace with Azerbaijan. However, he pointed out that the incumbent government has failed to achieve this, engaging instead in bloody border clashes with its neighbor in July. Sackur said that Armenia did not seem to be interested in peace given the killing of an Azerbaijani civilian by the Armenian military during July's border clashes.

An attack by the Armenian army on Azerbaijani positions in the district of Tovuz along the border with Armenia sparked a bloody war from July 12-16. Twelve Azerbaijani servicemen, including one general, and a civilian were killed in the fighting.

Pashinyan blamed Azerbaijan for the breach of ceasefire in mid-July, accusing it of using force and bellicose rhetoric. His accusation, however, overlooks his own hardline statement made in the city of Khankendi in the occupied Nagorno-Karabakh region of Azerbaijan last year. Sackur recalled Pashinyan's visit to the occupied Azerbaijani city, in which the Armenian premier delivered a provocative speech where he invoked the nationalist "miatsum" (unification) chant. This notorious separatist slogan gained popularity in the late 1980s and early 1990s with the rise of Armenia's illegal claim to internationally-recognized lands of Azerbaijan. On August 5, 2019, Pashinyan called for the unification of Azerbaijan's Nagorno-Karabakh region with Armenia by saying: "Artsakh [the name Armenia uses for Karabakh] is Armenia. Period."

Sackur brought up Pashinyan's visit as an example of Armenia's provocative actions and policies against Azerbaijan which have fueled tensions in the Nagorno-Karabakh region. Sackur also cut the Armenian prime minister off when he tried to present self-styled historical facts claiming Nagorno-Karabakh to be a "millennia-old" Armenian land. Instead, the presenter asked Pashinyan to stop going through old history and focus on the realities of today.

"The UN General Assembly has adopted a resolution which quite clearly demands immediate, complete and unconditional withdrawal of all Armenian forces from the occupied territories of the Republic of Azerbaijan," Sackur said, referring to four resolutions passed by the UN in 1993 at the height of Karabakh war. "You choose to go there and talk about that territory being yours. You clearly are not a peacemaker."

Pashinyan tried to paint Armenian troops in occupied Azerbaijani land as so-called "self-defense forces" of Nagorno-Karabakh. However, legally binding UN documents describe these forces as an "occupying force", the withdrawal of which would speed up the resolution of the conflict.

Sackur then asked Pashinyan a close-ended question providing a factual description of the Armenian army's atrocities during the war in Nagorno-Karabakh. Sackur asked whether he was ready to break a taboo of his predecessors, take responsibility for the abuses and crimes committed by Armenia's troops in Karabakh and say sorry. Pashinyan attempted to evade the question and justify the Armenian military's inhumane activities in the occupied Nagorno-Karabakh region.

The Khojaly Genocide of Azerbaijanis is known as one of the bloodiest massacres of the 20th century. Armenia's troops killed 613 ethnic Azerbaijanis, including 106 women and 63 children, in the town of Khojaly on February 26, 1992, during the town's occupation. Sixteen countries from around the world including the Czech Republic, Romania, Slovenia, Bosnia and Herzegovina, Mexico, Colombia, Peru, Panama, Pakistan, Jordan and Indonesia and the Scottish parliament in the UK, along with 24 state governments in the United States, have officially recognized the events in Khojaly as genocide.

Armenia occupied 20 percent of Azerbaijan's internationally-recognized territory, including the Nagorno-Karabakh region and seven adjacent districts, killed a total of 30,000 ethnic Azerbaijanis and displaced one million as a result of the Karabakh war in 1991-1994.