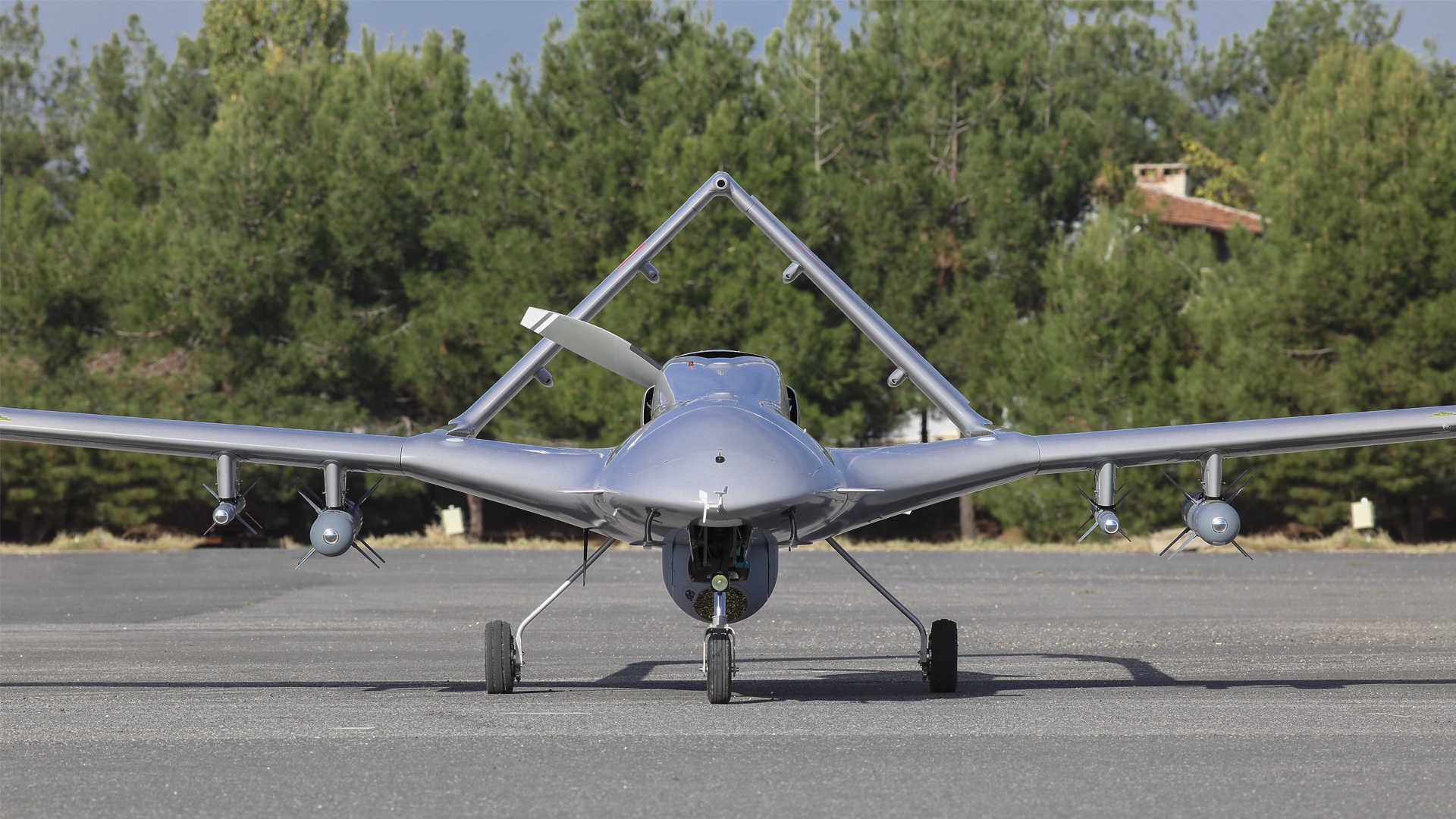 The Bayraktar TB2 attack drones purchased from Turkey have been effective in destroying both moving targets like tanks and armored personnel vehicles, and steady targets such as air-defense units. / Courtesy

The ministry explained in a statement issued on Wednesday that the information spread by the Armenian side claiming the destruction of two Azerbaijani UAVs within Armenia’s airspace is false.

“We inform that Azerbaijani UAVs do not perform flights over the territory of Armenia,” reads the statement.

Armenian Defense Ministry’s press secretary Shushan Stepanyan posted on her Facebook page that the two remotely piloted aircraft belonging to the Azerbaijani armed forces tried to penetrate the airspace of Armenia on November 4. Armenian media quoted Stepanyan, reporting that the country’s air defense units have downed the drones in the Shatjrek village of the southern Gegharkunik province and in the Mets-Masrik and Sotk areas of the same province.

Meanwhile, the Armenian authorities did not demonstrate any image of the downed UAVs which raised questions about truthfulness of the news.

Ongoing hostilities between the forces of Armenia and Azerbaijan in the occupied Karabakh region of Azerbaijan are the longest and fiercest since the ceasefire signed in 1994. The hostilities broke out on September 27 after Armenia’s troops deployed in the occupied Azerbaijani lands started shelling military positions and civilian settlements of Azerbaijan. Azerbaijani forces took immediate counter-attack measures to repel Armenia's offensive. Fighting have further escalated as both sides have intensively deployed artillery, mechanized forces, and infantry along the frontline. Azerbaijani army has liberated over 200 settlements from occupation during the ongoing counter-attack operations in the country’s Karabakh region.

UAVs are widely used in ongoing battlefields across Azerbaijan’s Karabakh region by both Armenia and Azerbaijan with the latter narrowing down the enemy’s military force with more intensive deployment of loitering munitions. Video footages released regularly by the Defense Ministry of Azerbaijan demonstrate the destruction of tanks, armored personnel vehicles, air defense units, ammunition depots, and military personnel of Armenia deployed in the occupied Nagorno-Karabakh region by drone strikes.

Azerbaijan has built up its force of UAVs with domestically produced devices and the materiel purchased from Israel and Turkey. Israel, a major drone exporter, was one of the key suppliers of remotely piloted aircraft to the Azerbaijani armed forces. Israel’s supplies to Azerbaijan included loitering munitions like Harop, Skystriker, and Orbiter 1K.

Harop proved its effectiveness during the previous clashes in April 2016. Harop is widely known as a kamikaze or suicide UAV due to its configuration as an entire warhead. The Skystriker and Orbiter 1K are more developed versions of kamikaze drones using electric engines that enables them to be virtually silent (unlike Harop) until they start their attack dive.

Meanwhile, the Bayraktar TB2 attack drones purchased from Turkey have been effective in destroying both moving targets like tanks and armored personnel vehicles, and steady targets such as air-defense units.

Azerbaijan has also launched the domestic production of UAVs. The Zarba 1K kamikaze drone designed using the similar configuration to Israeli Orbiter 1K has also an important effect in the aerial operations. The Defense Industry Ministry of the country has recently released the brand-new Iti Govan attack drones to help the army further reinforce the battlefield superiority in the Karabakh region.

In October, Azerbaijan armed forces destroyed around 20 aerial reconnaissance and attack drones of the Armenian army over the main conflict zone in the Karabakh region and the Armenia-Azerbaijan state border in Tovuz, Nakhchivan, as well as over the cities of Ganja and Mingachevir located far from the battlefield.

The Armenia-Azerbaijan Nagorno-Karabakh conflict is one of the world’s and region’s oldest conflicts. It has been jeopardizing the regional security since the hostilities broke out in the early 1990s after Armenia launched a full-fledged military campaign against Azerbaijan. The rising anti-Azerbaijan sentiments in Armenia grew into an armed intervention in Azerbaijan’s internationally recognized territories following the dissolution of the USSR in 1991.

The bloody war in 1991-1994 resulted in Armenia occupying Azerbaijan’s Nagorno-Karabakh region and seven surrounding districts, including Lachin, Kalbajar, Aghdam, Fuzuli, Jabrayil, Gubadli, and Zangilan. Over 30,000 ethnic Azerbaijanis were killed and one million were expelled from those lands in a brutal ethnic cleansing policy conducted by Armenia.