Baku Accuses Yerevan Of Consolidating The Occupation Of Nagorno-Karabakh 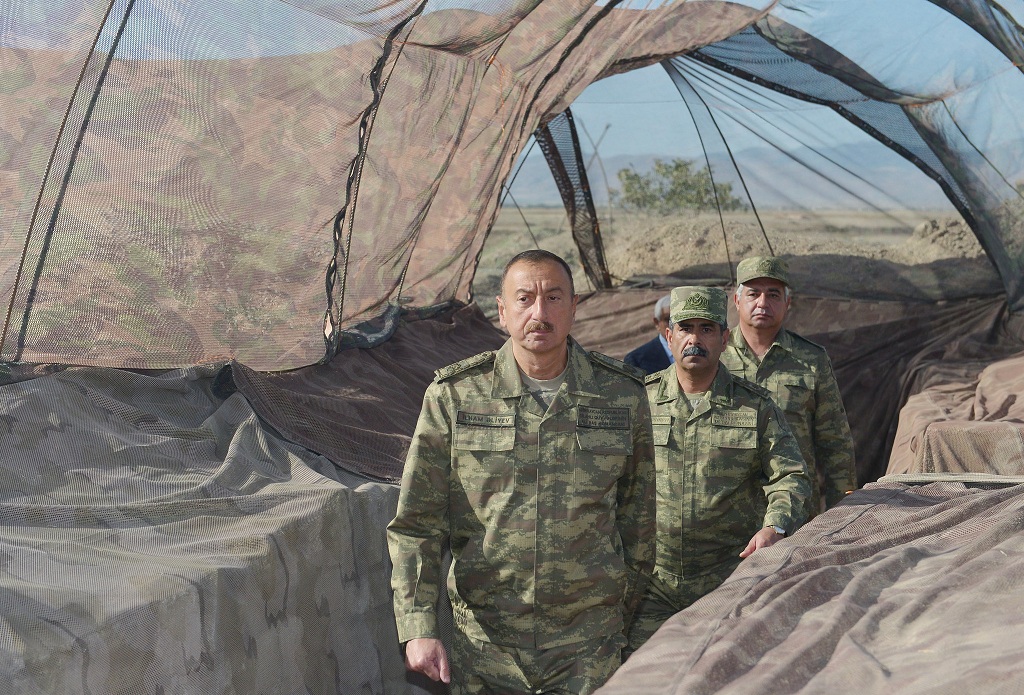 Azerbaijan President Ilham Aliyev in one of the armed forces unit in the frontline Aghdam district, August 6, 2014 / Azertag

One of the South Caucasus’ longest-running conflicts came into the spotlight last week at the 24th Ministerial Council of the Organization for Security and Cooperation in Europe (OSCE), held in Vienna on December 6. There, Azerbaijan’s Foreign Minister Elmar Mammadyarov met with his Armenian counterpart and took up the issue that has been threatening the regional peace and stability for over 25 years.

“Yerevan continues its unlawful practice of altering the demographic, cultural and physical character in the occupied territories of Azerbaijan [and] demonstrates its systematic policy aimed at consolidating the occupation and imposing a fait accompli [accomplished fact],” Mammadyarov said. Mammadyarov was referring to Armenia’s practices in Azerbaijan's Nagorno-Karabakh region and seven surrounding districts it continues to occupy.

“Such steps by Armenia, including armed provocations along the line of contact, as well as the recent illegal military exercises held by Armenia in the occupied territories undermine the peace efforts,” Mammadyarov added.

On December 2, the Armenian army held drills in the occupied Nagorno-Karabakh region, which were observed in-person by Armenia’s president Serzh Sargsyan and the top military officials.

During the ministerial meeting Mammadyarov accused Armenia of not being interested in taking necessary political steps to move beyond the “unsustainable and unacceptable status-quo [in Nagorno-Karabakh region].”

Armenia and Azerbaijan have been at odds since 1992, when Armenia launched military campaign to capture Azerbaijan’s Nagorno-Karabakh region, following the collapse of the Soviet Union in December 1991. The war ended in 1994 in a ceasefire after the UN Security Council passed four resolutions demanding the full withdrawal of Armenian troops from Azerbaijan. All four resolutions remain unfulfilled to this day.

The war resulted in the occupation of more than 20 percent of Azerbaijan’s historical and internationally recognized territory, more than 20,000 Azerbaijanis killed, and one million more internally displaced.

“Relevant UN Security Council resolutions, principles of the Helsinki Final Act, and decisions and documents of OSCE form the basis for conflict resolution and for the mandate of the [Minsk Group] Co-Chairmen,” Mammadyarov said at the OSCE ministerial meeting, referring to the agreement signed by 35 countries in 1975 that addressed various outstanding issues during the Cold War, as well as the OSCE task force charged with finding a peaceful solution to the conflict.

“If Armenia is genuinely interested in seeking a political solution to the conflict, then it must engage constructively in the conflict settlement process. The months ahead will demonstrate if Armenia is a serious partner for peace,” Mammadyarov said, “or we will continue down the road of further instability and conflict.”

Azerbaijan’s ultimate goal is to restore the country’s territorial integrity through reclaiming occupied areas peacefully. However, Baku has remained vigilant in the face of regular ceasefire violations by Armenia, which sometimes morph into a fierce gunplay between Armenian forces stationed in the occupied Nagorno-Karabakh region and Azerbaijani troops deployed along the line of contact.

In April of last year, the two sides fought from April 1 through the 4th, after Armenia shelled Azerbaijani positions and what was the bloodiest battle since ceasefire in 1994. The four-day clashes, dubbed Four Day War, or “April War,” ended in Azerbaijan regaining control over about 2,000 hectares (nearly 5,000 acres) of the lands that are recognized internationally as an integral part of Azerbaijan’s sovereign territory.