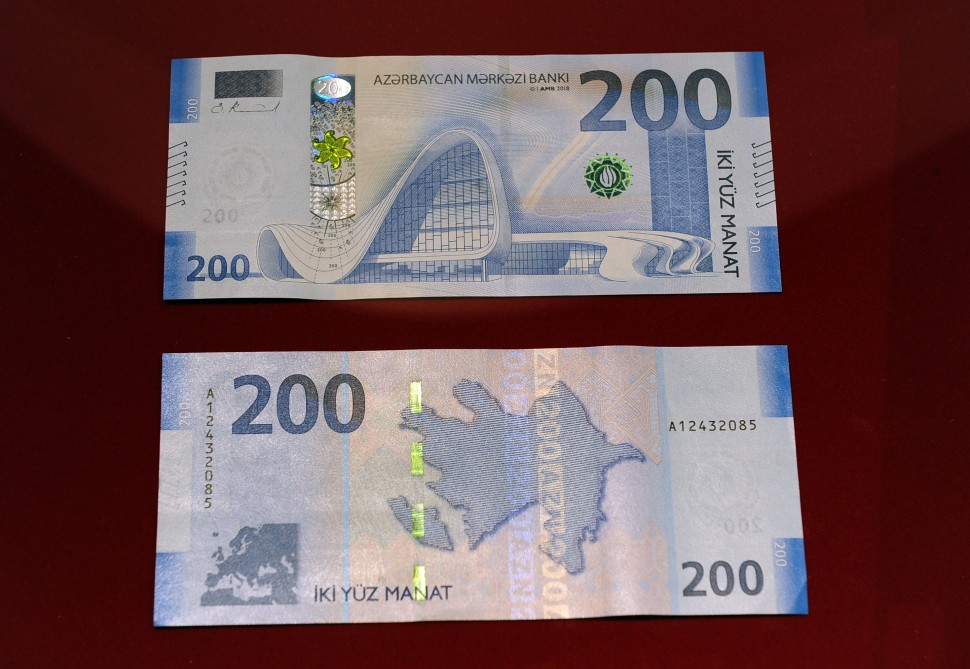 The AZN 200 note will be the largest to go into circulation since the national currency was rebranded and redesigned in 2006. / Azertag

The Central Bank of Azerbaijan announced on Wednesday that it will produce banknotes in denominations of 200 Azerbaijani manats, the national currency, which are to be put into circulation sometime in June. The new banknote will be the largest bill offered within the Caspian country’s financial market. It is equal to approximately USD $118.

“Taking into account the dynamic development of the country's economy, changes in the structure of cash in circulation over the last decade, as well as with the purpose of increasing the efficiency in the cash sphere, it was decided to issue a new 200 manat banknote,” Elman Rustamov, Chairman of the Central Bank, told media in a presentation of new banknote and coins in Baku on May 23.

"The new banknote depicts a magnificent view of the Heydar Aliyev Center, one of the most modern symbols of our capital city, the main exterior and interior design elements of the Center, as well as the elements of national carpet examples and other national ornaments,” Rustamov said.

The decision to introduce 200 manat banknotes follows preliminary statements made by the Deputy Chairman of the Central Bank Alim Guliyev in September, when he revealed that the growth of money in Azerbaijan was “quite possible.”

The manat is Azerbaijan’s national currency and is currently issued in six denominations: 1, 5, 10, 20, 50 and 100 manat. The Azerbaijani manat, which is abbreviated with the letters “AZN” and uses the symbol ₼, is subdivided into 100 qəpik (“gapick”), similar to how one U.S. dollar is divided into 100 cents. The Central Bank of Azerbaijan mints coins in denominations of 1, 3, 5, 10, 20 and 50 qəpik.

The AZN 200 note will be the largest to go into circulation since the national currency was rebranded and redesigned in 2006. The American company Crane Currency, a worldwide banknote supplier headquartered in Boston, designed the new Azerbaijani note. The Munich-based Giesecke & Devrient Company, which provides banknote and securities printing, smart cards, and cash handling systems worldwide, is responsible for printing the new bill.

The new banknote is protected against falsification attempts, thanks to advanced security technologies that have been implemented into the paper bill. Rolling Star LEAD hologram and Rolling Star security thread safeguards the banknote against counterfeiting. The ultra-modern SPARK Live optical security hologram and fluorescent elements that pop up on the bill’s front and back faces, visible under an ultraviolet light, foster the money’s protection from any kind of forgery.

A member of the economic policy, industry and business committee of Azerbaijan’s parliament, Vahid Ahmadov, said the latest decision of the Central Bank to increase the denominations offered is not a hint at inflation or devaluation.

“The Central Bank controls the money supplies at the necessary level. The price of the oil is high, there is a positive export-import balance,” Ahmadov said at new currency’s presentation ceremony on May 23.

“That’s why it would be wrong to talk about manat’s devaluation. Issuance of the 200 manat banknote is not a reason for any impact on monetary assets in the country. The Central Bank’s chairman Elman Rustamov said Azerbaijan has enough cash reserves and there is no reason to worry.”

The Central Bank has also unveiled commemorative gold coins that are being minted to honor the 95th birthday of former Azerbaijani President Heydar Aliyev, and the 100th anniversary of the creation of the Azerbaijan Democratic Republic, which was established in 1918. The commemorative coins are being struck at the Royal Mint courtyard of the British royal family.

The Azerbaijani manat made its first appearance during the 23-month-long existence of the Azerbaijan Democratic Republic, which had been freed from imperial Russian rule on May 28, 1918 and lasted until the Soviet occupation on April 28, 1920.

Introduced in 1919, what is termed the “first manat” was annulled under Soviet rule, when Moscow introduced the Soviet ruble, which was used throughout the lifespan of the Azerbaijan Soviet Socialist Republic. In 1992, after Azerbaijan regained sovereignty from a collapsed USSR, the national currency came back to life, when 10 rubles were equal to one manat.

Deemed the “second manat,” this currency lasted until 2006. A year earlier President Ilham Aliyev authorized the creation of the “third manat” at a value of 5,000 old manat.