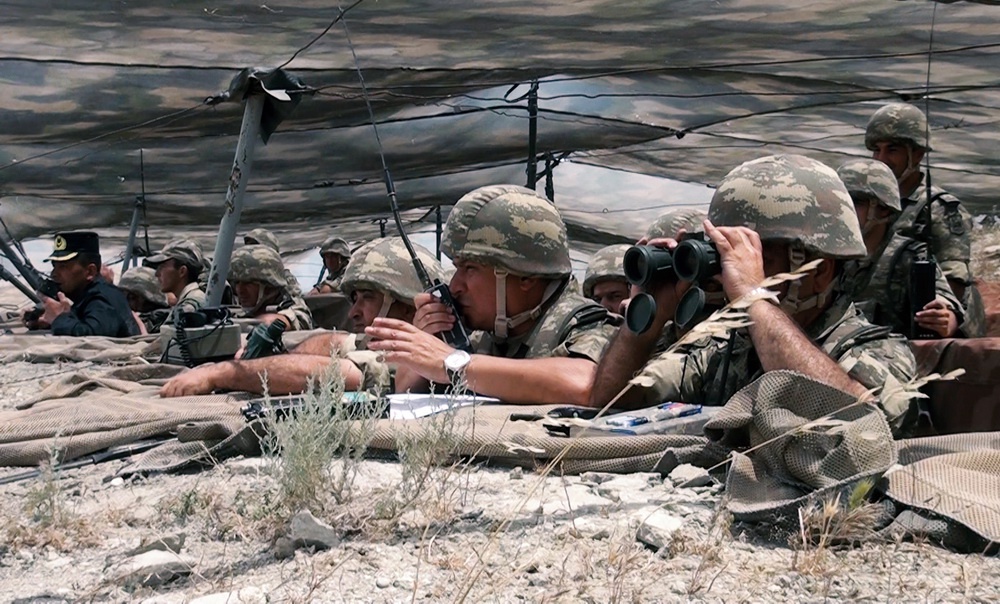 Officers of the Armed Forces of Azerbaijan observe a military drill in the main proving ground of the army, June 19, 2019 / Ministry of Defense of Azerbaijan

Today marks just over one century since a national military for Azerbaijan was formed.

“Our country has achieved tremendous success in the field of army building,” Azerbaijan’s President Ilham Aliyev said in a speech made last year to mark the 100th anniversary of the liberation of the country’s capital city of Baku from Bolshevik forces in 1918.

“According to international ratings, the Azerbaijani army today is among 50 strongest armies on a global scale. Our military potential is growing. We need a strong army because our lands are under occupation,” President Aliyev said in September 2018, according to his official website.

The national army of Azerbaijan was founded in 1918 when the Azerbaijan Democratic Republic (ADR) was founded in the wake of the fall of the Russian empire. The newborn republic needed an army that would safeguard both the internal order and borders of the country against external threats.

On June 26, 1918, the ADR – considered the first democratic republic in the Muslim world – announced the creation of the national armed forces. Around 25,000 soldiers were recruited, and the government allocated 24 percent of the state budget for military purposes. By August 1, the Military Ministry was created.

Today, the armed forces of the Republic of Azerbaijan are comprised of the Land Forces, Air and Air Defense Forces, and the Navy. The National Guard, the State Border Service, the Internal Troops, and Special State Protection Service of Azerbaijan are considered associated forces.

Azerbaijan also manufactures some of its own arms, including the Istiglal and Mubariz-12.7 anti-materiel rifles, YIRTIJI-7.62 and Yalguzag sniper rifles, and vehicles such as the Tufan mine resistant ambush protected (MRAP) vehicle. More than 20 military plants produce 1,200 types of military products and equip the national army. At the same time, Azerbaijan also started exporting military products.

Global Firepower, which tracks data on national militaries, ranks the Armed Forces of Azerbaijan as the strongest in the South Caucasus region – an area south of Russia and north of Iran that also includes the countries of Georgia and Armenia.

In its 2019 report, Global Firepower identified Azerbaijan as the world’s 52nd strongest military among 137 countries worldwide. By comparison, Georgia and Armenia ranked 85 and 96, respectively. The defense budget of Azerbaijan allocated for this year is estimated at around $2 billion, representing an increase from $1.6 billion in 2018.

Azerbaijan’s army has fought wars with its western neighbor, namely Armenia, over the Nagorno-Karabakh region that is internationally recognized as part of the sovereign territory of Azerbaijan. Once the Soviet Union collapsed in 1991, Armenia kicked off a military campaign against Azerbaijan. Twenty percent of Azerbaijan’s internationally recognized territory, namely the Nagorno-Karabakh region and seven surrounding districts, were occupied by Armenia during a full-scale war that lasted until a ceasefire deal in 1994 and remains under occupation to this day.

The long-lasting conflict threatens to escalate into a full-fledged war, as it morphed into a bloody war over four days from April 1 to 5 in 2016, following Armenian shelling of Azerbaijani villages. Armed clashes, which were later recognized as the April War, or Four Day War, resulted in Azerbaijan's liberation of about 2,000 hectares (approximately 5,000 acres) of its land, including a village, and two strategic hills.

In June 2018, the Armed Forces of Azerbaijan regained control of roughly 11,000 hectares (27,000 acres) of land that Armenia had been occupying in Nakhchivan, an Azerbaijani exclave located between Turkey, Armenia and Iran.