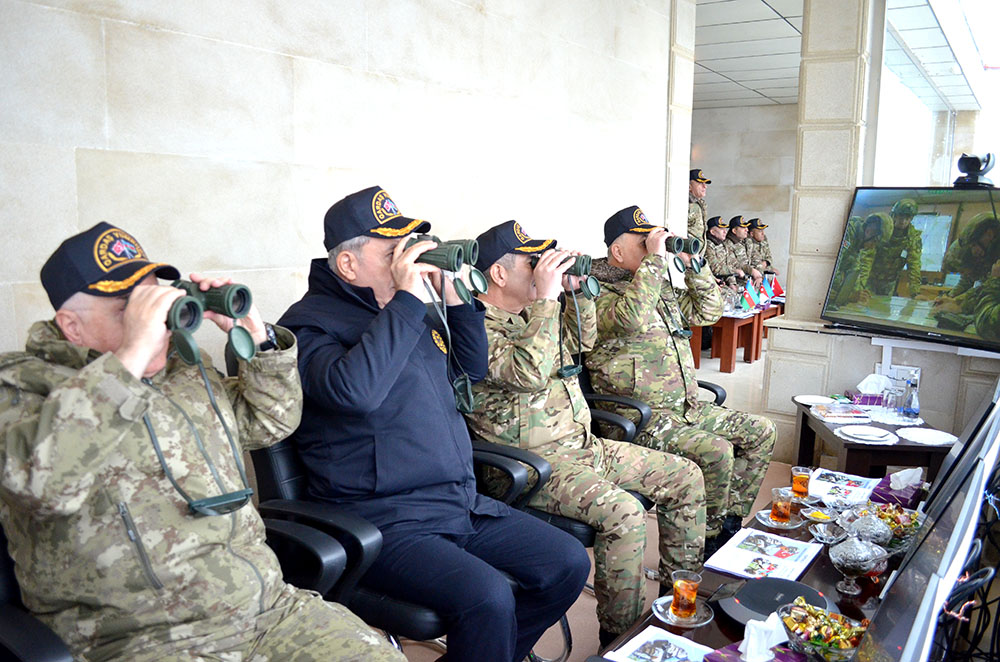 The Armed Forces of Türkiye and Azerbaijan have teamed up for joint military drills along the latter’s southern border with Iran.

The exercises, codenamed “Fraternal Fist”, kicked off on Monday in the capital Baku, Astara, Jabrayil, and Imishli regions. The units of the Land Forces, Air Force, Special Forces, Engineering Troops, Rocket and Artillery Troops of the Azerbaijani Army and the servicemen of the Turkish Armed Forces participated in the military drills, while the Turkish Air Force's F16 fighter jets were also reportedly deployed.

During the drills, the troops performed various exercises and combat tasks in line with modern combat methods, such as deploying artillery, organizing interoperability, building pontoon bridges and landing paratroopers into the depths of an imaginary enemy.

The ultimate goal of the two-day exercises was to ensure combat coordination during the interoperability of troops, improve control, share experience and increase the professionalism of military personnel.

Turkish National Defense Minister, Army General Hulusi Akar arrived in Azerbaijan for the occasion. He met with President Ilham Aliyev and his counterpart Colonel-General Zakir Hasanov on Monday. On Tuesday, both ministers watched the joint exercises.

On Tuesday, President Ilham Aliyev and his Turkish counterpart Recep Tayyip Erdogan via a telephone call congratulated the participating troops for successfully completing the exercises.

Azerbaijani President and Supreme Commander-in-Chief of the Armed Forces Ilham Aliyev emphasized that the “Fraternal Fist” exercises are another manifestation of the Turkish-Azerbaijani unity and stressed that this unity is indestructible and eternal.

Meanwhile, earlier in October, the Armed Forces of Iran conducted massive drills along the Araz River on the border with Azerbaijan. The Iranian Foreign Ministry said those drills were part of periodic exercises to strengthen the Islamic country’s borders and not directed against neighboring countries, including Azerbaijan.

However, the introduction of the drills on the Iranian media sent an open warning to Azerbaijan. In a video demonstration of the war games on the Iranian TV channels, Israel was strictly warned and Azerbaijan was called to “know and understand” that this is Iran, the “land of lions”.

Following Azerbaijan’s liberation of its lands from decades-long Armenian occupation in 2020, Iranian authorities took immediate measures to fortify its northern borders. Tehran’s government has even blamed Azerbaijan for “bringing Israel” into the region, while Foreign Minister Hossein Amir-Abdollahian has reportedly said that “Zionist groups used some regions of Azerbaijan to approach the border with Iran”.

The claims by Tehran were adamantly denied by the Azerbaijani authorities. During his visit to the liberated Jabrayil region in October 2021, President Ilham Aliyev said the baseless accusations of Iran against Azerbaijan were unacceptable and Baku would not leave them unanswered.

"Regrettably, some government officials started making unfounded accusations against us – Azerbaijan has allegedly brought Israel to these regions. Let them open their eyes wide and take a look. Where did they see Israel here? Not a single person lives here. There is no building here. Is there evidence? No," President Aliyev said, adding if there is no evidence, everyone should be held accountable for what they say.

In October 2021, Iran conducted large-scale drills on the border with Azerbaijan. President Aliyev said that each country has a right to hold exercises, but noted that he was surprised by Tehran's move to host military drills after Azerbaijan liberated its territories on the border with Iran from Armenian occupation.

“During the occupation, Iranian military forces never conducted military exercises in the area bordering the occupied territories of Azerbaijan. They could do it. 132 kilometers of the Azerbaijani border were occupied, and this is the border between Azerbaijan and Iran. Why didn't they conduct military training on that border?" he said.

Armenia and Azerbaijan were in an armed conflict for nearly 30 years over the Karabakh region, which is an internationally recognized territory of Azerbaijan. Armenia launched full-blown military aggression against Azerbaijan following the Soviet Union’s dissolution in 1991. The bloody war lasted until a ceasefire in 1994 and saw Armenia occupying 20 percent of Azerbaijan’s internationally recognized territories. Over 30,000 Azerbaijanis were killed, and one million were expelled from those lands in a brutal ethnic cleansing policy conducted by Armenia. Although the United Nations Security Council adopted four resolutions in 1993 demanding the immediate withdrawal of the occupying forces from Azerbaijani lands and the return of internally displaced Azerbaijanis to their ancestral lands, Armenia failed to comply with all four legally binding documents.

On September 27, 2020, the decades-old conflict took a violent turn after Armenia’s forces deployed in the occupied Azerbaijani lands shelled military positions and civilian settlements of Azerbaijan. During the counter-attack operations that lasted 44 days, Azerbaijani forces liberated about 300 settlements, including the cities of Jabrayil, Fuzuli, Zangilan, Gubadli, and Shusha, from nearly 30-year-long illegal Armenian occupation. The war ended in a tripartite statement signed on November 10 by Armenia, Azerbaijan, and Russia. Under the statement, Armenia also returned the occupied Aghdam, Kalbajar, and Lachin districts to Azerbaijan.