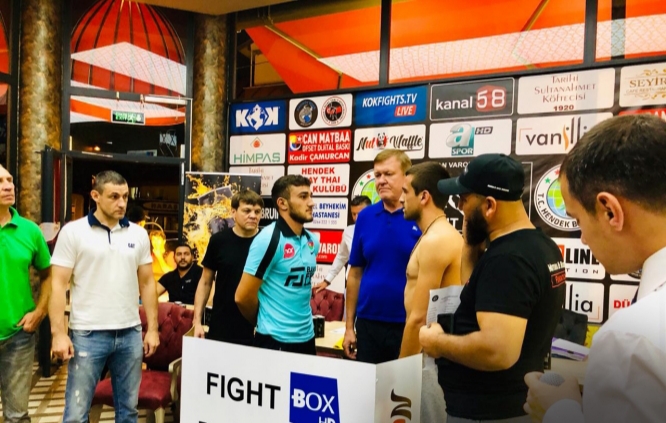 Azerbaijan’s Nijat Hasanov, who mounted the professional boxing ring for the first time, defeated Zaza Amiridze from Georgia and ended his debut game with a victory, while Rauf Aghayev claimed victory over Mitiko Shubitidze, also from Georgia. / Azertag

Azerbaijan’s Nijat Hasanov, who mounted the professional boxing ring for the first time, defeated Zaza Amiridze from Georgia and ended his debut game with a victory, while Rauf Aghayev claimed victory over Mitiko Shubitidze, also from Georgia. Both athletes represent a professional sports club based in Azerbaijan’s capital city known as Baku Fight Lab.

Baku Fight Lab's athletes, both men and women, have participated and won medals in national and international tournaments. The athletes are trained by club professionals who are world and European champions. The club is also registered by the Professional Boxing Federation of Azerbaijan, which resumed its activities earlier this year.

Part of federation’s plan for the near-term is to bring in international expertise and seek cooperation with professional boxing's official record keepers. The president of the federation announced that they would cooperate with professional boxing organizations such as WBA, WBC, IBF, as well as the national federations of foreign countries and official boxing record and ranking keepers FIGHTFAX and BOXREC.

In addition, the Professional Boxing Commission was established under the federation to ensure that professional coaches, doctors, and other people pass qualifying exams, and that fights organized by marketing and promotion companies are in line with relevant rules.