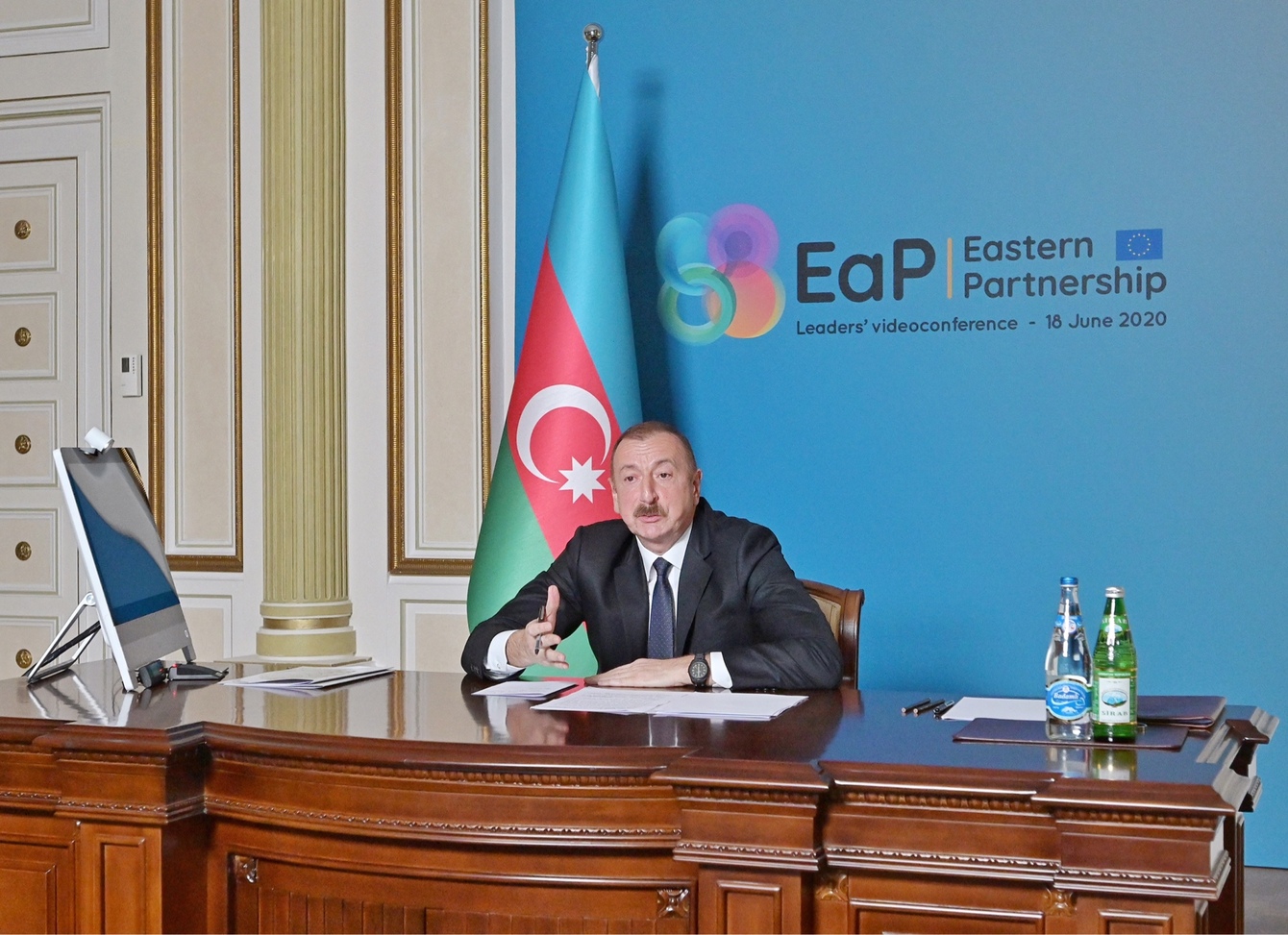 A short, but heated exchange of views between Armenia's prime minister and Azerbaijani president took place during the video summit of the Eastern Partnership country leaders last week. Armenian Premier Nikol Pashinyan's efforts to distort facts and blame Azerbaijan for what he baselessly claimed to be "racism" were met with a severe backlash from President Ilham Aliyev of Azerbaijan.

President Aliyev said the "Partnership Priorities" document between Azerbaijan and the European Union that was initialed in Brussels two years ago emphasizes the commitment of both sides to the principles of independence, sovereignty, territorial integrity and inviolability of internationally recognized borders. The same principles should act as a base for resolving the conflict between Armenia and Azerbaijan, according to the president.

"Armenia continues to occupy 20 percent of Azerbaijan's internationally recognized territory. Nagorno-Karabakh and 7 other regions of Azerbaijan have been under Armenian occupation for almost 30 years. As a result of Armenia's policy of ethnic cleansing, more than 1 million Azerbaijanis have become refugees and internally displaced persons," President Aliyev said in a speech on June 18, which mentioned the four UN Security Council resolutions calling for Armenian forces' withdrawal from Azerbaijani lands, as well as the relevant documents adopted by the OSCE, the Non-Aligned Movement, NATO, the European Parliament, and other international organizations, go unfulfilled to date.

President Aliyev blamed the Armenian prime minister for his efforts to destroy the essence and format of the talks explaining that on the contrary Pashinyan's remarks, Nagorno-Karabakh is not Armenia, this is Azerbaijan which is recognized by the entire international community.

The Armenian prime minister responded to Azerbaijani president's speech by criticizing Azerbaijan for what he imagines to be "racism against Armenians" and proposing his "ideal" format for negotiations. He recalled Azerbaijani servicemen who was instigated and involved in a fatal incident by his Armenian counterpart in Hungary in 2004. Pashinyan said this man has been welcomed and is treated as a hero after being extradited to Azerbaijan.

The last lines of Nikol Pashinyan's speech addressed the resolution of the conflict in the Nagorno-Karabakh region of Azerbaijan upon what is nothing less than a personally invented format of talks - trilateral negotiations involving Azerbaijan, Armenia and the so-called "people of Nagorno-Karabakh."

President Aliyev responded to Armenian premier's remarks by saying that he has already mentioned the occupation of Azerbaijani lands exactly by Armenia based on historical facts and the resolutions of international organizations.

"Secondly, I would not advise the Prime Minister of Armenia to talk about racism, because Armenian terrorists are world-famous. A person with the surname of Karapetyan, who committed a terrorist attack at Paris' Orly airport, was later extradited to Armenia and pardoned by the Armenian president," President Aliyev said. "That is why I would advise him to sit quietly when discussing such issues. I conclude my speech here."

The terrorist attack in the Orly airport of Paris was led by Varuzhan Karapetyan, a member of the notorious Armenian ASALA terrorist organization on July 15, 1983. Two of the eight people killed in the bloody terrorist attack at the Turkish Airlines ticket office, were citizens of Turkey, four of France, one of the United States, and one of Sweden. The fatal attack injured 55 people. Karapetyan pleaded guilty saying that he was planning to detonate the bomb inside the plane. Although a French court passed a life sentence for his crime, Karapetyan was extradited to Armenia in 2001 and was greeted as a hero by both the people and authorities, including then-President Robert Kocharyan, who pardoned him, and then Prime Minister Andranik Margaryan, who provided him with housing and employment.

The roots of Armenian terror go back to the 19th century when groups such as Armenikan, Hunchak, and Armenian Revolutionary Federation Dashnaktsutiun (ARFD) utilized terror as the primary way of fighting their perceived enemies. The first terrorist attack attributed to Armenian groups was committed by ARFD in the Ottoman Central Bank in 1896.

In 1918, Armenian terror hit ethnic Azerbaijanis. From March 30-31 to April 2-3, ARFD nationalist forces massacred over 50,000 Azerbaijanis and other ethnicities in 167 villages across numerous cities and districts of Azerbaijan.

The modern twist of the early Armenian terror organizations was ASALA. Created in Lebanon in 1975, ASALA organized and committed dozens of terrorist attacks around the world, including in Austria, France, Germany, Vatican, Turkey, Switzerland, Russia, Spain, Greece, the Netherlands, Denmark, the United States, and other countries. The last and most recent attack claimed by ASALA took place against the Turkish Embassy in Brussels, Belgium in 1997. Since the 1970s, thirty-one Turkish ambassadors fell to ASALA terror.

For Armenians, ASALA members were heroes fighting for the "ideals" of Armenia. Armenian poet Silva Kaputikyan dedicated her "It's raining my sonny" poem to the memory of Levon Ekmekjian, an ASALA member, who masterminded the attack on Esenboğa International Airport in Turkey's capital Ankara in 1983.