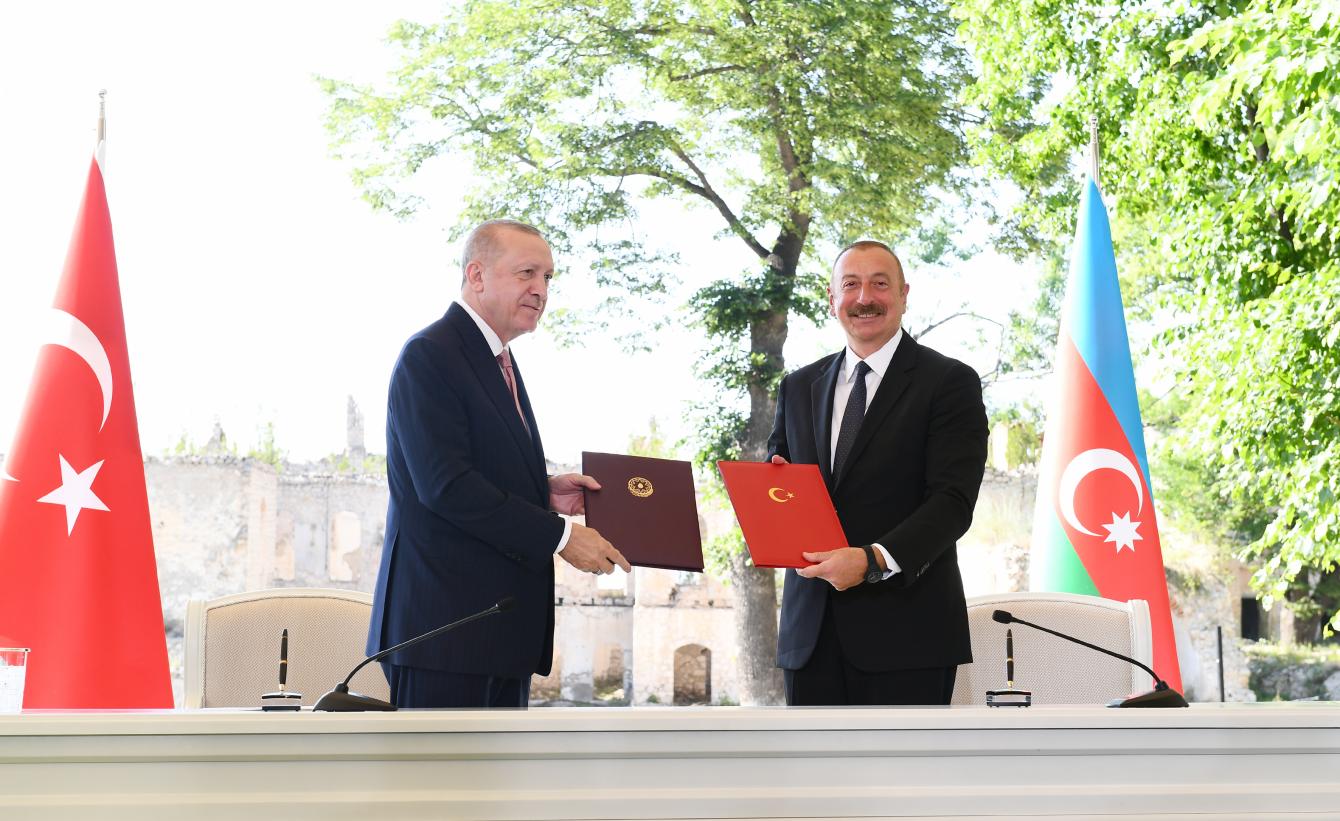 President Ilham Aliyev and his Turkish counterpart Recep Tayyip Erdogan signed the Shusha Declaration in the Shusha city of Azerbaijan on June 15, 2021 / President.Az

Azerbaijan's parliament earlier this week approved the Shusha Declaration signed between Turkey and Azerbaijan, which aims to facilitate cooperation between Ankara and Baku in the spheres of defense, economy, energy, trade, diaspora and media, and other areas of mutual interest.

The parliament sanctioned the strategic Shusha Declaration on allied relations between Turkey and Azerbaijan following the discussions of the bill in a plenary session on Tuesday.

In the meantime, the Turkish parliament has also received the Proposal of Approval of the Shusha Declaration simultaneously on the same day. Chairman of the parliament Mustafa Shentop has signed the document and passed it on to the foreign relations committee, which will convene on Wednesday to debate the proposal.

President Ilham Aliyev and his Turkish counterpart Recep Tayyip Erdogan signed the Shusha Declaration as part of the latter’s visit to Azerbaijan on June 15, 2021. The document was signed in the Shusha city of Azerbaijan, one of the cities liberated from decades-long Armenian occupation in the autumn of 2020.

Azerbaijani President Aliyev said the declaration refers to the historic Kars Agreement that was signed a century ago, which has a great symbolic meaning for the two countries.

"With the Shusha Declaration, we drew up a road map of our relations for the new era," President Erdogan said during the signing.

Azerbaijan received the key political and moral support from Turkey during its 44-day counter-attack operations against the Armenian occupying forces in the Karabakh region in 2020. The political-military elite of Ankara voiced firm support to Azerbaijan’s efforts aimed at restoring its territorial integrity suffering from nearly 30-year-long illegal Armenian occupation.

The cutting-edge equipment purchased from Turkey took a special role in Azerbaijan’s victory in the war. Turkish Bayraktar TB2 unmanned aerial vehicles (UAV) have reportedly given Azerbaijan an upper hand in the 44-day war with Armenia in the Karabakh (Garabagh) region, an internationally recognized territory of Azerbaijan.

The drone fleet of the Azerbaijani army, which includes Bayraktar TB2 and cutting-edge Israeli-made UAVs and loitering munitions, is said to have destroyed more than 200 pieces of armor and artillery systems of Armenia during the war, which took place between September 27 and November 9, 2020. Azerbaijani forces liberated more than 300 settlements, including five major cities from the Armenian occupation. Armenia also returned three more occupied districts to Azerbaijan under an agreement brokered by Russia.

The Shusha Declaration became the pinnacle of the development of the relationship between Turkey and Azerbaijan, described as “two states, one nation”. The document calls for joint efforts to modernize the armed forces of the two fraternal countries, implement measures aimed at strengthening defense capabilities and military security, increase the joint capacity of the two countries' armed forces and establish close cooperation in modern weapons and ammunition management. The Security Councils of the two countries are tasked with holding joint meetings on national security issues and discussing regional and international security developments concerning the national interests of Turkey and Azerbaijan.

Baku and Ankara also confirm in the declaration that the military-political cooperation developed between the two states and in line with their interests is not directed against third states and that the parties will expand their joint efforts and cooperation especially in the fight against terrorism, organized crime, drug trafficking and illegal immigration.

Turkey plans to open a consulate general in Shusha that will support the development of bilateral relations. The sides also plan to increase the joint trade turnover to $15 billion in 2023.