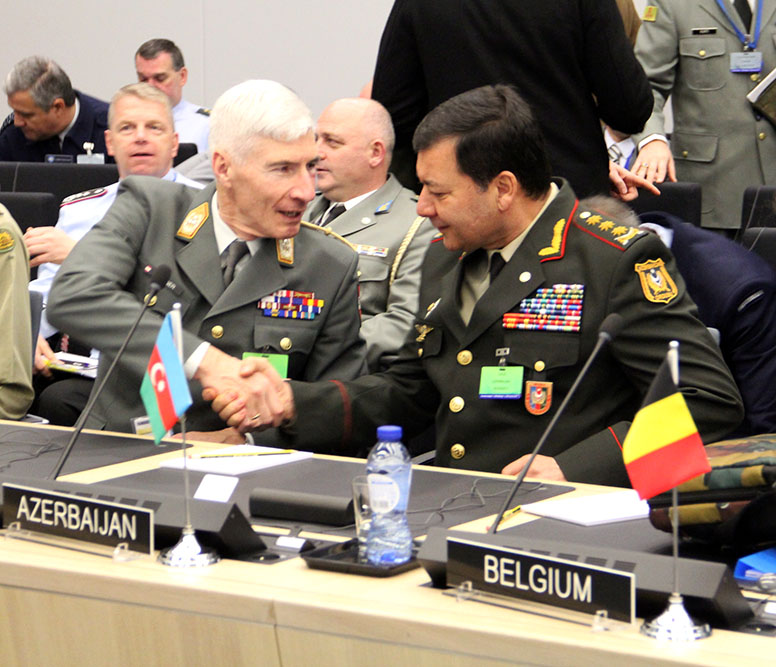 Azerbaijan’s relationship with NATO dates to 1994, when Azerbaijan joined its Partnership for Peace program, which provides a diplomatic framework for non-NATO member states looking to participate in NATO-led programs and activities.

Top military officials from Azerbaijan and NATO met in Brussels on the sidelines of the 180th Military Committee Conference on Tuesday, to discuss upcoming exercises for Afghanistan’s security forces taking place under the NATO-led Resolute Support mission. General Najmeddin Sadikov, Chief of the General Staff of the Armed Forces of Azerbaijan, and the First Deputy Minister of Defense took part in the discussions, according to the ministry’s website.

Azerbaijan has been playing a significant role in carrying NATO operations to restore peace and stability in Afghanistan. Beginning in 2002 it supported the International Security Assistance Force (ISAF) mission, NATO’s longest mission, which saw 130,000 soldiers from 51 NATO and non-NATO partner nations take part.

The first detachment of nearly a hundred servicemen from Azerbaijan teamed up with NATO soldiers for providing security to a television tower station, a central ammunition depot and conducting regular patrols in the capital city of Kabul.

Resolute Support was launched in 2015 and is responsible for the capacity building of Afghanistan’s defense forces and conducting advice and assist activities. The mission consists of roughly 16,000 personnel from 41 NATO member states and allies, including Azerbaijan, operating from a command center in Kabul and four satellite centers located in Mazar-e-Sharif in the north, Herat in the west, Kandahar in the south and Laghman in the east.

NATO’s Military Committee meets more than once a year at NATO’s headquarters in Brussels to discuss the alliance's operations and missions, and to provide the North Atlantic Council with consensus-based military advice on how NATO can best meet global security challenges.

Azerbaijan’s relationship with NATO dates to 1994, when Azerbaijan joined its Partnership for Peace program, which provides a diplomatic framework for non-NATO member states looking to participate in NATO-led programs and activities.