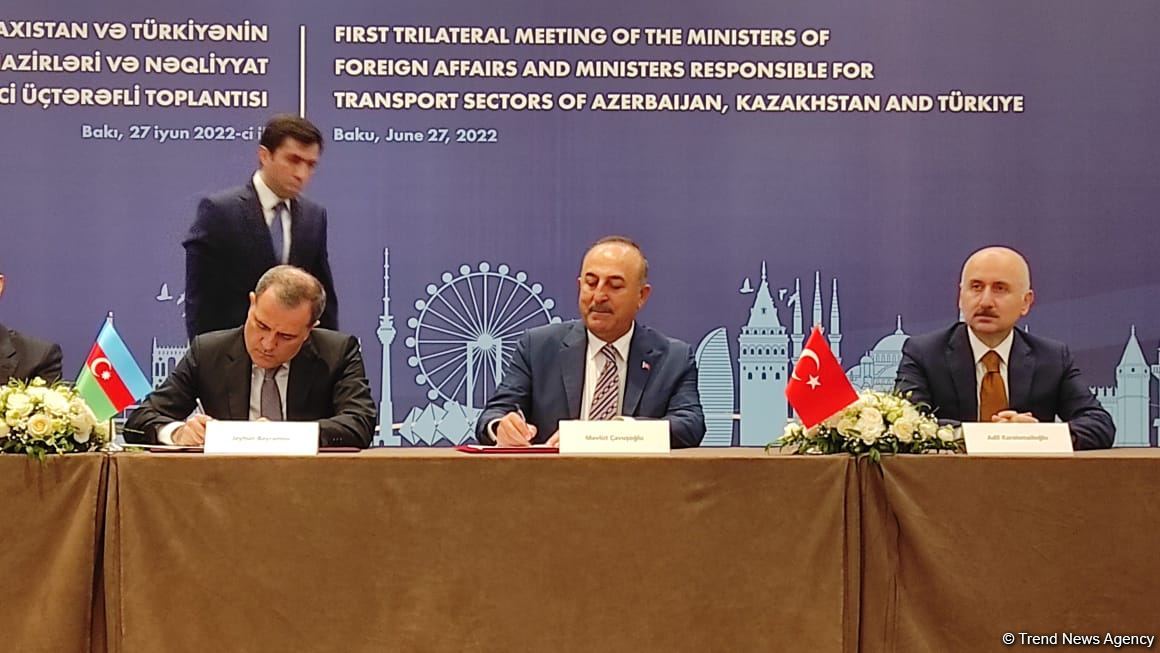 Azerbaijan, Türkiye, and Kazakhstan have signed a declaration on transport cooperation as part of a trilateral meeting.

Foreign ministers of three countries – Jeyhun Bayramov, Mevlut Cavushoglu, and Mukhtar Tileuberdi – signed the Baku Declaration on Cooperation in Transport and Communications spheres on the results of the first trilateral meeting held in Baku on June 27.

The document stresses the importance of the full operation of new transport corridors in the region, including the railways and highways mentioned in the trilateral declarations signed by the Russian, Azerbaijani, and Armenian leaders in November 2020 and January 2021.

The ministers also underlined the importance of developing the corridor that would link Azerbaijan’s Eastern Zangazur Region and Nakhchivan, declaring it as a prospective part of the Middle Corridor.

Addressing a press conference after the meeting, the Azerbaijani Foreign Minister, Jeyhun Bayramov, said that construction work needed to be completed to fully operate the Baku-Tbilisi-Kars railway.

The minister also spoke about the need to increase cargo transit through the Caspian Sea. He further stressed the importance of building a fiber-optic cable route between East and West, accelerating the implementation of the Trans-Caspian Fiber Optic Project. Bayramov also emphasized the significance of cooperation in the area of telecommunications satellite services between Azerbaijan, Türkiye, and Kazakhstan.

For his part, Turkish Foreign Minister Mevlut Cavusoglu said that Türkiye supported the normalization of relations between Azerbaijan and Armenia and added that “the development of the transport sector is to result in regional prosperity. According to him, the countries expect “the soonest opening of the Zangazur corridor.”

The next meeting in the trilateral format will be held in Kazakhstan.

The trilateral meeting in Baku was aimed at reinforcing the existing coordination between the three countries and strengthening regional connectivity based on mutual interests. This cooperation is supposed to increase the potential of the Trans-Caspian East-West Middle Corridor, which starts from Southeast Asia and China, runs through Kazakhstan, the Caspian Sea, Azerbaijan, Georgia, Türkiye, and further to European countries.

Meanwhile, Azerbaijan has focused on projects in the Zangazur corridor, including motorways and rail lines.

Independent analysis suggests that the Zangazur corridor will not only restore the shortest connection between Azerbaijan’s mainland and its exclave of Nakhchivan but will also form an important link in the East-West and North-South transport corridors. Türkiye will be able to speed up its exports to Central Asia by a shorter route. The launch of the multi-modal corridor is said to benefit all regional countries and contribute to the Eurasian trade and transport communications that incorporate the regional economies with a nominal GDP of $1.1 trillion. The Central Asian exports will go on an uninterrupted overland route toward Türkiye and Europe should the corridor comes online.