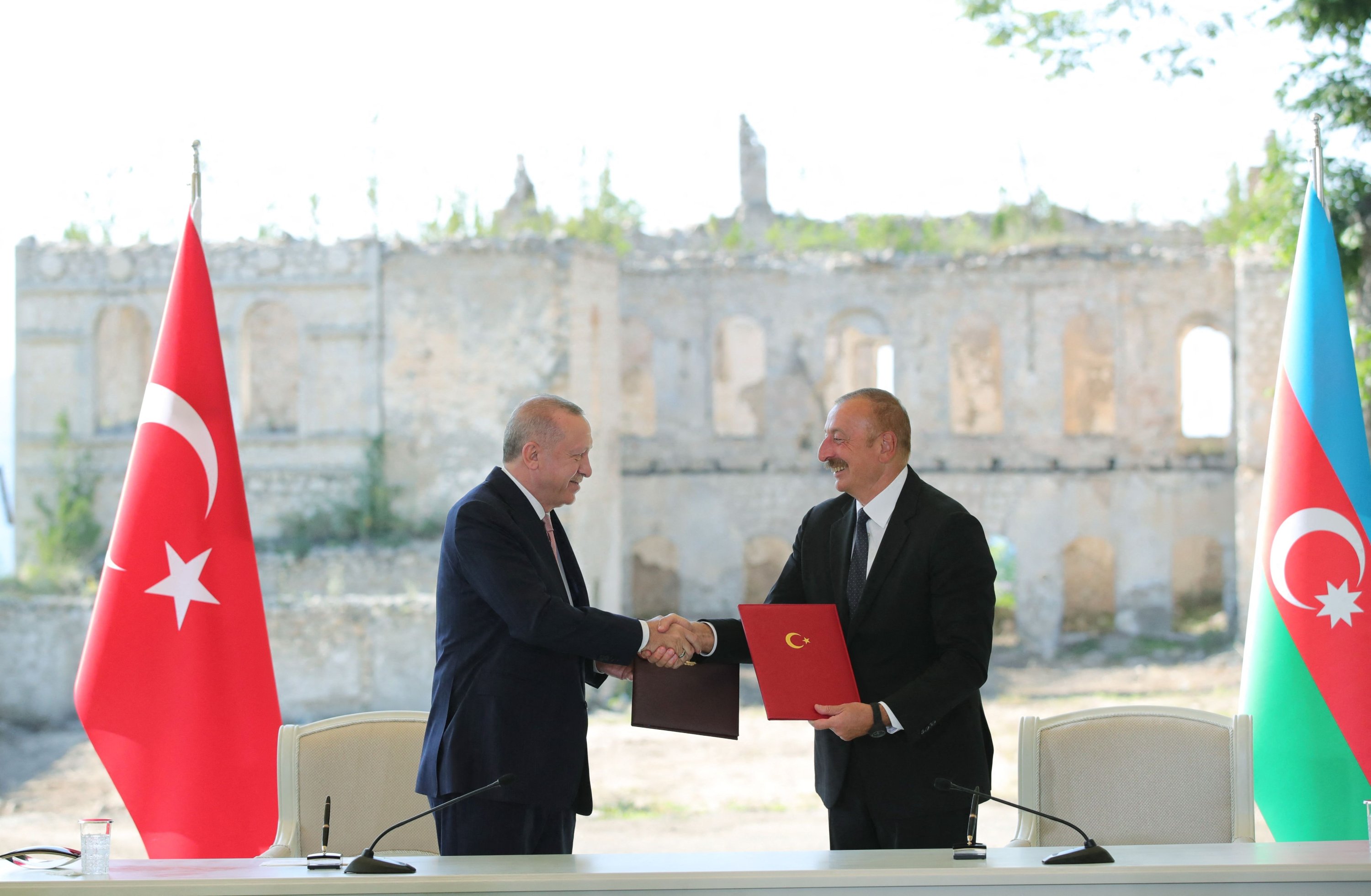 Azerbaijan's relations with Türkiye entered a new phase following the signing of the Shusha Declaration in Azerbaijani city of Shusha on June 15, 2021.

The anniversary of the signing of the Shusha Declaration was marked on Wednesday with a conference in Shusha, which was attended by officials from both countries and examined the progress achieved by the Azerbaijan-Türkiye strategic alliance.

“The Shusha Declaration, signed 100 years after the Kars Agreement, is based on our common history, reflects modern realities, and defines strategic directions of the current and future cooperation between Azerbaijan and Türkiye,” President Ilham Aliyev said in a letter to the event participants.

“The fulfillment of the obligations arising from the Declaration serves to deepen the cooperation between our countries in various fields, regional integration and security, to multiply the national strength of Azerbaijan and Türkiye, and to strengthen their positions of authority in the world," he added in the letter.

The post-war developments in the region set the grounds for stronger cooperation and partnerships between the two nations, which share common ethnic, historical, cultural, religious and linguistic values. The Shusha Declaration was designed to cement and expand Türkiye-Azerbaijan ties across multiple spheres varying from defense to economy, energy, trade, diaspora, media, and other areas of mutual interest into an all-new era of the decades-long alliance. With the pact’s signing, the Azerbaijani authorities have reaffirmed Ankara as the country’s number one and closest ally in the world.

“Every issue reflected in it [Shusha Declaration] is of great importance. I would like to highlight two issues among them. First, the issue of cooperation in the field of defense. The issues of defense industry and mutual military assistance are reflected in this Declaration. This is a historic achievement. We are showing again that we will always be together. We will continue to ensure each other's security, just as Turkey and Azerbaijan have been together on all issues so far. This will continue to be the case," Azerbaijan’s President Ilham Aliyev said at the ceremony for signing the Declaration in Shusha on June 15, 2021.

The Turkish and Azerbaijani parliaments ratified the Shusha Declaration in February 2022, which came into effect the same month.

The defense cooperation is a key focus of the document given the shifts in the geopolitical landscape of the region as a result of Azerbaijan’s restoration of sovereignty in its Karabakh (Garabagh) region after almost three decades.

The document also calls for joint efforts to modernize the armed forces of the two fraternal countries, implement measures aimed at strengthening defense capabilities and military security, increase the joint capacity of the armed forces of the two countries and establish close cooperation in modern weapons and ammunition management. The Security Councils of the two countries are tasked with holding joint meetings on national security issues and discussing regional and international security developments concerning the national interests of Türkiye and Azerbaijan.

Simultaneously with the war in the Karabakh region, President Aliyev revealed Azerbaijan’s intention to strengthen the national army based on the Turkish model but on a smaller scale.

Two weeks after the signing of the Shusha Declaration, on June 28, 2021, the Azerbaijani and Turkish Armed Forces teamed up in massive joint military drills. In October 2021, special forces from the two countries and Pakistan attended trilateral army games in Azerbaijan. The Azerbaijani forces joined also the recent “Efes-2022” international exercises which took place between May 9 to June 9 of this year.

The modernization of the Azerbaijani army gained momentum in October and November 2021 when all-new Commando units of the Azerbaijani Armed Forces were launched in the liberated lands. Before joining the army’s new “blue-beret” branch, the commando personnel have been through weeks-long “Commando preparation” courses in Türkiye. The Azerbaijani Commandos even adopted the world-renowned slogan of their Turkish counterparts.

Azerbaijan and Türkiye also explored the new areas of the military-technical cooperation in the TEKNOFEST Aerospace and Technologies Festival in Azerbaijan in May 2022. Turkish defence manufacturers demonstrated their latest innovations and products at the festival which attracted more than 300,000 visitors. On the sidelines of the hi-tech gala, officials from numerous Turkish and Azerbaijani institutions and organizations inked cooperation documents, which addressed the exports of cutting-edge defense products and expertise to Azerbaijan. According to various media reports, Azerbaijani authorities revealed their interest in the purchase of T-129 ATAK helicopters from Türkiye.

In the meantime, Turkish defense industry representatives revealed their plans to use joint production of the cutting-edge military equipment. Turkish Defence Industry Minister Ismail Demir said relevant negotiations were underway with the Azerbaijani authorities to team up for the production of aircraft. Selcuk Bayraktar, CEO of the Turkish Baykar Technology Company, which produces Bayraktar and AKINCI combat drones, also confirmed the interest in developing and manufacturing the cutting-edge aerial devices in Azerbaijan.