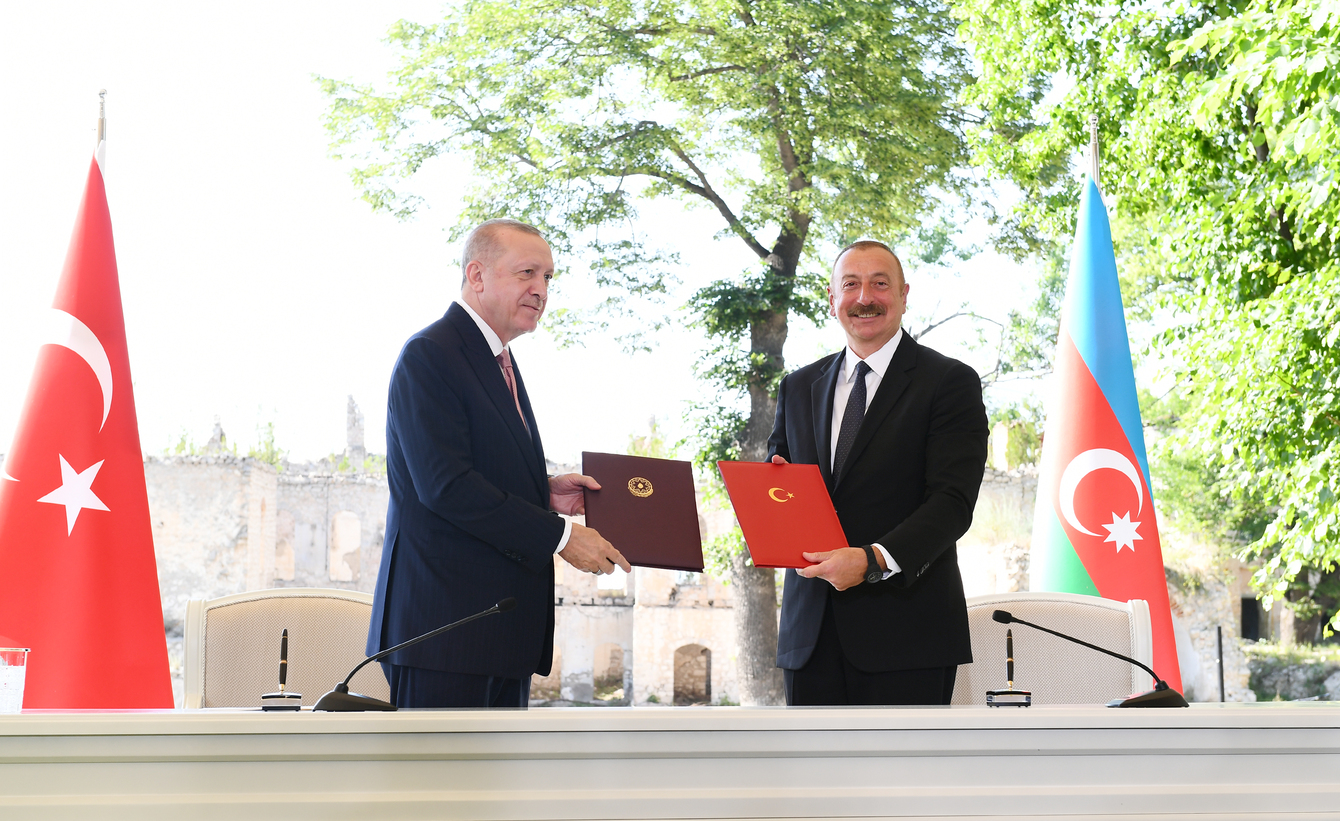 Azerbaijan and Turkey have strengthened ties after the presidents of the two countries signed a joint declaration in the historic Shusha city of Azerbaijan during Turkish President Recep Tayyip Erdogan’s visit on Tuesday.

The document, titled “Shusha Declaration”, aims to facilitate cooperation between Ankara and Baku in the spheres of defense, economy, energy, trade, diaspora and media and other areas of mutual interest. President Ilham Aliyev said the declaration refers to the Kars Agreement that was signed a century ago, which has a great symbolic meaning for the two countries.

“The Declaration covers many important issues. At the international level, it dwells upon our cooperation, joint activities, political relations, economic and trade relations, culture, education, sports, youth policy and practically all other areas. It demonstrates the importance of energy security and the Southern Gas Corridor for Turkey, Azerbaijan and Europe,” President Aliyev said, according to his official website.

“Every issue reflected in it is of great importance. I would like to highlight two issues among them. First, the issue of cooperation in the field of defense. The issues of defense industry and mutual military assistance are reflected in this Declaration. This is a historic achievement. We are showing again that we will always be together. We will continue to ensure each other's security, just as Turkey and Azerbaijan have been together on all issues so far. This will continue to be the case," President Aliyev added.

The document also calls for joint efforts to modernize the armed forces of the two fraternal countries, implement measures aimed at strengthening defense capabilities and military security, increase the joint capacity of the two countries' armed forces and establish close cooperation in modern weapons and ammunition management. The Security Councils of the two countries are tasked with holding joint meetings on national security issues and discussing regional and international security developments concerning national interests of Turkey and Azerbaijan.

The Azerbaijani military fought a bloody 44-day war against Armenian forces in the Karabakh (Garabagh) region last year. The modern equipment purchased from Turkey contributed to Azerbaijan’s victory in the war.

Turkish Bayraktar TB2 unmanned aerial vehicles (UAV) played a crucial role in giving Azerbaijan an upper hand in the last year’s war with Armenia in the Karabakh region, an internationally recognized territory of Azerbaijan. The drone fleet of the Azerbaijani army, which includes Bayraktar TB2 and cutting-edge Israeli-made UAVs and loitering munitions, is said to have destroyed more the 200 pieces of armour and artillery systems of Armenia during the war, which took place between September 27 and November 9, 2020.

President Erdogan said the defense cooperation between Ankara and Baku goes beyond the transfer of equipment, adding that the two countries are collaborating on defense projects.

Turkish weapons have been widely used in modernizing the Azerbaijani army’s arsenal in recent years. Between January and April 2021, Azerbaijan was the second-largest buyer of Turkish weaponry after the United States. The value of arms exports to Azerbaijan was $117.3 million in the same period.