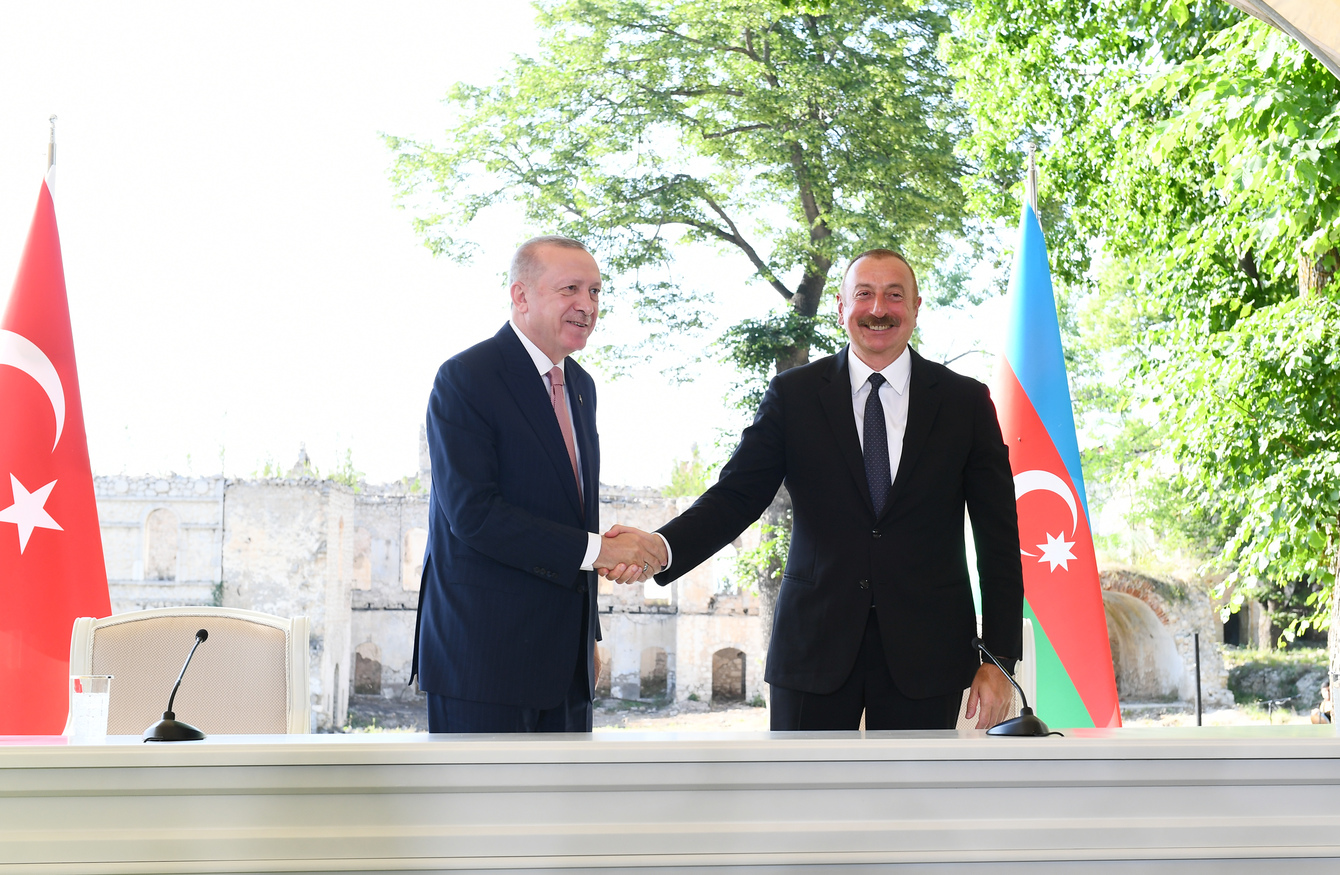 Azerbaijan and Turkey are scaling up efforts towards creating the strategic Zangazur corridor that will connect the two countries through multi-modal communication routes and form a part of a greater East-West trade and transportation corridor.

Azerbaijani President Ilham Aliyev said the Shusha Declaration that was signed in the Azerbaijani city of Shusha during Turkish President Recep Tayyip Erdogan’s visit covers the opening of the corridor.

“The Declaration contains unequivocal statements about the opening of the Zangazur corridor. This is an outcome of a new geopolitical situation that has emerged as a result of the second Karabakh war,” President Aliyev said, according to his official website President.Az.

“Today, we are not only talking about the Zangazur corridor, which will connect Turkey and Azerbaijan by rail and road; we are creating this corridor through tangible work. It is crucial that this issue is reflected in the Joint Declaration on Allied Relations," he added.

The Zangazur corridor is a multi-modal transport route that will restore the shortest connection between Azerbaijan’s mainland and its southwestern exclave of Nakhchivan. The route will be further extended to eastern parts of Turkey.

According to the agreement, Armenia guarantees the safety of transport links between the western regions of Azerbaijan and Nakhchivan in order to organize an unimpeded movement of citizens, vehicles and goods in both directions. The construction of new transport communications linking Nakhchivan with the western regions of Azerbaijan would be ensured by the agreement of the signatories.

President Erdogan has expressed Turkey’s support for the creation of the Zangazur corridor.

“We consider the Southern Zangazur Corridor project of Azerbaijan very important and we support it. The implementation of this project will open a new common corridor from East to West that can be used by everyone. This is very important,” the Turkish President said.

Meanwhile, the Armenian authorities have been evading discussions on the opening of the Zangazur corridor, despite the obligations Yerevan took under the tripartite ceasefire agreement, which ended last year's Karabakh war. Armenia’s acting Prime Minister Nikol Pashinyan said in May that Armenia had never discussed and would not consider the creation of such a corridor. He claimed that the regional connections included in the tripartite statement did not refer to the Zangazur corridor.

Zangazur historically was an Azerbaijani region that now forms the southern part of modern-day Armenia and a portion of the territory of Azerbaijan in the country’s Zangilan, Gubadli and Lachin districts.

The Zangazur region, inhabited by the Turkic tribes, was a part of the Seljuk empire during its 150-year-long rule in the 11th and 12th centuries, which has further expanded the Turkish-Islamic influence within the region. Starting from the 13th century, Zangazur was invaded by Mongol-Tatar tribes and the Timurid Empire. From the 15th to the 18th centuries, the region was a part of the medieval Azerbaijani states of Garagoyunlu, Aghgoyunlu, and Safavids.

Demographic changes in Zangazur took place during the reign of Tsarist Russia and the Soviet Union. As a result of the massacres committed by Armenian armed groups in 1905-1907 and 1914-1920 in Zangazur, about half a million indigenous Azerbaijanis and other Muslim locals were killed. In those years, 115 Muslim villages in Zangazur have been wiped off the face of the earth.

In 1933, the territory of the Armenian SSR was divided into districts and the name Zangazur was replaced with new district names, including Gafan, Gorus, Garakilsa (Sisian), and Mehri.

In 1988, Azerbaijanis living in Zangazur were forcibly expelled from their ancestral lands as part of the last phase of their illegal deportation by Armenia. Hundreds of historical, material and cultural monuments belonging to Azerbaijanis were destroyed following the brutal displacement of the Azerbaijanis through acts of terror and ethnic cleansing.