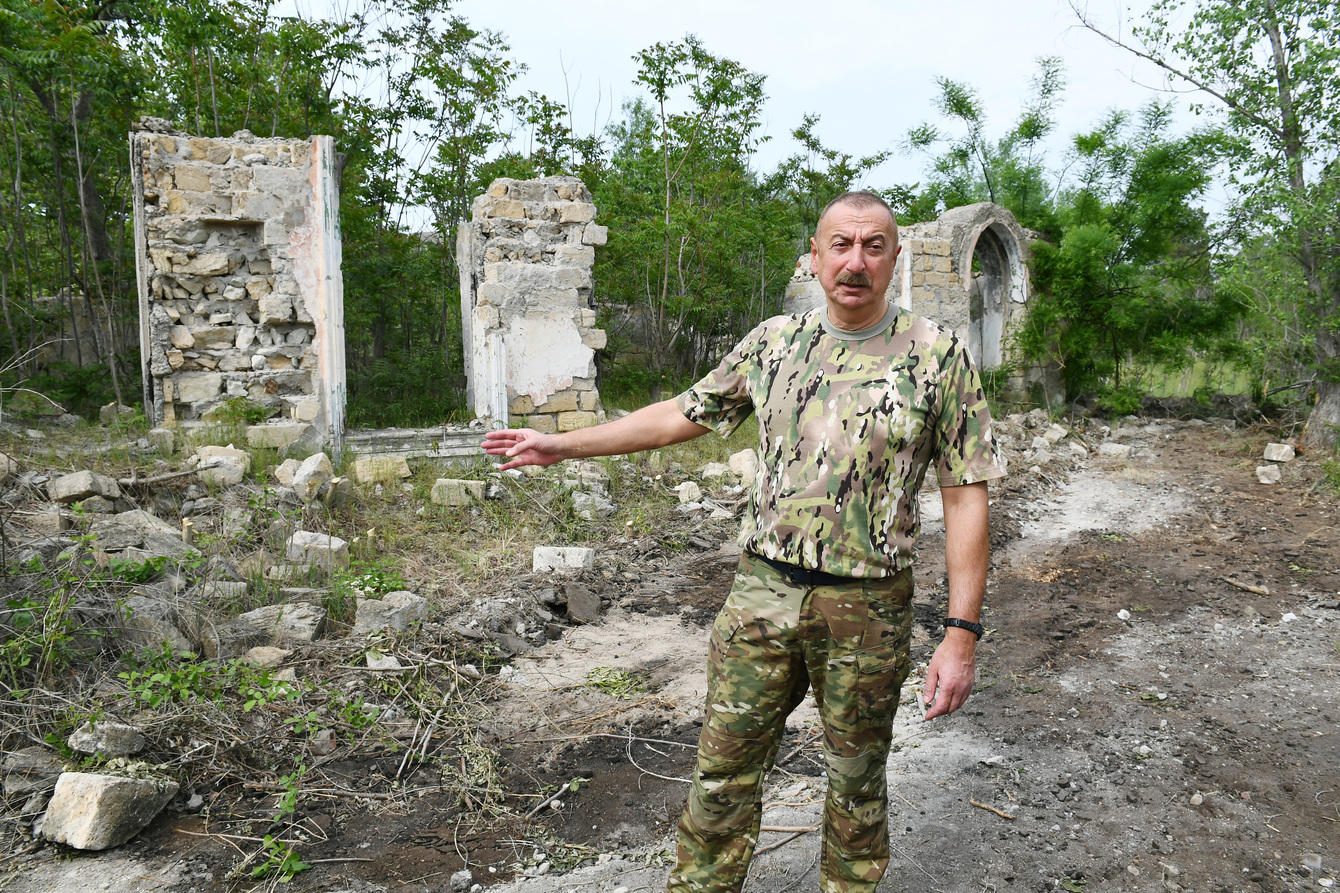 President Ilham Aliyev in front of the Minjivan railway station, which was destroyed by Armenian armed forces. / President.Az

Azerbaijan is working to restore the transportation infrastructure in its liberated Karabakh region, which suffered Armenian vandalism heavily during nearly three decades of illegal occupation.

President Ilham Aliyev visited the region this week to check the development of the restoration projects, including the reconstruction of the war-hit railway. The railway line passing through Zangilan stopped operating after Armenia's forces illegally occupied the region in 1993.

“The railway will be rebuilt now, and so will the station. The process of reconstruction of the railway has begun,” President Aliyev said Monday, adding that the line will connect Horadiz city in the Fuzuli district and Aghband settlement in the Zangilan district.

The Horadiz-Aghband railway used to be a part of the Baku-Aghband route stretching from Azerbaijan’s capital city to the southwestern Zangilan district. The route served as a vital link in facilitating inland trade and passenger transportation during Soviet times. The last train operating along this segment was seen in July-August of 1993, shortly before Zangilan was occupied by Armenia’s forces in October.

Implementation of infrastructure projects became possible after Azerbaijan liberated its territories as part of the last year’s 44-day-long counter-attack operations. On February 15, President Aliyev laid the foundation stone for the Horadiz-Aghband railway in the district of Fuzuli.

The railway line, which measures 100 kilometers in length, will facilitate the movement of cargo and passengers across the liberated territories and is expected to contribute to the overall restoration campaign in the Karabakh region by accelerating the supplies of construction materials and equipment to dozens of settlements.

President Aliyev said the railway will enable the establishment of a railway connection between the main part of Azerbaijan and the Nakhchivan Autonomous Republic, an exclave on the country’s southwestern corner.

“The railway will be extended through the Zangazur corridor to the Nakhchivan Autonomous Republic. Zangilan belongs to the East Zangazur region from a geographical point of view and is located in East Zangazur. West Zangazur is also our historical land, and the Zangazur corridor will pass through that land. Thus, the main part of Azerbaijan will be connected with the Nakhchivan Autonomous Republic by rail,” the president explained.

Zangazur is a historical region that forms the southern part of modern-day Armenia and a small portion of the territory of Azerbaijan in the country’s Zangilan, Gubadli and Lachin districts.

The Zangazur region, inhabited by the Turkic tribes, was a part of the Seljuk empire during its 150-year-long rule in the 11th and 12th centuries, which has further expanded the Turkish-Islamic influence within the region. Starting from the 13th century, Zangazur was invaded by Mongol-Tatar tribes and the Timurid Empire. From the 15th century to the 18th century, the region was a part of the medieval Azerbaijani states of Garagoyunlu, Aghgoyunlu, and Safavids.

Demographic changes in Zangazur took place during the reign of Tsarist Russia and the Soviet Union. As a result of the massacres committed by Armenian armed groups in 1905-1907 and 1914-1920 in Zangazur, about half a million indigenous Azerbaijanis and other Muslim locals were killed. In those years, 115 Muslim villages in Zangazur have been wiped off the face of the earth.

In 1933, the territory of the Armenian SSR was divided into districts and the name Zangazur was changed with new district names such as Gafan, Gorus, Garakilsa (Sisian), and Mehri.

In 1988, Azerbaijanis living in Zangazur were expelled forcibly from their ancestral lands as part of the last phase of their illegal deportation by Armenia. Hundreds of historical, material and cultural monuments belonging to Azerbaijanis were destroyed following the brutal displacement of the Azerbaijanis through acts of terror and ethnic cleansing.

Zangazur corridor will restore the shortest connection between Azerbaijan’s mainland and its southwestern exclave of Nakhchivan. The restoration of the corridor was included in the tripartite ceasefire agreement signed by Armenia, Azerbaijan, and Russia.