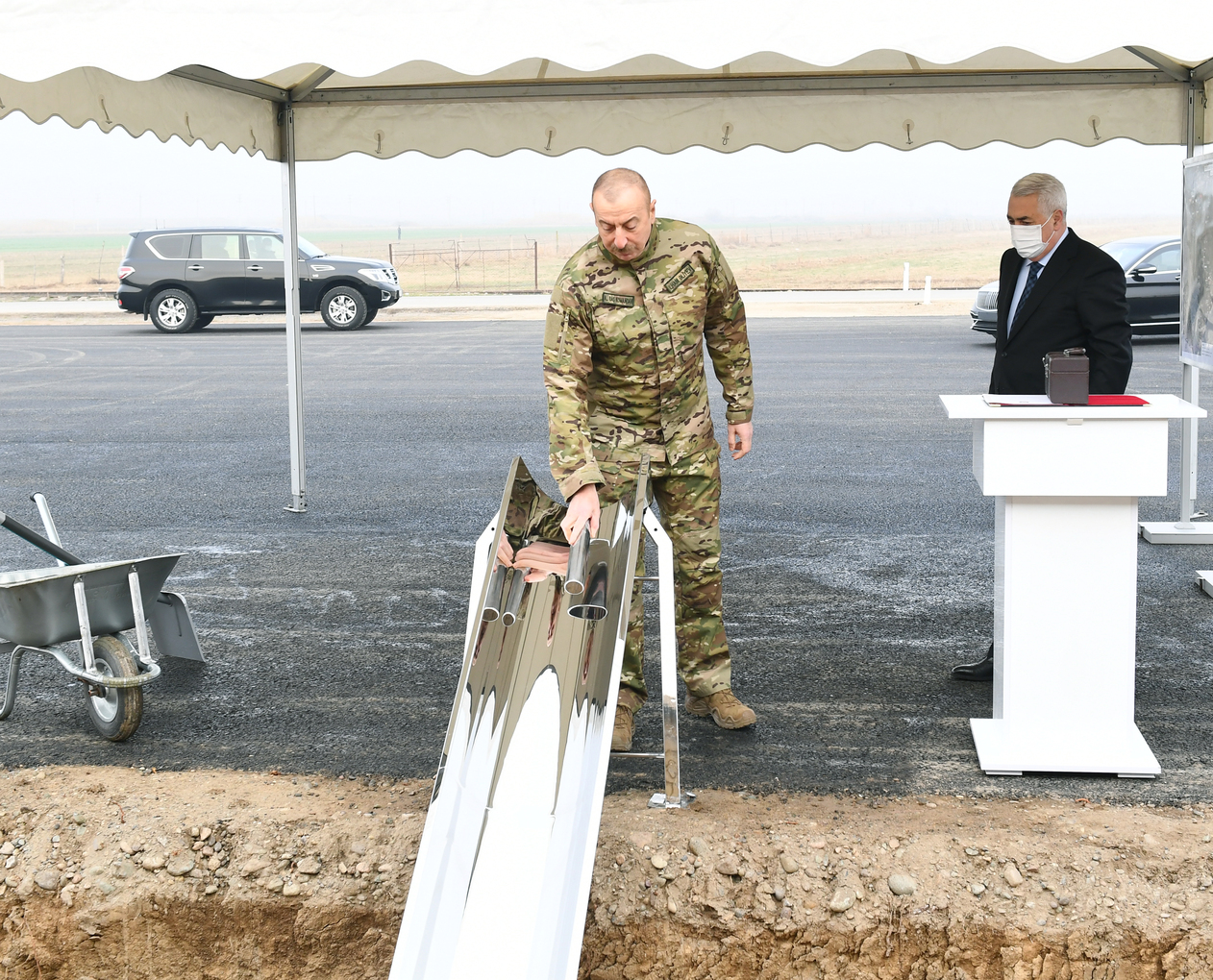 President Ilham Aliyev of Azerbaijan lays the foundation stone of the Horadiz-Aghband railway in the Horadiz settlement of the Fuzuli district, Azerbaijan, February 14, 2021 / President.Az

Implementation of infrastructure projects by Azerbaijan in the Karabakh region, an internationally recognized territory of the country, are expected to reshape the transportation map of the entire region by revitalizing old and creating new transport connections.

Last week, President Ilham Aliyev of Azerbaijan laid the foundation stone for a 100-kilometer-long railway in the Karabakh region. The rail line will enable a connection between the Horadiz settlement in Fuzuli district and the Aghband settlement in the district of Zangilan. Both Fuzuli and Zangilan districts have been liberated from Armenia’s occupation during the Azerbaijani army’s counter-attack operations last year.

“This railway is of great strategic importance. It will be of great importance both for the citizens’ travel to the liberated lands and for cargo transportation. On the other hand, this railway will extend to Nakhchivan,” President Aliyev said, adding that the creation of the Nakhchivan corridor is addressed in a special provision of the trilateral ceasefire statement signed by Azerbaijan, Armenia and Russia on November 10, 2020, according to President.Az.

Nakhchivan, a southwestern exclave of Azerbaijan, sets to reconnect with the mainland after almost three decades of isolation. Surrounded by Armenia, Iran and Turkey, currently, the region is not connected via direct overland routes with mainland Azerbaijan. Nakhchivan became an exclave separated from the Azerbaijani mainland after the Soviet occupation of the South Caucasus region in 1920. Following the region’s incorporation, Soviet rulers inked a decision to transfer some of Azerbaijan's territories, including its historic region of Zangezur, which borders Nakhchivan, to the newly-created Armenian state.

Armenia’s military aggression against Azerbaijan in the early 1990s and occupation of the Nagorno-Karabakh (Daghlig Garabagh) region, which is an internationally recognized part of Azerbaijan, aggravated Nakhchivan’s isolation. All kinds of energy, electricity, and transport connections, including highways and railways to and from Nakhchivan was closed by Armenia along with the occupation of the Nagorno-Karabakh region and seven surrounding districts of Azerbaijan in a 1991-1994 war. Currently, overland and air connections with Nakhchivan are available either via Iran in the south or through Turkey in the west.

President Aliyev went on to add that the railway infrastructure will extend to Turkey, as well, creating the second railway connection with Turkey in addition to the Baku-Tbilisi-Kars railroad. Vusal Gasimli, executive director of the Center for Analysis of Economic Reforms and Communications (CAERC) of Azerbaijan says the cost of building a railway between Azerbaijan and Turkey through the territory of Armenia is estimated at $434 million. According to him, the rail line will span from the far eastern Kars city of Turkey to Nakhchivan, then to the town of Meghri in Armenia and the Zangilan district of Azerbaijan onward to the final destination in Baku. The annual freight transportation volume of the route is estimated to be at 10 million tons, Gasimli says.

Meanwhile, President Aliyev said in addition to the Azerbaijan-Turkey rail connection, a railway line from Russia to Armenia may be opened through the territory of Azerbaijan; a railway communication will be established between Russia and Iran through the territory of Nakhchivan, as well as Iran and Armenia, and Turkey and Russia will be connected with railway lines.

“We said that transport projects play a special role in the long-term development of the region, ensuring stability and reducing to zero the risk of war,” President Aliyev said, adding that all countries of the region will only benefit from this.

Currently, Armenia and Russia are not connected via railway routes. Turkey uses the Baku-Tbilisi-Kars railway to reach markets in Russia. Iran and Russia have long been planning to establish a mutual railway connection on the International North-South Transport Corridor; however, the realization of the project is still pending. Although the government of Armenia approved an initial project to build a rail line to Iran, no practical steps have been taken so far to kick off the construction of the railroad with an estimated cost of $3-4 billion.

Projects for creating a robust railway network in the region came under the spotlight after the Azerbaijani army’s 44-day-long successful counter-offensive operations against Armenia’s attacks in the Karabakh region. The war that ensued on September 27 last year marked the largest clashes between the sides since the early 1990s when Armenia occupied the Nagorno-Karabakh region and seven surrounding districts of Azerbaijan. By the end of the war in a ceasefire on November 10, the Azerbaijani forces liberated over 300 settlements, including five major cities in the Karabakh region from Armenia’s nearly three-decade-long occupation. Armenia returned three more occupied districts to Azerbaijan in non-combat conditions as part of the trilateral ceasefire agreement.