Azerbaijan Pushes Ahead with Plans to Export Green Energy 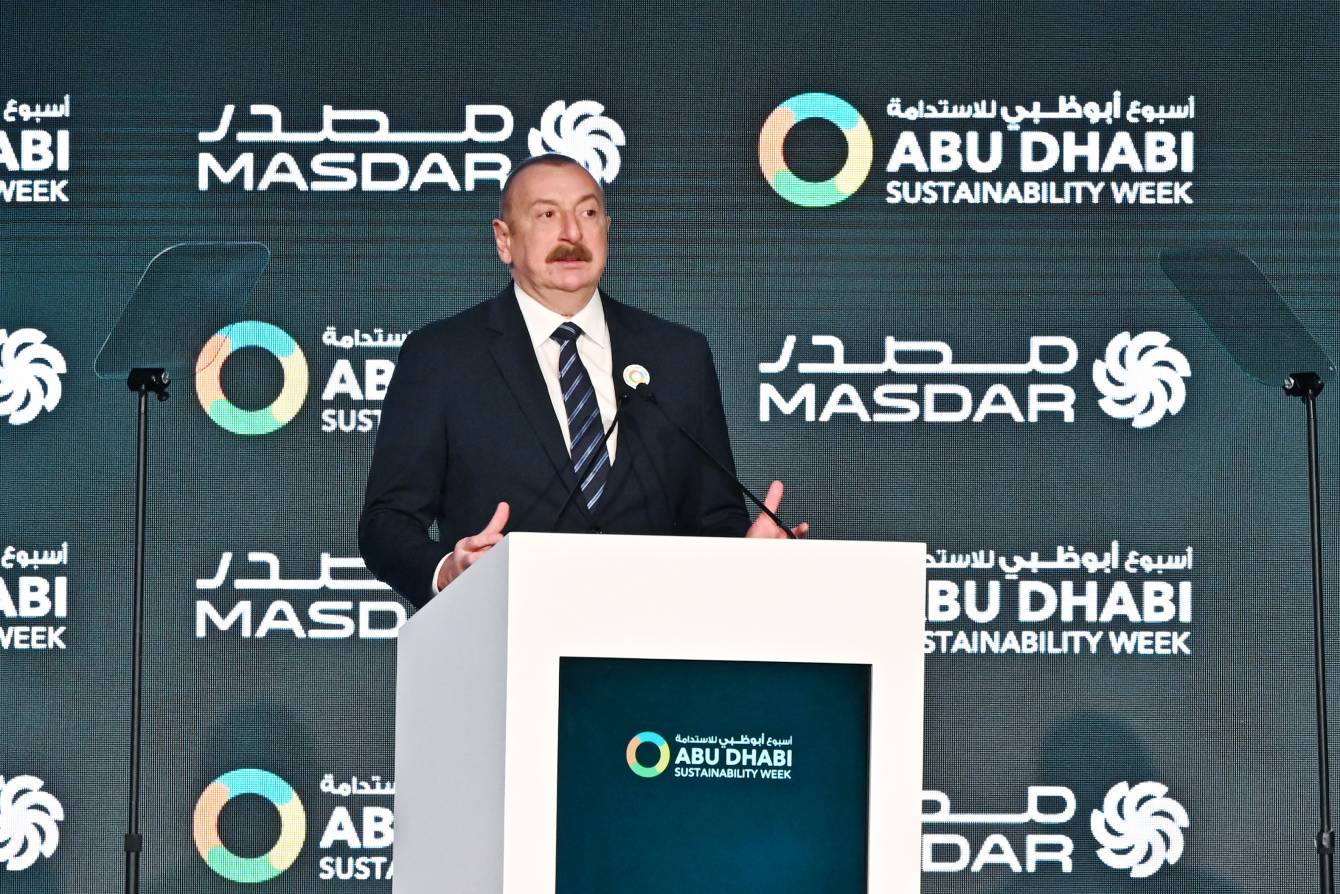 President Ilham Aliyev delivers a speech at the opening ceremony of the Sustainability Week in Abu Dhabi, the United Arab Emirates, January 16, 2022 / President.Az

The details of the strategy of Azerbaijan for exporting green energy were high on the agenda of President Ilham Aliyev during his recent visit to the United Arab Emirates (UAE), where he attended the inauguration of the Sustainability Week in Abu Dhabi.

“Our program with respect to renewables has an entirely different agenda. First, because there is enormous potential. Second, it will help us diversify our export and, of course, create a new ecologically-friendly sector of our economy,” President Aliyev said in his speech at the opening ceremony of Abu Dhabi Sustainability Week on Monday, according to his press service.

According to President Aliyev, Azerbaijan is keen on involving more international partners in leveraging the vast renewable energy potential of the country and turning itself into a significant source of green energy exports. Collaboration with international actors will help Azerbaijan produce up to 22 gigawatts of wind and solar energy, said President Aliyev.

On the sidelines of the sustainability event, Azerbaijan’s national oil and gas company SOCAR and the UAE-based renewable energy operator Masdar signed a deal to develop four gigawatts (GW) of wind and solar power plants in Azerbaijan. The cooperation supposes a two-stage development process, including short-term and mid-term projects, with the latter allowing to ultimately produce a total of 10 GW of green energy.

The agreement expands Masdar’s participation in renewable energy projects in Azerbaijan. In March 2022, the company broke the ground for a 230-megawatt (MW) solar power plant in the South Caucasus country. Masdar’s plant will reportedly become operational in 2023 with an overall energy output of nearly half a billion kilowatt-hours of electricity per annum, which is enough to supply power to over 110,000 houses.

The other Gulf region energy giant involved in the renewable energy production in Azerbaijan is the Saudi-based ACWA Power. In January of the last year, ACWA Power laid the foundation stone of a 240-MW wind energy farm, which is expected to go online in the second quarter of 2023.

The two plants will absorb a total of nearly $530 million investment.

International cooperation fits in with the Azerbaijani government’s plans to increase the share of renewables in the country’s overall energy production to 30 percent by 2030. For this purpose, Azerbaijan has adopted the Law on the Use of Renewable Energy Sources (RES) and is currently developing a five-year RES strategy.

According to the International Energy Agency, Azerbaijan joined United Nations Framework Convention on Climate Change (UNFCCC) as a non-Annex I country in 1995 and ratified the Paris Agreement, a legally binding international treaty on climate change, in 2016. The government has outlined climate change mitigation actions in a number of sectors, including energy, and put the long-term establishment of energy independence, as well as increasing energy efficiency and supporting greenhouse gas emission mitigation programs at the forefront of national renewable energy strategy.

The state-sponsored support for the growth of renewable energy sources in Azerbaijan is based on four key objectives, including recognition of the potential of alternative and renewable energy sources in electricity generation, exploration of alternative and renewable sources for energy efficiency, provision of jobs in research innovation to develop new energy generation technologies, and diversification and improvement of the domestic energy capacity to ensure energy security.