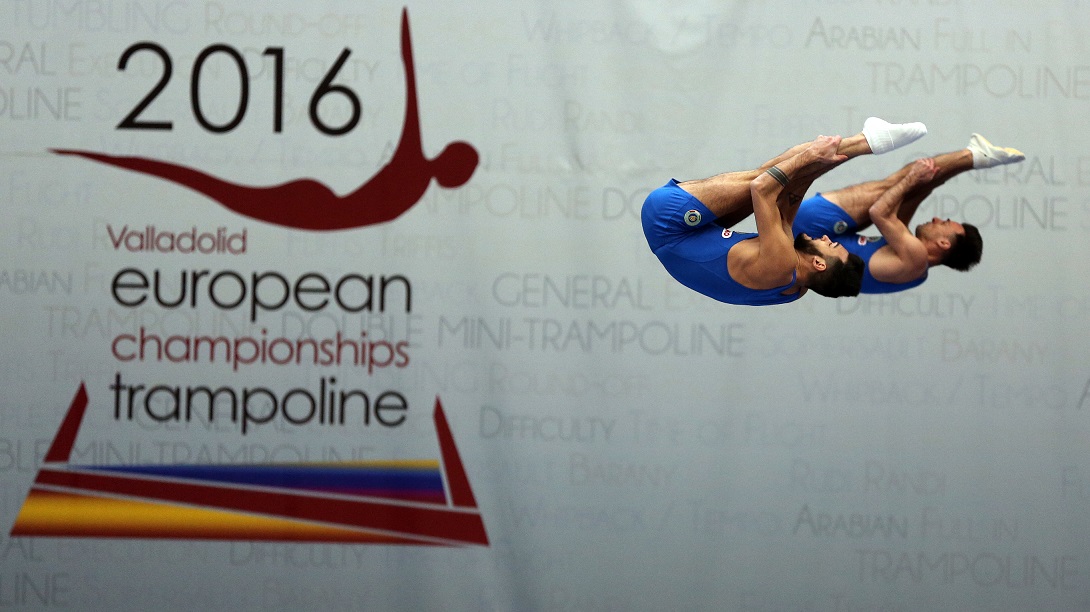 An episode from the 2016 European Championships in Trampoline, Double Mini-Trampoline and Tumbling, Valladolid, Spain / UEG

The Winter Olympics are still underway in South Korea, but that has not stopped the Caspian region from planning to host what are traditionally considered summer sporting events.

The European Union of Gymnastics (UEG) held a draw ceremony at the National Gymnastics Arena in Baku on Monday, where it was decided that the 26th European Championships in Trampoline, Double Mini-Trampoline and Tumbling will take place in the spring in Baku.

Draws, which were overseen by the UEG President Farid Gayibov and the Trampoline Technical Committee led by President Vladimir Zeman, took place in four disciplines: Individual and synchronized trampoline, tumbling, and double mini-trampoline, according to Azertac newa agency.

Over 700 participants have already registered to compete in the games, which will be held from April 12-15, according to the UEG website. The number of athletes is expected to rise as the deadline for nominative entries is set for March 15.

Twenty-four countries from around Europe will be represented by 325 senior gymnasts in all categories of the championship, while the total number of junior sportsmen will be 392, according to latest registration data.

The National Gymnastics Arena of Baku, which served as one of the primary venues for the First European Games in 2015, will be the venue for the games, which are held every two years.

“I would say that the National Gymnastics Arena is one of the best in Europe, as it is specialized in all kinds of gymnastics,” Zeman said during his first visit to Baku in September 2017.

Junior and senior medalists will automatically qualify to participate in the Youth Olympic Games in Buenos Aires, Argentina, which will be held from October 1-6, 2018; and the Second European Games in Minsk, Belarus, from June 21-30 in 2019.