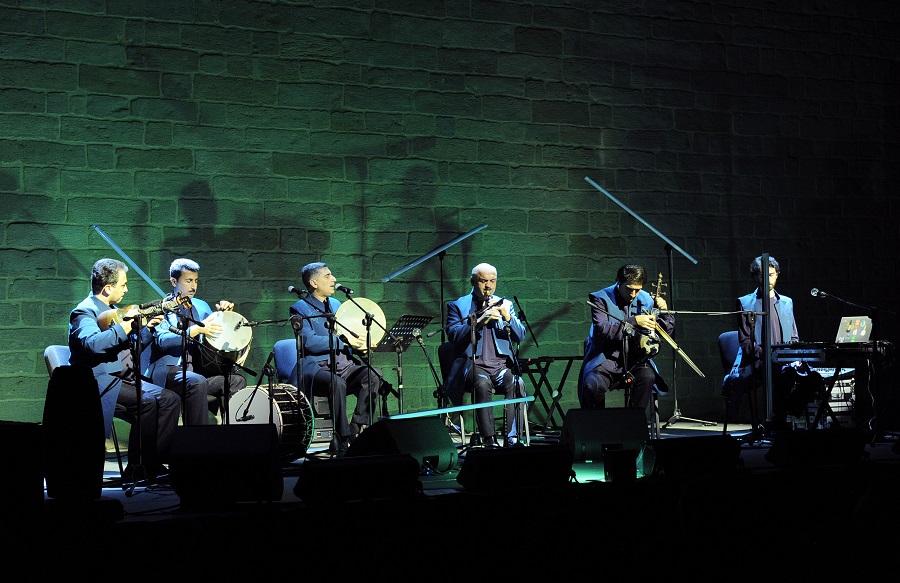 “Bahariyya” music performance took place at the Stone Chronicle Museum as part of 2018 Nasimi Festival of Poetry, Arts and Spirituality.

Azerbaijan is getting ready to host a four-day cultural extravaganza, the Nasimi Festival of Poetry, Arts, and Spirituality, to commemorate the birthday of the famed Azerbaijani poet and thinker Imadaddin Nasimi, whose legacy is officially considered a state asset.

The festival was first held in 2018, and will be held for a second time from September 28 through October 1. Musicians, poets, artists and researchers from across Azerbaijan, Germany, the United States, Finland, Georgia, the United Kingdom, Estonia, Afghanistan, France, China, Canada, Turkey and Israel will be participating.

Similar to the last festival of its kind the festival is being held under the motto “Beyond The Limited Self,” and is organized by the Heydar Aliyev Foundation, the Ministry of Culture, the Heydar Aliyev Center, and PASHA Bank, as well as the Icherisheher (Old City) Historical and Architectural Reserve, the Ministry of Transport, Communications and High Technologies.

More than 20 events are scheduled to take place in multiple cities across the country, with the main events held in the capital city of Baku.

Ali ibn Seyid Muhammad, who was born in 1369, is better known by his pen name Nasimi who wrote his works in Azerbaijani, Persian and Arabic. The poet drew inspiration from a doctrine of the Sufi Islamic tradition known as Hurufism, which identifies the universe as eternal and recognized prophets as the disseminators of religions. Hurufism considered man as a supreme copy of the divine and the key to haqiqa, (“truth”). Nasimi promoted in his works the concept of free will and a principle of universal love and tolerance, looking above the boundaries of man’s imagination and seeking the image of God hidden in every single human being.

Nasimi’s ideology, however, was ignored by Muslim theologians of his time as blasphemy. His isolation by religious circles led to his execution in Aleppo in 1417, where he was skinned alive on the orders of the Turkic warlord and the founder of the Timurid Empire, Amir Timur. In 2017, UNESCO commemorated the 600th anniversary of the poet’s death at its headquarters in Paris.

The first day of the festival will include a crafts fair; a lecture dedicated to the calligrapher levha; and a presentation of new books by German and British researchers Michael Hess and Orkhan Mir-Kasimov. The list of events scheduled for September 28 also includes a screening of a movie directed by Finnish filmmaker Aki Kaurismaki titled “The Other Side of Hope,” as well as a dance show.

The city of Shamakhi, Nasimi’s hometown, will host events such as an exhibition called “Shamakhi Anthology,” and a joint performance of the Zahra Orchestra from Afghanistan and Detache and Inji Ensembles from Azerbaijan. In addition, a statue of Imadaddin Nasimi will be inaugurated on Sunday, September 29.

The following week includes the unveiling of urban art projects in Baku such as “Speaking Walls” and “Designing a Hope,” as well as a poetry performance featuring Leyla Aliyeva, the Vice-President of the Heydar Aliyev Foundation; and Leyla Begim, a poet and playwright from Azerbaijan. The Canadian Clara Furey Dance Company and a theatre performance called “A Terrified Soul” are also slated for the week.

Art exhibitions featuring Ahmet Guneshtekin from Turkey and Azerbaijan’s Farhad Khalilov are part of the agenda. The last day of the festival will bring together young performers of traditional music from Azerbaijan, Turkey, Iran, Jordan and Morocco who will perform with the Azerbaijan State Symphonic Orchestra, led by Dan Tepfer from the United States.

Azerbaijan’s President Ilham Aliyev declared the year of 2019 as the “Nasimi Year,” in order to raise awareness about the role of Nasimi in Azerbaijan’s and global cultural heritage.