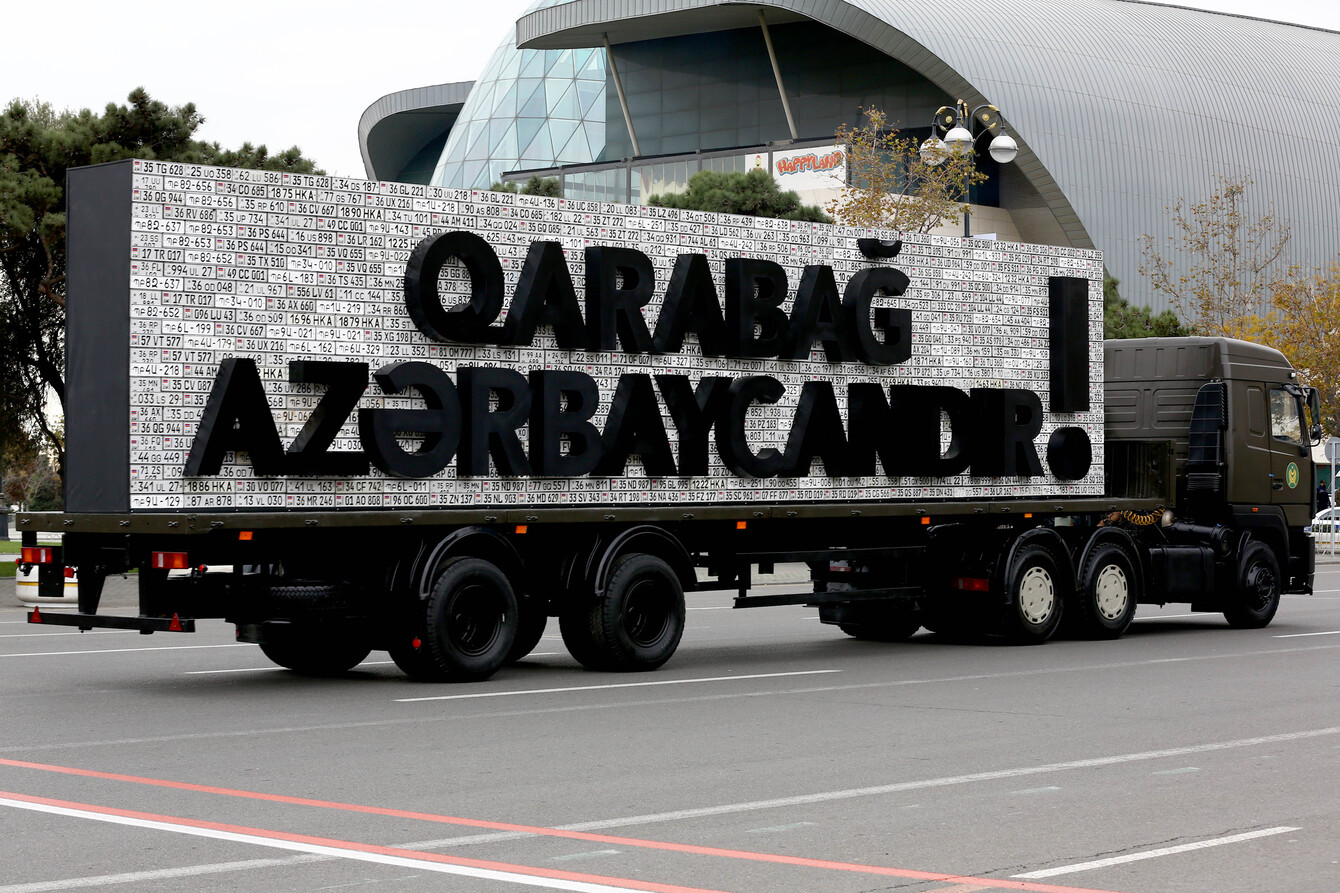 "Qarabağ Azərbaycandır!" or "Karabakh is Azerbaijan! inscription mounted on a wall covered by number plates of the Armenian military vehicles destroyed and captured by the Azerbaijani forces in the 44-day war last year / President.Az

One year has passed since the solemn parade of the Azerbaijan Armed Forces on the Freedom Square in Baku on December 10, 2020. The military march, dubbed “Victory Parade,” marked the liberation of Azerbaijan’s territories from almost three decades of the Armenian occupation.

More than 3,000 military personnel and up to 150 military equipment of the Azerbaijan Armed Forces treaded through the country’s biggest city square in a parade along the Caspian Sea promenade. Newly acquired modern military equipment, missile and artillery installations, air defense systems, air force, as well as warships and boats have been demonstrated in the ceremony observed personally by President Ilham Aliyev and his Turkish counterpart Recep Tayyip Erdogan.

The parade also showcased Armenia’s military hardware and equipment destroyed, captured, or found abandoned on the battlefield during the 44 days of the last year’s war. The trophies showcased at the parade in Baku included fully operational D-20 and D-30 howitzers, various anti-aircraft installations, OSA-1T and KUB short-range air defense systems, anti-aircraft guns, T-72 tanks, and other military equipment. In addition, destroyed and unusable military equipment once belonged to the Armenian Armed Forces were demonstrated at the parade.

Armenia and Azerbaijan have long been at odds over the latter’s Karabakh (Garabagh) region. Following the Soviet Union’s dissolution in 1991, Armenia launched a military campaign against Azerbaijan that lasted until a ceasefire deal was reached in 1994. As a result, Armenia occupied 20 percent of Azerbaijan’s internationally recognized territories. Over 30,000 ethnic Azerbaijanis were killed, and one million were expelled from those lands in a brutal ethnic cleansing policy carried out by Armenia.

On September 27, 2020, the decades-old conflict between the two countries spiraled after Armenia’s forces deployed in the occupied Azerbaijani lands shelled military positions and civilian settlements of Azerbaijan. During the counter-attack operations, Azerbaijani forces liberated over 300 settlements, including the cities of Jabrayil, Fuzuli, Zangilan, Gubadli, and Shusha, from nearly 30-year-long illegal Armenian occupation. The war ended in a tripartite statement signed on November 10 by Armenia, Azerbaijan, and Russia. Under the statement, Armenia also returned the occupied Aghdam, Kalbajar, and Lachin districts to Azerbaijan.

The tripartite agreement addressed the temporary deployment of a Russian peacekeeping contingent comprising 1,960 servicemen, 90 armored personnel carriers, and 380 units of an automobile and special equipment in certain parts of Azerbaijan’s Karabakh region, including the city of Khankendi.