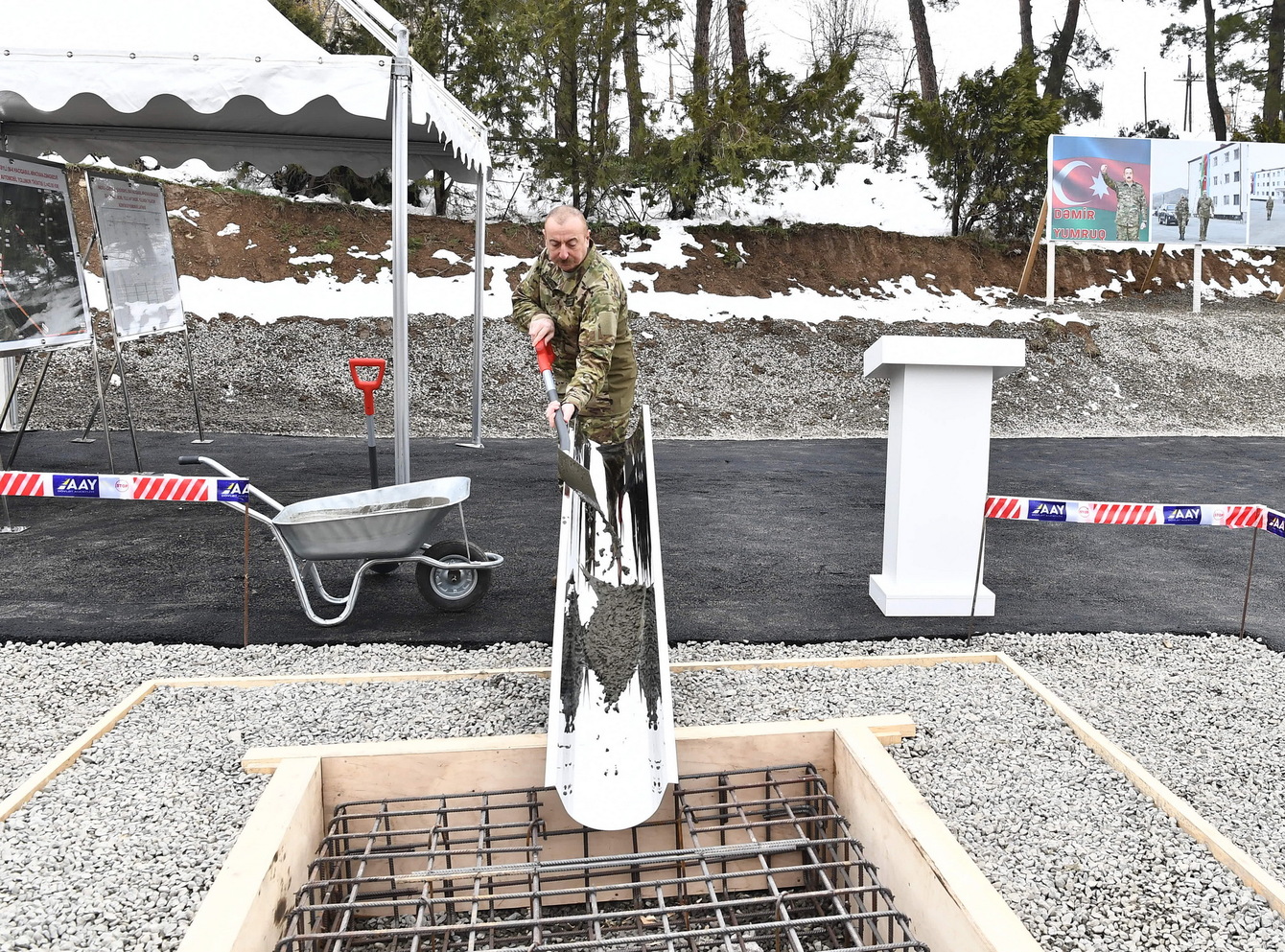 President Ilham Aliyev lays the groundwork for the new Fuzuli-Hadrut highway in the district of Fuzuli, Azerbaijan, March 15, 2021 / President.Az

Azerbaijan’s President Ilham Aliyev laid the groundwork for two new highways in the liberated Karabakh region during his visit to the districts of Fuzuli and Khojavend on Monday.

The first road, dubbed Fuzuli-Hadrut, measures 13 kilometers in length and consists of four lanes. The highway will reportedly facilitate travel to the largest Hadrut settlement in the Khojavend district. The Azerbaijani army retook control over Hadrut after 28 years of the Armenian illegal occupation on October 9 last year.

President Aliyev broke ground for the Hadrut-Jabrayil-Shukurbayli highway in the Hadrut settlement. The four-lane road spans 43 kilometers in length and facilitates uninterrupted connection between Hadrut and the district of Jabrayil. In the Shukurbayli village, the road connects with another highway that leads to the Minjivan settlement of Zangilan and the Zangezur corridor, a multi modal transport route that will open a direct connection between Azerbaijan’s mainland and its southwestern exclave of Nakhchivan.

Shortly after the liberation of territories, the government of Azerbaijan rolled out large-scale construction and restoration projects in various fields, including transport connections. Construction of the first major Fuzuli-Shusha highway, dubbed “the Victory Road,” kicked off in November. The 100-kilometer-long highway facilitates travels to Shusha, the central city in the Karabakh region, the liberation of which was crucial in the retreat of Armenia’s occupying forces.

In February, Azerbaijani authorities revealed plans for the construction of the next road in the Karabakh region. Azerbaijan’s leading highway construction company, the State Agency of Azerbaijan Automobile Roads (SAAAR) teamed up with Turkish Proyapi Company to build a road to Kalbajar, a mountainous district in the north of the Karabakh region. The new road to Kalbajar starts from the Goygol district and cuts through the Omar mountain pass at an altitude of 3,261 meters above sea level on the Murovdagh mountain range.

In addition to highway projects, a new airport is expected to come online in the district of Fuzuli by the end of this year. The Vice President of Azerbaijan Airlines (AZAL) Etibar Huseynov said the runway of the Fuzuli International Airport will be put into operation by the end of 2021, while the airport will be fully ready for operation sometime in April-May in 2022.