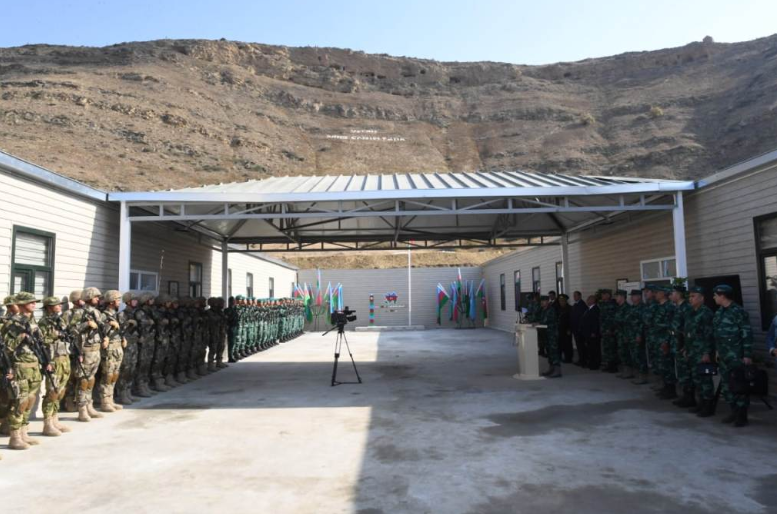 The new Keshikchi Gala border outpost of the Shamkir border troops, which was built at an altitude of 850 meters in the territory of Azerbaijan’s Keshikchidag State Historical and Cultural Reserve, went online on October 6 with the head of the State Border Service, Elchin Guliyev in attendance.

General-Lieutenant Guliyev said the Azerbaijani-Georgian state border, “has always been a border of friendship and strategic partnership,” and there always has been, “a high level of mutually beneficial cooperation with the Georgian border guards.”

Personnel deployed to the Keshikchi Gala outpost are tasked to guard the borders of Azerbaijan and the ancient monuments and cultural heritage located within the area.

The Keshikchidag temple was built in the 5th century by the native population of Caucasian Albania – an ancient Azerbaijani state that was founded sometime before the 6th century BC and lasted until the 8th century AD, unrelated to the modern country Albania. Construction of Christian places of worship and seclusion were built in the wake of Christianity becoming the official state religion. Keshikchidag complex is similar to the other castles built in Caucasian Albania due to its architectural structure characteristics and Azerbaijanis view it as part of their country’s cultural heritage.

Georgian Christians first appeared at Keshikchidag in the 11th century, around six hundred years after its construction, namely during the reign of the famed Georgian king known as David the Builder, who ruled from 1089 – 1125. The temple complex was under the long-term power of the Caucasian Albanian Church until the 13th century. Construction of Georgian buildings at Keshikchidag took place after the 19th century. Prior to this, even in the fundamental studies of Georgian authors, such as Vakhtang Beridze, Giorgi Melikishvili, and Varlam Dondua, the name of David Gareji temple was never mentioned. They considered Mtshkheta and Jvary cathedrals the main architectural monuments of the 6th-8th centuries history of Georgia.

Georgians have a different point of view, however, saying that the temple is an authentic Georgian Orthodox site that was built in the 6th century by David Gareji. Baku refutes the claim, saying the facts are lacking to back up Tbilisi’s claim.

In July, the situation on Azerbaijan’s border with Georgia worsened after a group of Georgian citizens attacked Azerbaijani border guards in Keshikchidag and tried to seize their weapons. While the foreign ministry in Baku called it a provocation and summoned Tbilisi’s ambassador, Georgian authorities downplayed the incident.

Meanwhile, Georgia's Prime Minister Giorgi Gakharia highlighted the high-level relations of Baku and Tbilisi which are good enough to help solve any problem that may occur between the two neighboring nations of the South Caucasus.

"It is a great honor for me to make my first foreign visit to Azerbaijan," Gakharia said in a meeting with Azerbaijan's President Ilham Aliyev on Wednesday, according to President.az. "It is no coincidence that we made our first visit to the Republic of Azerbaijan. We made this decision to prove to our enemy and friend that there is not and cannot be any unresolved issue between Azerbaijan and Georgia."

Georgia and Azerbaijan are friendly nations living in a close neighborhood in the South Caucasus region. The two countries established official diplomatic relations in 1992, shortly after the dissolution of the Soviet Union in 1991. The strategic partnership of Baku and Tbilisi included the realization of significant energy and transportation projects in the region such as the Baku-Tbilisi-Ceyhan oil pipeline, Baku-Tbilisi-Erzurum gas pipeline and the Southern Gas Corridor, as well as the Baku-Tbilisi-Kars railway.