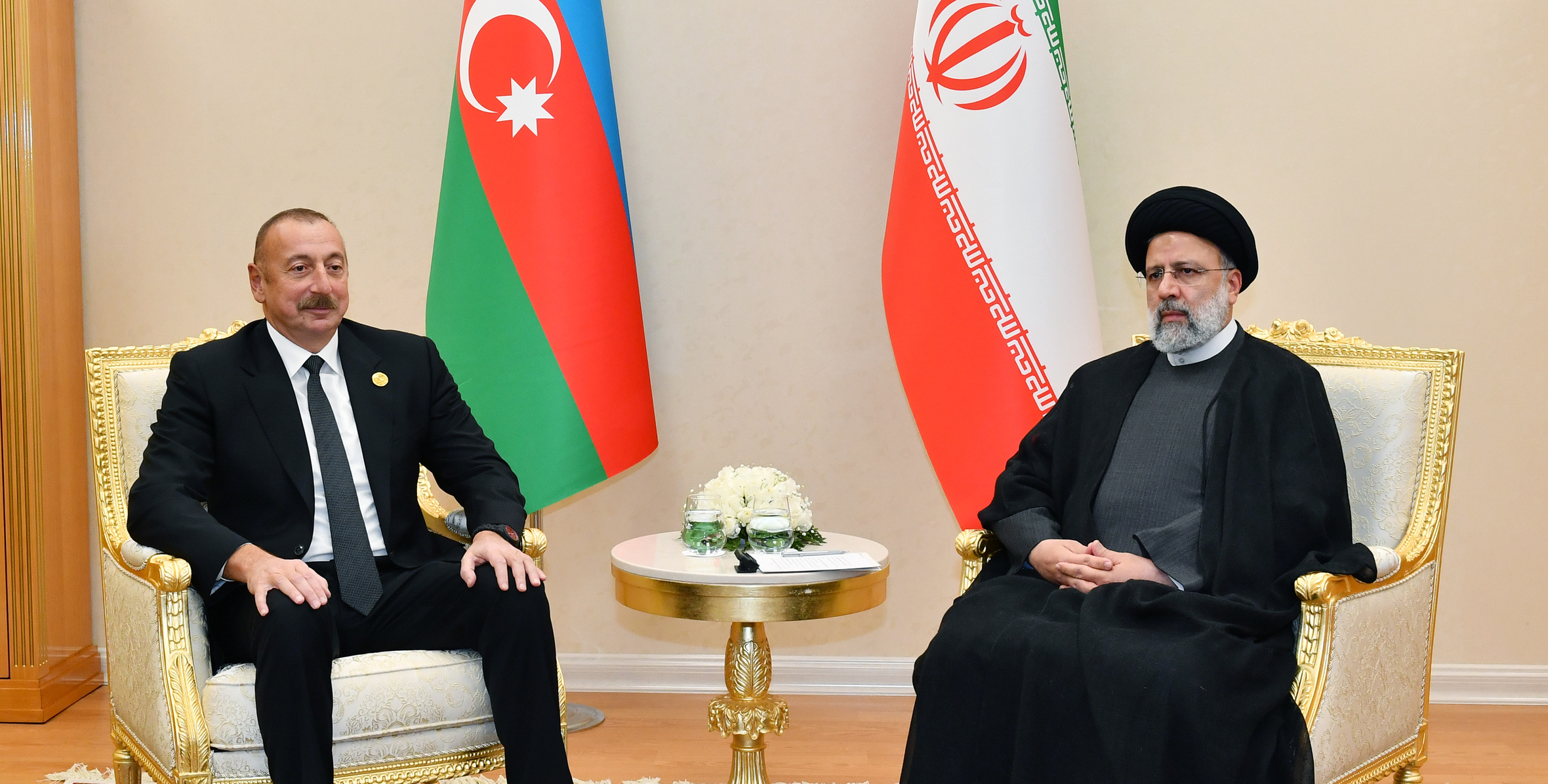 The President of Azerbaijan Ilham Aliyev met with his Iranian counterpart Ebrahim Raisi in the Turkmen capital Ashgabat while attending the 15th summit of the Economic Cooperation Organisation (ECO). / president.ir

Azerbaijan, Iran, and Turkmenistan have agreed on a natural gas swap deal for up to 2 billion cubic meters per year on the sidelines of the 15th Summit of the Economic Cooperation Organisation (ECO) in Ashgabat.

Under the swap deal, Iran will receive gas from Turkmenistan and deliver an equivalent amount to Azerbaijan at the Astara border, Iranian Oil Minister Javad Owji told state TV. According to Owji, “Turkmenistan will sell 5-6 million cubic meters of gas per day to Azerbaijan under the trilateral agreement.” Gas supplies will begin in late December, under the deal.

The gas that Iran will receive from Turkmenistan under the swap agreement will cater to the needs of at least five provinces of the country.

“We will soon pay the first installment to clear the gas debt that we owe to the Turkmen side, after talks that were held earlier,” he told reporters, without revealing the amount of the debt.

Iran was moving to resolve a lingering gas debt dispute with Turkmenistan. Ashgabat claimed in 2016 that Iran owed at least $1.5 billion for gas it had received from Turkmenistan, but Iran disputed the figure.

Iran has the world’s second-largest reserves of natural gas after Russia. With most of its major gas fields located in the country’s south, Iran has imported natural gas from neighboring Turkmenistan since 1997 for further distribution to its northern provinces, especially during the winter seasons.

Azerbaijan, in turn, produces enough gas to cover its demand and sell it to foreign markets. Azerbaijan had 26,427 million cubic meters of gas produced in January-October 2021, 22 percent more than during the same period last year.

Matthew Bryza, a senior fellow with the Atlantic Council’s Global Energy Center, believes that the swap deal will enable Azerbaijan to increase its gas supplies to European countries.

“The recent gas swap deal of 2 billion cubic meters between Azerbaijan, Turkmenistan and Iran is a very significant development. There’s a great demand throughout the world for natural gas in the short run because of all the disruptions caused by the pandemic,” he said.

Meanwhile, the Iranian president and his Azerbaijani counterpart discussed the two countries’ relations during their visit to the Turkmen capital.

“We must resolve our problems, work together to advance our relations and deepen mutually beneficial cooperation. Experience so far shows that when we discuss our issues ourselves, we manage to resolve many of them and overcome the obstacles,” President Ebrahim Raisi said on November 28.

For his part, President Ilham Aliyev said that Baku attaches particular importance to its relations with Tehran.

“We attach great importance to relations with the Islamic Republic of Iran. Our peoples are brotherly peoples. We have lived together for centuries. Our relations are also quite broad. Our peoples share a common history and culture. This is excellent ground. We are writing the modern history of bilateral relations on this basis,” President Ilham Aliyev stated.

The comments by the presidents came following the recent escalation of tensions that have arisen in the past several months over illegal trips of Iranian lorries to certain parts of Azerbaijan’s Karabakh (Garabagh) region, where the Russian peacekeeping forces are temporarily deployed.

In early September, Azerbaijan’s customs officials began collecting fees from Iranian cargo lorries to use the Azerbaijani section of the road between Armenia’s towns of Gafan and Gorus. On September 15, Azerbaijani border guards detained two Iranian drivers for illegally crossing into Azerbaijan from Armenia. The drivers were later handed over to Iran after Iran’s transportation authorities warned logistics companies against illegally entering Azerbaijan’s Karabakh region.

Amid these events, Tehran accused Baku of allowing Israeli forces on Azerbaijani soil and then conducted large-scale military drills close to its border with Azerbaijan. However, Azerbaijani President Ilham Aliyev described the allegations about the presence of the Israeli forces in the country’s territories as “baseless.”