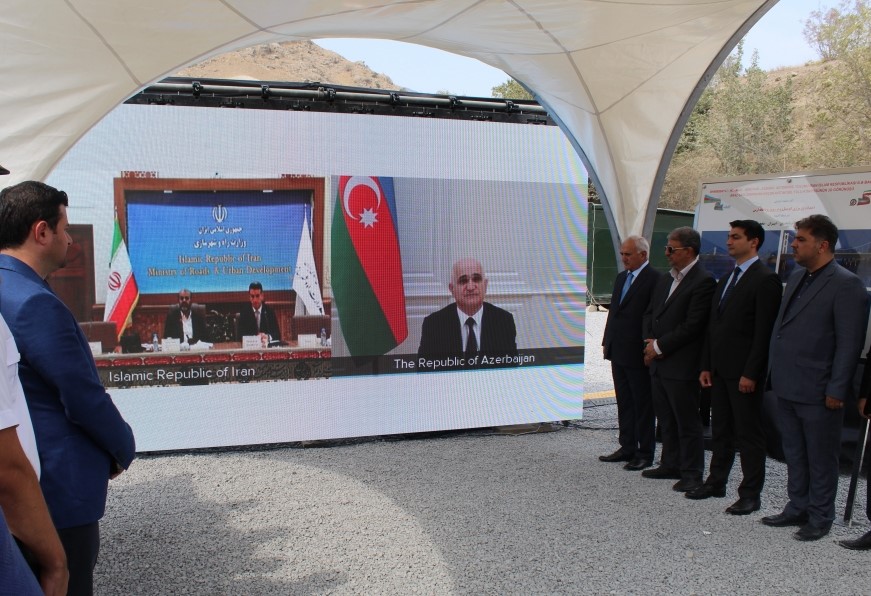 Azerbaijani Deputy Prime Minister Shahin Mustafayev and Iranian Minister of Roads and Urban Development Rostam Ghasemi watched a ceremony to launch the construction of the Aghband automobile bridge over the Araz River, via video conference on September 21, 2022. / Azertag

Azerbaijan and Iran have launched the construction of the Aghband automobile bridge over the Araz River, which will be built in Azerbaijan's East Zangazur economic region on the border between the two countries.

The bridge that will connect the Horadiz-Jabrayil-Zangilan-Aghband highway with the Iranian highway grid across the Araz River has already been designed. It will measure 216 meters in length and 24.5 meters in width and contain two lanes for cars and one lane for pedestrians in each direction. In addition, a checkpoint is planned to be built there to receive at least 1,000 cargo vehicles daily (500 at the entrance and 500 at the exit).

Officials from Azerbaijan and Iran expressed their confidence that the new bridge would serve to strengthen friendly relations between the two countries, further develop transportation routes, and increase the transit potential of the region.

In March, Azerbaijan and Iran signed an agreement to establish new transport and electricity supply links connecting mainland Azerbaijan to its exclave of Nakhchivan via Iran. According to the agreement, the two countries plan to launch a new railway, highway, communication, and energy supply lines connecting Azerbaijan’s East Zangazur economic region and the Nakhchivan Autonomous Republic through the territory of Iran bypassing Armenia. Four bridges will be built over the Araz River, including two motorways (with a pedestrian crossing) and two railway lines on them.

Besides the construction of highways and railway lines, the project provides for laying high voltage power lines from mainland Azerbaijan to Nakhchivan via Iran. This transit power transmission line will be connected to Khudafarin and Giz Galasi hydroelectric power plants via Jabrayil 330/110-kilovolt substation, the largest in the region.

After liberating its lands from Armenian occupation following a 44-day war in 2020, Azerbaijan regained control over a 132-km section of the Azerbaijan-Iran border. The re-establishment of control over the state border opened up new prospects for broader cooperation between the two countries.

Azerbaijani President Ilham Aliyev said back in February that Baku was planning to build a new power line along the "Zangazur corridor" - a prospective link between mainland Azerbaijan and its Nakhchivan exclave via Armenia. He said that Azerbaijan would use the new connection to supply electricity to Nakhchivan and export it to Türkiye and Iran.

About 2,050 Iranian companies are operating in Azerbaijan, with some of them to be involved in the restoration works in the Azerbaijani territories liberated from Armenian occupation in 2020.