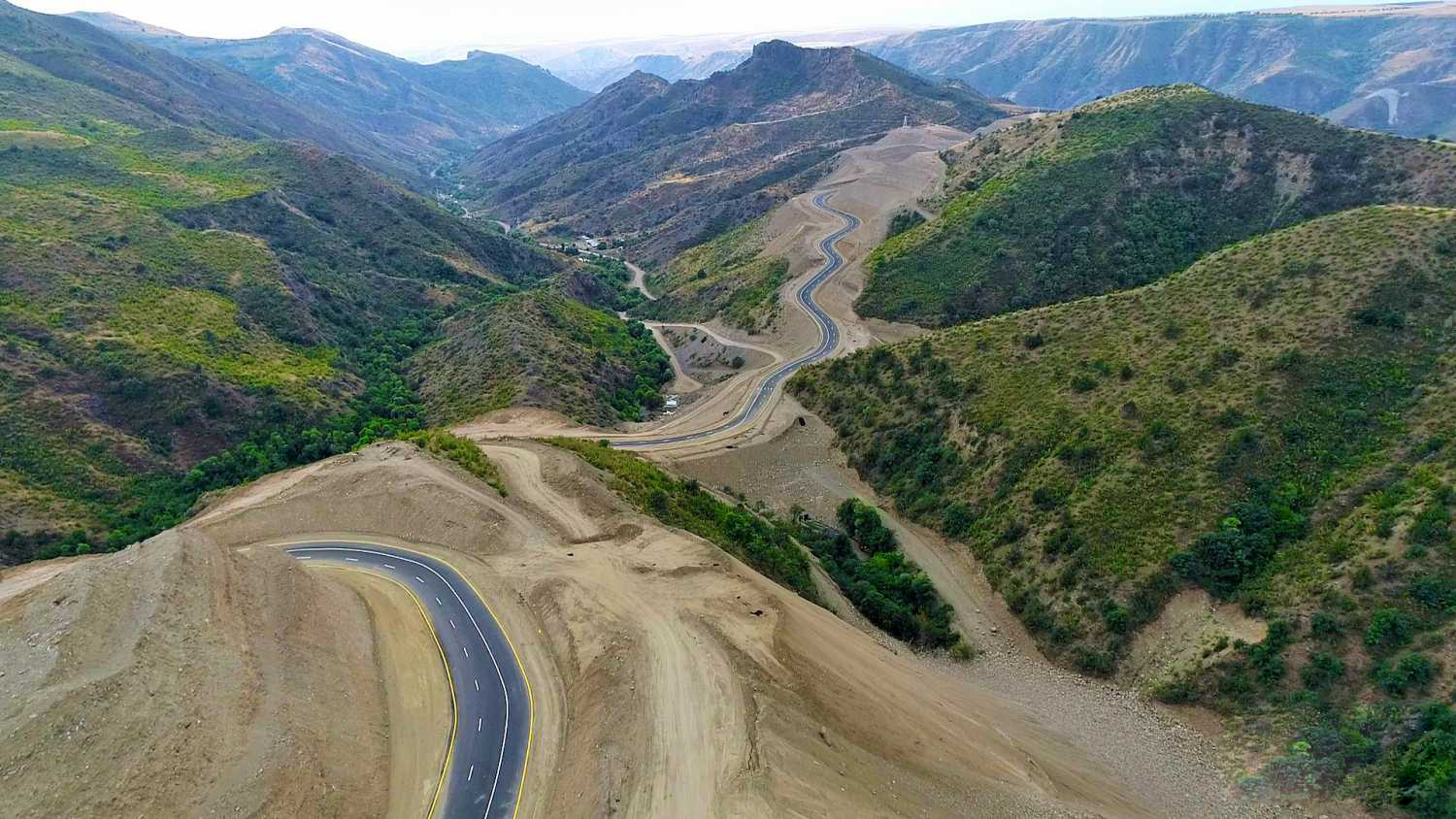 A view from the newly built highway in the East Zangazur region of Azerbaijan. The road bypasses the Lachin city to replace the Lachin corridor / State Agency of Azerbaijan Automobile Roads

Azerbaijan has completed a new high-quality highway in its Karabakh and East Zangazur economic regions.

The new road bypasses Azerbaijan's Lachin city and opens an all-new connection link between the Armenian-populated part of Azerbaijan's Karabakh region and Armenia.

According to the State Agency of Azerbaijan Automobile Roads, ground was broken on the new highway, measuring 32 kilometers in total length, with 10 kilometers passing through Armenia’s territory, in July 2021.

The width of the carriageway, including three-lane on the slopes and two-lane on other sections, varies from 7 to 10.5 meters, and the roadway as a whole measure 12-15 meters. A four-span road bridge with a length of 149.5 meters and a width of 13.5 meters was built at the end of the 22nd kilometer of the road, where it will connect with the Armenian section.

The road is said to be fully operational in the Azerbaijani territory by August 25.

Meanwhile, Armenia is also expected to launch the 10-kilometre portion of the highway within its territory.

The Minister of Territorial Administration and Infrastructure of Armenia Gnel Sanosyan said Yerevan plans to complete the road’s construction sometime by the spring of 2023.

"The construction has started, the equipment is working, the road is being built,” Sanosyan said. "We have divided it into three parts and are actively working on it.”

Armenia and Azerbaijan had been at odds for several decades over the latter’s Karabakh (Garabagh) region. Following the Soviet Union’s dissolution in 1991, Armenia launched a military campaign against Azerbaijan that ended with a ceasefire deal in 1994. As a result of the bloody war, Armenia occupied 20 percent of Azerbaijan’s internationally recognized territories. Over 30,000 Azerbaijanis were killed, and one million others were expelled from those lands in a brutal ethnic cleansing policy carried out by Armenia.

Lachin was occupied by the Armenian forces in 1992 leading to the forcible expulsion of ethnic Azerbaijanis living there.

On September 27, 2020, the decades-old conflict between the two countries took a violent turn after Armenia’s forces deployed in the occupied Azerbaijani lands shelled military positions and civilian settlements of Azerbaijan. During the counter-attack operations, Azerbaijani forces liberated over 300 settlements, including the cities of Jabrayil, Fuzuli, Zangilan, Gubadli, and Shusha, from a nearly 30-year-long illegal Armenian occupation. The war ended in a tripartite statement signed on November 10, 2020, by Armenia, Azerbaijan, and Russia. Under the statement, Armenia also returned the occupied Aghdam, Kalbajar, and Lachin districts to Azerbaijan.

However, the city of Lachin and two villages in the district remained along the Lachin corridor, which connects the Armenian-populated part of Azerbaijan's Karabakh region with Armenia and is currently monitored by the Russian peacekeepers.

The new road will serve as an alternative to the Lachin corridor. It will shift the connection between Armenia and the Azerbaijani territories partially inhabited by ethnic Armenians from the traditional corridor to the new route and the city of Lachin will be returned to the control of the Azerbaijani authorities.