Azerbaijan Expands Its Defense Industry To Include A New Gun 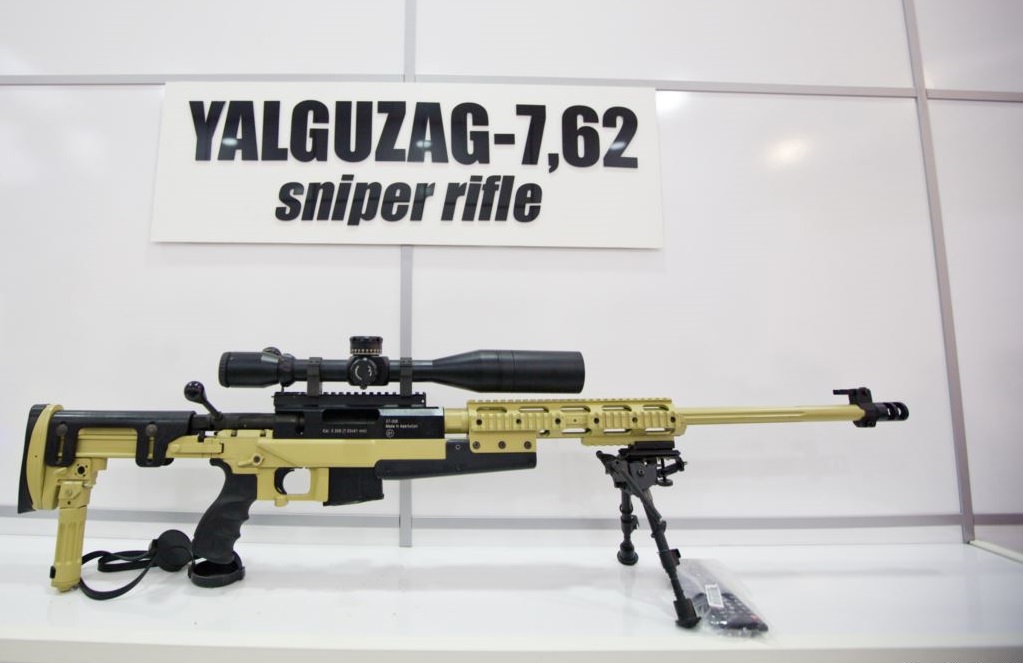 Yalguzag sniper rifle is a 7.62×51-mm a bolt-action sniper rifle developed in line with NATO standards. The rifle is used widely by the Armed Forces of Azerbaijan. Yalguzag translates as "Lone Wolf" in English

Azerbaijan’s defense industry is planning to add a new machine gun into the national arsenal sometime next year. High-level defense officials said on Monday that the pre-manufacturing preparations are complete and mass production may soon begin.

“The serial production of AZ 7.62 and EM-14 machine guns at the plants of the Ministry of Defense Industry of Azerbaijan will begin in 2019,” Deputy Defense Industry Minister Yahya Musayev wrote in an article published by Azerbaijan Newspaper on December 17.

“It is planned to begin mass production of 2A-42 (AT-30) brand automatic cannon, fire charges for the RPG 7V-2 grenade launcher, muzzles for machine guns and cannons, machine guns of various types and so on,” Musayev added. The deputy minister stated that the overall production of defense products in Azerbaijan include more than 1,200 military items. More than 80 percent of total production is for defensive and special purpose items.

Azerbaijan has produced in recent years the Yalguzag 7.62-mm caliber sniper rifle, a 7.62-mm caliber special-purpose machine gun, a 30-mm caliber automatic grenade launcher, a 40-mm caliber manual grenade launcher and the F-1 type grenade. Its defense industry also produces M-6 and M-12 type mines. Domestically produced weapons include the Istiglal and Mubariz-12.7 anti-materiel rifles, YIRTIJI-7.62, Yalguzag and Shimshak sniper rifles, UP-7.62 and HP-7.6v submachine guns, all of which are in line with NATO standards. The Gurza armored patrol car and Tufan mine-resistant ambush protected (MRAP) vehicle, the TR-107 and TRB-107 ground-to-ground missiles, new-generation Zarba attack UAV – known as the “kamikaze drone” of Azerbaijan – are considered to be of the best-in-class systems that are produced in Azerbaijan.

In Global Firepower’s latest military strength rankings, Azerbaijan came in at number 53 out of 136 countries, and in the top spot in the South Caucasus region. Regional neighbors Georgia and Armenia ranked 82 and 84, respectively.

Baku’s interest in upgrading weapons systems capabilities stems from the conflict with neighboring Armenia, which has waged a war for land since the early 1990s. Twenty percent of Azerbaijan’s internationally recognized territory, namely the Nagorno-Karabakh region and seven surrounding districts were occupied by Armenia during a full-scale war that lasted from 1991 until a ceasefire deal in 1994, and remains under occupation to this day. The bloody war claimed the lives of over 30,000 Azerbaijanis and expelled one million more from their homeland. Four UN Security Council resolutions passed between April and November 1993 condemning Armenia’s occupation and demanding a full withdrawal of its forces from the occupied Azerbaijani regions remain unfulfilled to this day. While the conflict is said to be ‘frozen’, war clouds are always looming as tensions between Baku and Yerevan run high.

In addition to supplying the needs of the national army, Musayev said a certain portion of the domestically made weapons – including various types of ammunition, the modern rifle and artillery weapons, armored vehicles, and special purpose patrol vehicles – are exported to foreign markets.

“Currently, Azerbaijan-made military products are exported to dozens of countries. Compared with 2017, the volume of exported goods increased by 9.2 percent,” Musayev wrote.

Azerbaijan has been exporting its domestic weapons to foreign markets since 2013, including NATO member states such as the United States and Turkey, as well as Russia, Belarus, South Korea, Saudi Arabia, the United Arab Emirates and Pakistan, according to AzVision.az. In 2016, the total volume of arms sales surpassed $120 million.

Rashad Suleymanov, a military expert in Baku, told AzVision.az that the purchase of Azerbaijani weapons by the U.S. military was first agreed during a Special Operation Forces Exhibition in Jordan, when a deal was reached to start shipments in 2013.

“Azerbaijan exports grenade launchers, mortars, mortar ammunition and some optical devices to the United States,” Suleymanov told AzVision.az. “A representative of one of the U.S. [defense] companies noted that Azerbaijan's RPG-7V-2 grenade launchers are superior to those produced by the Bulgarian company Arsenal for its quality.”