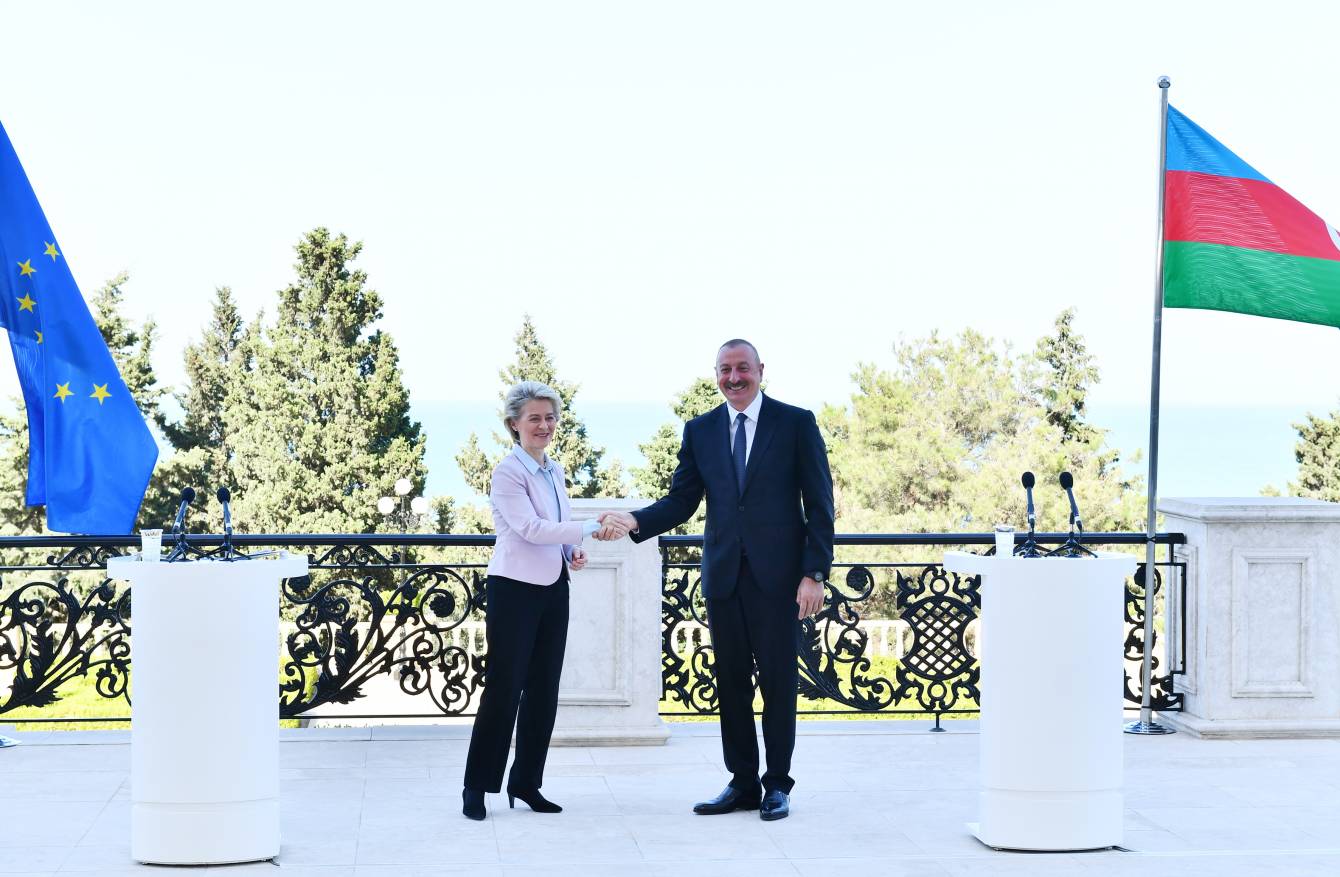 Azerbaijan and the European Union signed Monday a Memorandum of Understanding (MoU) on the strategic partnership in the field of energy.

The document was signed by Azerbaijan’s President Ilham Aliyev and European Commission President Ursula von der Leyen as part of the latter’s visit to Baku.

While addressing a joint press briefing, President Aliyev explained the newly signed document came as a result of the 15-year-long active energy cooperation between the sides. The document followed the previous strategic partnership agreement signed in 2006 and Joint Declaration on Southern Gas Corridor signed in 2011.

“We have a good history and good achievements. Energy projects initiated by Azerbaijan and supported by European Union and supported by our partners completely changed the energy map of Europe,” President Aliyev said after the signing ceremony.

“We started with oil production, and then gas production, and construction of oil pipeline which connected Caspian with Black Sea and the Mediterranean. Of course, the Southern Gas Corridor which is 3,500 km long integrated pipeline system which brings our gas to European Continent,” he added.

The Azerbaijani president further said that although the Southern Gas Corridor became fully operational less than two years ago, it has already brought benefits to both sides.

Azerbaijan has been supplying natural gas to Europe via the Trans Adriatic Pipeline (TAP) since December 31, 2020. TAP forms a part of the Southern Gas Corridor (SGC) mega pipeline designed and built for increasing and diversifying European energy supplies. TAP, the final segment of the corridor, starts at the Turkish-Greek border and runs along 773-kilometer onshore and 105-kilometer offshore routes traversing Greece and Albania toward its end destination in Italy.

The 3,500-kilometer-long mega pipeline strengthens European energy security, diversifying its energy supplies and boosting decarbonization efforts by providing an uninterrupted flow of Azerbaijani gas. The Southern Gas Corridor, defined as one of the world’s most complex and expensive pipelines built to date, is a unique energy route that carries natural gas from the Caspian Sea reserves directly to the European marketplace. The main source of natural gas for the SGC is Azerbaijan’s offshore Shah Deniz field, with an estimated 1.2 trillion cubic meters of proven reserves.

Meanwhile, Ursula von der Leyen said Monday that the main source of natural gas imports to Europe, namely supplies from Russia, were no more reliable already before Moscow’s invasion of Ukraine. According to her, the EU decided “to diversify away from Russia and to turn towards more reliable, trustworthy partners.”

“I’m glad to count Azerbaijan among them. You [Azerbaijan] are indeed a crucial energy partner for us and you have always been reliable,” she said at the joint press briefing with President Aliyev.

“The Memorandum of Understanding that we have just signed makes our energy partnership even stronger […] We will double the supply of gas from Azerbaijan to the European Union. Indeed, with this MoU, we commit to the expansion of the Southern Gas Corridor.”

The European Commission president further said that the SGC currently supplies over 8 bcm of gas to the European Union annually, while its capacity will be expanded to 20 bcm in a few years.

Earlier, officials in Azerbaijan revealed the country’s intention to put two new gas fields into operation in response to the growing demand for natural gas in global markets. The new reserves are expected to add a significant portion to the current volumes reaching European consumers.

Azerbaijani authorities have previously confirmed 2.6 trillion cubic meters of proven natural gas reserves, which they believe can supply foreign partners for the decades to come.