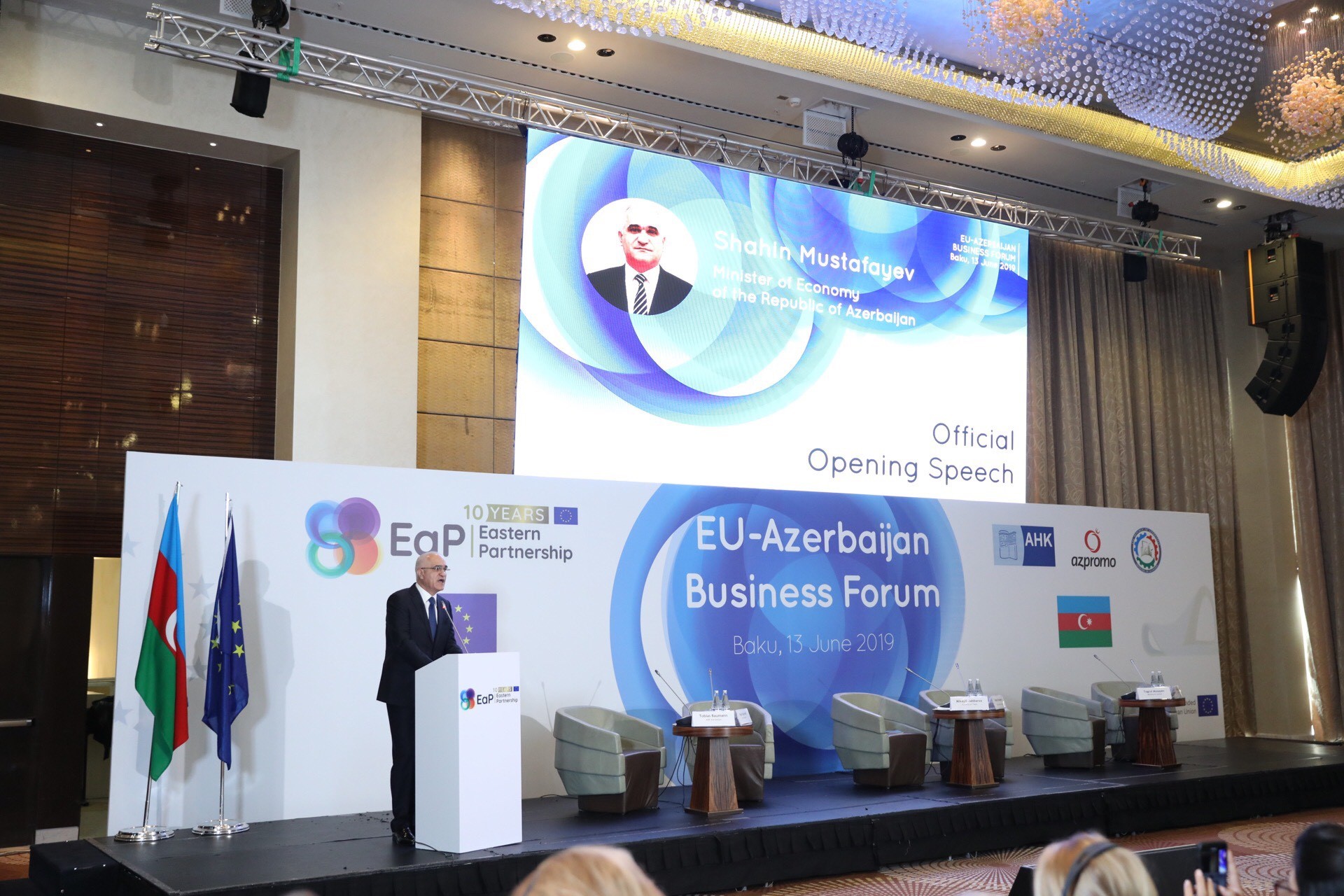 The 5th European Union-Azerbaijan Business Forum opened on Thursday in Baku, where more than 800 business leaders and government representatives gathered to hear speakers discuss issues of mutual concern between Europe and its ally in the South Caucasus region, namely Azerbaijan.

Mustafayev said the forum is now an ideal place for deliberating the prospects of economic cooperation between the EU and Azerbaijan and discuss trade and investment opportunities.

“The process of economic sustainability and its adaptation to the new conditions has continued since the previous Business Forum,” Mustafayev said in his remarks. “As a result of measures taken to maintain macroeconomic and financial stability, GDP and non-oil GDP [in Azerbaijan] increased respectively by 3 percent and 1.7 percent, non-oil sector grew by 16.1 percent, and inflation was 2.1 percent in the first quarter of 2019.”

Mustafayev said Azerbaijan is the number one trade partner of the EU in the South Caucasus, sharing 78 percent of the overall European trade in the region. Forty-two percent of Azerbaijan’s foreign trade is leveraged by EU countries, while EU investments in Azerbaijan account for $33 billion. Azerbaijan’s money placements in Europe stands at $15 billion, according to the minister.

Mutually beneficial cooperation with EU and intensive investments in the non-oil sector of oil-rich Azerbaijan led to a 35 percent increase in the non-oil exports, Mustafayev noted.

More than 20 years of cooperation with Azerbaijan has occurred since the EU-Azerbaijan Partnership and Cooperation Agreement went into force in 1999. The EU managed to become the first trading partner and biggest export and import market of Azerbaijan. It is also the largest foreign investor in both the oil and non-oil industries of what is the South Caucasus’s largest economy. Today some 1,600 European companies operate in Azerbaijan.

Diversification of external energy sources is one of the main concerns of Europe today. To this end, the EU has been searching for alternative resources and pipeline routes for importing gas, to not be over-reliant on Russia. The Southern Gas Corridor – a multi-billion dollar mega-gas pipeline project will bring Caspian Gas to Europe, as it crosses Azerbaijan, Georgia, Turkey, Greece, Albania and finally ends in Italy.

The EU’s overall inland gas demand stood at roughly 477 billion cubic meters (bcm) in 2017, according to data provided by Statista. Natural gas deliveries of Azerbaijan to Europe will expand by 10 bcm as soon as 2020, when the Trans-Adriatic Pipeline – the final segment of the three-phased Southern Gas Corridor – goes online. Azerbaijan’s Shah Deniz underwater gas field, beneath the Caspian Sea, will serve as the corridor’s single source – at least for the time being.

"If we look at the sectors of work covered by the EU Strategy [on Connecting Europe and Asia], we can see that EU and Azerbaijan have been working on the different sectors of connectivity – transport, energy, digital, and people to people – and should continue to do so in a comprehensive way,” the EU-Commissioner for European Neighborhood and Enlargement Negotiations Johannes Hahn said in his speech.