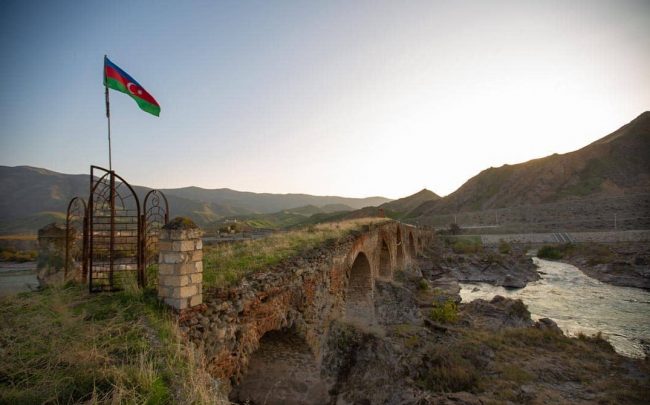 Millions of Azerbaijanis around the world celebrate the 102nd anniversary of the tricolor Azerbaijani flag, a state symbol of the country and legacy of the first democratic republic in the Muslim and Turkic world.

On November 9, 1918, following the collapse of the Russian empire and shortly after the formation of the Azerbaijan Democratic Republic - the predecessor of the modern-day Republic of Azerbaijan, the central government ordered to change an earlier version of the flag, which had a white crescent and a white eight-pointed star on a red background. The design of the flag was changed for three horizontal bands in equal size, of blue, red and green colors, with a white crescent and an eight-pointed star in the center. The decision was ratified unanimously on November 9, 1918 and paved the way for the adoption of an all-new tricolor flag of the newborn democratic republic.

The independent Azerbaijan Democratic Republic existed for 23 months before it was occupied by the Bolsheviks on April 28, 1920 and later incorporated into the Soviet Union. During the Soviet rule, the Azerbaijan Soviet Socialist Republic adopted eight different flags with first in 1921 and last in 1952. The eighth and final flag depicted a horizontal bottom blue band and a red upper band. A converged image of a hammer and sickle, as well as a five-point star, which were the official symbols of the Soviet Union, was added to the left upper corner.

The fall of the red Soviet flag took place in 1991 when Azerbaijan regained its sovereignty and brought back the national flag, nicknamed “Üçrəngli Bayraq” (the tricolor flag).

In 2009, President Aliyev signed a decree making the ninth of November a public holiday, called State Flag Day, to commemorate the country’s history and pay respects to a flag that withstood the tests of time.

The uppermost band of blue on the flag symbolizes the Turkic origin of the Azerbaijani nation. The middle band of red is symbolic of modern society, democracy and progress. The green band represents Azerbaijan’s connection to Islam, the predominant religion in a country of 10 million.

Some historians and researchers are divided over the reasons for why eight-pointed star and crescent were put on the flag of Azerbaijan.

While the crescent and star are acknowledged as the signs of Islam, Fatali Khan Khoyski, the first prime minister of the Azerbaijan Democratic Republic, wrote that eight points of the star testify to the eight letters in the word “Azerbaijan” as written in Arabic. Others claim the star is also a symbol of Turkic ideology, which together with the crescent creates a complete Turkic identification of the Azerbaijani nation. Eight points symbolize the eight branches of Turkic peoples.

Historically, each of eight points of the star has its own meaning, which is explained in eight different values: Turkism, Islamism, modernism, statehood, democracy, equality, Azerbaijanism and culture. The star was widely used in the Azerbaijani architectural style.

Specifications for the tricolor are enshrined in Clause 23 of the country’s constitution and is considered one of the state’s symbols, alongside the national anthem and the national emblem.

This year's celebrations of the State Flag Day follow the liberation of the city of Shusha in the Nagorno-Karabakh region, which is an internationally recognized territory of Azerbaijan but occupied by Armenia. On November 8, Azerbaijani armed forces liberated the strategic city of Shusha which was occupied by Armenia's forces on May 8, 1992. In addition, President of Azerbaijan Ilham Aliyev announced on November 9 the liberation of more than 70 other settlements and strategic heights from Armenia's occupation.

A new round of clashes between the Armenian and Azerbaijani forces broke out on September 27 when Armenia's troops deployed in the occupied Azerbaijani lands began shelling heavily the military positions and civilian settlements of Azerbaijan. The move prompted immediate counter-attack measures by the Azerbaijani army to push back Armenia's offensive. Since the start of hostilities to date, Azerbaijani army has liberated the occupied cities of Jabrayil, Fuzuli, Zangilan, Gubadli, and Shusha, as well as around 300 villages, settlements and strategic heights in the districts of Fuzuli, Jabrayil, Zangilan, Gubadli, Tartar, Kalbajar, Khojavend, Khojaly, Shusha and Lachin.