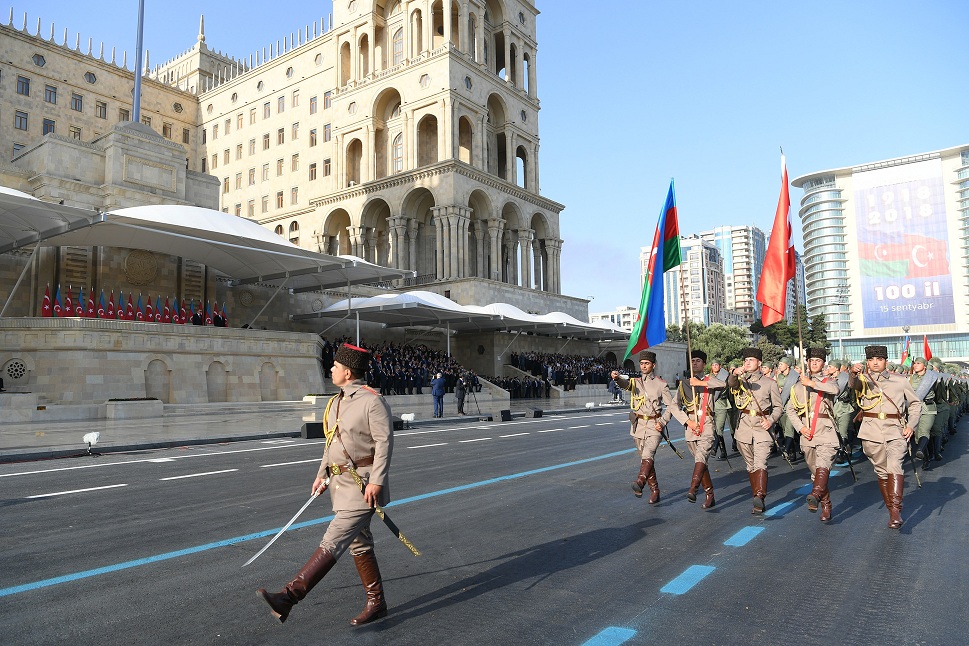 A squad symbolizing the Islamic Army of the Caucasus marches as part of the solemn military parade at the Freedom Square in Baku, September 15, 2018 / President.Az

Officials and residents in Azerbaijan’s capital city attended a joint military parade in Freedom Square on Saturday, where thousands of service members marched to celebrate the 100th anniversary of Baku’s liberation from Bolshevik and Dashnak forces on September 15, 1918.

“One hundred years ago, Baku was freed from invaders as a result of the joint operation of the Islamic Army of Caucasus of Nuru Pasha and the Azerbaijani National Army.”

Towards the end of the World War I, in August and September of 1918, Baku witnessed a bloody war between the Ottoman–Azerbaijani coalition forces, led by Nuri Pasha, and the Bolshevik and Dashnak soldiers, dispatched by Baku’s Soviet rulers. The battle ultimately decided the fate of what is an ancient Azerbaijani city and the existence of the newly-created Azerbaijan Democratic Republic (ADR), formed after the collapse of the Russian empire and established on May 28, 1918.

Grigory Korganov, People's Commissar of Military and Naval Affairs of the Baku Soviet – the executive power within Baku – had ordered the Soviet Red Army to begin a full-scale invasion of Ganja, a city deep in the South Caucasus and in the western part of Azerbaijan, on June 6, 1918. At the time, Ganja was the capital of ADR. Against the risk of losing its newly gained independence and given its insufficient military power, the ADR government asked the Ottoman Empire for a military support.

“In the fierce battles that lasted more than a day, our ancestors showed a true heroism and courage. I should note that two days after this historic victory, the Azerbaijani government [was] moved from Ganja to Baku and Baku was declared the capital of Azerbaijan,” President Aliyev said before the crowds on Saturday. “Our ancient city, the ancient city of Azerbaijani people, has been returned to its true owner.”

Enver Pasha, the Ottoman Empire’s war minister, had ordered the Islamic Army of the Caucasus – an elite unit of approximately 12,000 to 14,000 troops and who fought under the command of Nuru Pasha – to help the ADR government in its defiance against a Bolshevik invasion.

By July of 1918, Ottoman soldiers had defeated Red Army forces near Goychay city, in central Azerbaijan, stopping their march towards Ganja. From Goychay, Nuru Pasha led his forces to Baku, where he maneuvered a pivotal victory over British, Armenian and Bolshevik forces that were under the command of British Major General Lionel Dunsterville.

The Islamic Army of the Caucasus had incorporated between 6,000 and 8,000 volunteer Turkic-Muslim fighters in Azerbaijan to join its ranks before starting the final attack on Baku from the city’s northern and western gates, around 1:00 a.m. on September 14. Following hours of fierce battles across the city, Dunsterville decided to withdraw amidst weakening defensive positions for his troops.

Nuru Pasha liberated Baku completely by the next day, September 15, and sent a telegraph to Enver Pasha announcing the liberation of Baku. Over 1,000 Ottoman soldiers are estimated to have died as a result of them defending their Turkic kin in the South Caucasus.

“The operations carried out by the Islamic Army of the Caucasus and the Azerbaijani Army in 1918 set ground for today's independence, ensuring the territorial integrity of Azerbaijan,” Erdogan said in his remarks on Saturday.

According to Nasiman Yagublu, a Professor of Historical Sciences at Baku State University, even Mahammad Amin Rasulzade, one of the founders of the ADR, recognized that the independence of Azerbaijan would have not been possible without Turkish support.

On September 17, 1918, the ADR government moved the capital from Ganja to the Caspian Sea coastal city of Baku. The move is said to have contributed to the restoration of the territorial integrity of Azerbaijan and helped provide sustainable security for the population living in and around Baku.