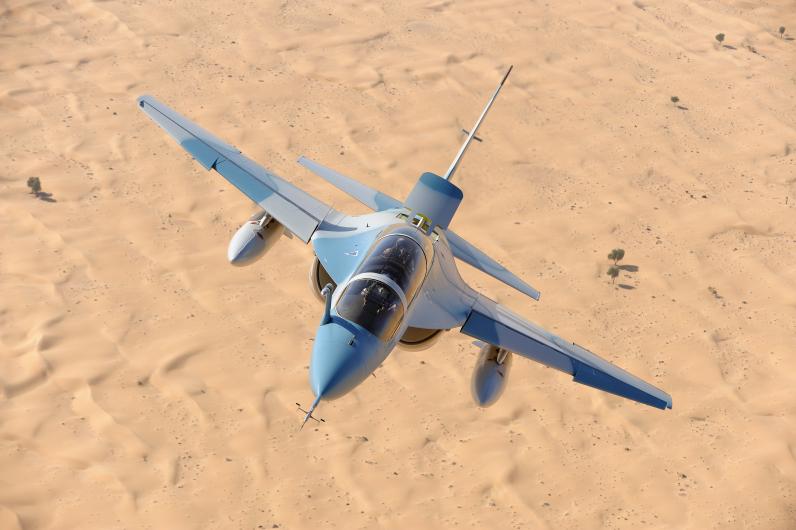 Under the deal, Leonardo’s M-346 cutting-edge trainer jets are being purchased by Azerbaijan’s defense ministry. / Leonardo

Azerbaijani President Ilham Aliyev has made a prolific visit to Italy this week, reaching more than a dozen agreements, including in the defense sector.

A contract with Italy’s airplane manufacturer and defense corporation Leonardo was just one of the 17 agreements signed by representatives from Baku and Rome. Under the deal, Leonardo’s M-346 cutting-edge trainer jets are being purchased by Azerbaijan’s defense ministry.

“It will be a very big deal to be implemented by Leonardo,” President Aliyev said, referring to a memorandum of understanding signed with the Italian defense giant, according to the president’s official website. “This will be the opening of a new page in our collaboration, which is a very promising project. Because we are at the stage of modernizing our defense infrastructure.”

The M-346, designed for training pilots, is considered to be on par with next-generation combat aircraft such as the Eurofighter Typhoon and the F-35, which is designed by the American defense giant Lockheed Martin. Leonardo’s version forms part of the air forces of Italy, Singapore, Israel and Poland. Azerbaijan is the first country in the Caspian and South Caucasus region to purchase the model.

Azerbaijan already has the largest trainer jet fleet in the South Caucasus region, comprised also of Armenia and Georgia, with 29 aircraft, according to Global Firepower. Azerbaijan ranks 64 among 138 countries and is considered to be the strongest military in South Caucasus – a significant point, considering Azerbaijan having 20 percent of its internationally recognized territory under Armenia's occupation for more than a quarter century.

Azerbaijan’s air force has a total of 147 aircraft, including fighter, attack, transport and trainer jets, as well as civil and attack helicopters.

Cooperation between Baku and Leonardo began in 2012, at which time the company was branded as Finmeccanica. Then Augusta Westland, a wholly-owned subsidiary of the company, secured a € 115 million ($125 million) deal with Azerbaijan Airlines (AZAL) to supply 10 helicopters for offshore transportation, emergency medical services, search and rescue, and VIP transportation services.

Leonardo is also involved in Azerbaijan’s energy sector. In 2017, it reached an agreement with the State Oil Company of the Azerbaijan Republic (SOCAR) that has the company providing physical and cybersecurity services to protect the Southern Gas Corridor mega-natural gas pipeline that will begin supplying 10 billion cubic meters of Caspian gas to Europe by the end of this year.