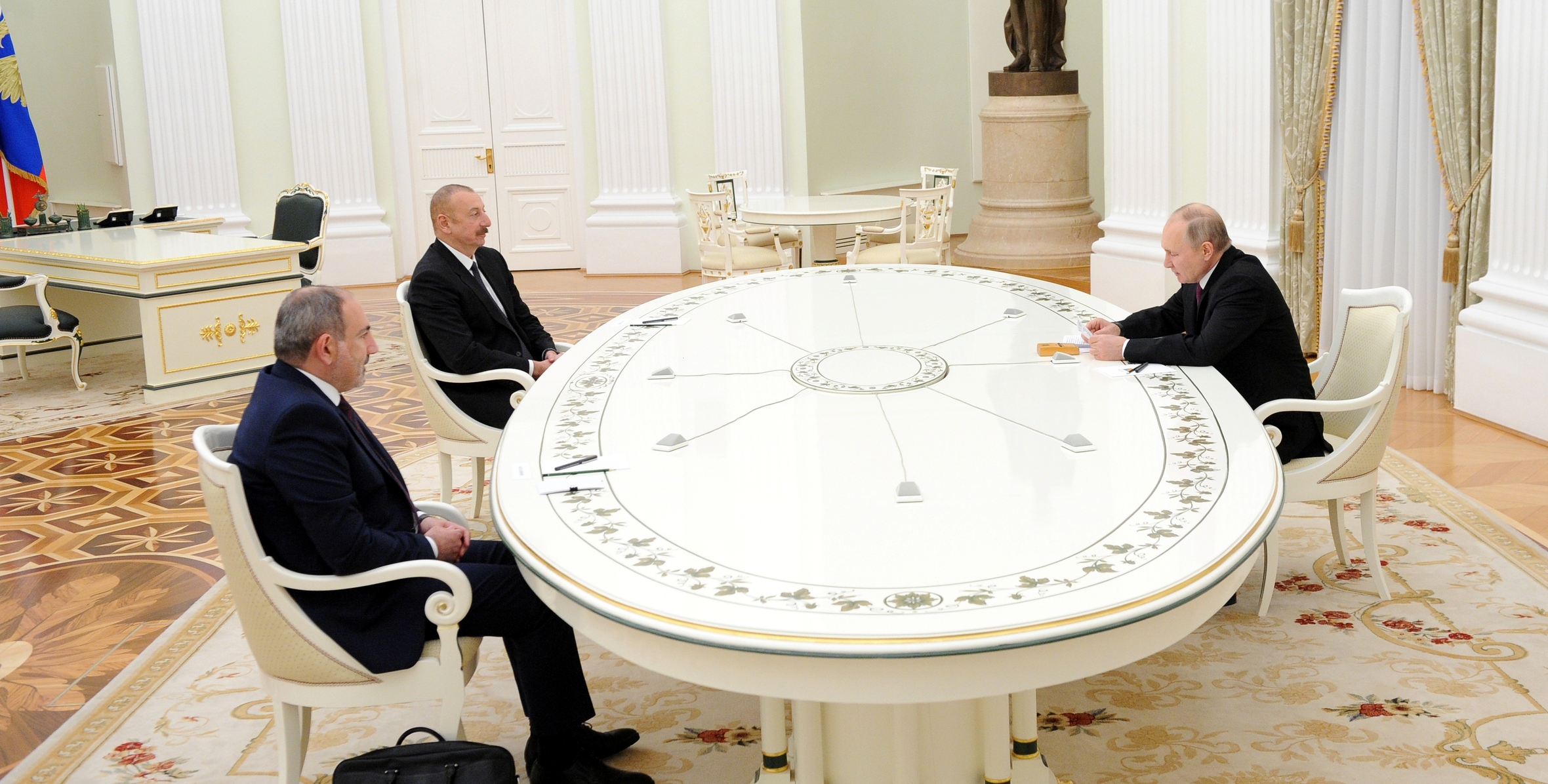 The presidents of Azerbaijan and Russia, along with the prime minister of Armenia, met on Monday in Moscow to discuss priorities related to the post-war issues in the region. The meeting concluded with the signing of a next tripartite statement concerning the unlocking of the regional transport communications.

The statement addresses the creation of a trilateral working group co-led by the deputy prime ministers of Azerbaijan, Armenia and Russia. The working group is expected to hold its first meeting by January 30, 2021, a necessary step for forming a list of the main areas of work outlined in paragraph 9 of the tripartite ceasefire statement signed on November 9. Paragraph 9 of the document calls for the restoration of all economic and transport links in the region. It also tasks Armenia to guarantee the safety of transport links between the western regions of Azerbaijan and the country's southwestern exclave of Nakhchivan Autonomous Republic in order to organize an unimpeded movement of citizens, vehicles and goods in both directions.

Appointed co-chairs will be tasked with creating subgroups of field-related experts. The subgroups should within a month after the meeting of the working group present a list of projects, as well as the necessary resources and activities for their implementation.

By March 1, 2021, the working group should submit for approval a list and a schedule for the implementation of measures involving the restoration and construction of new transport infrastructure facilities necessary for the organization, implementation and security of international traffic. The traffic includes both the transportation realized through the territories of Azerbaijan and Armenia, as well as transportation carried out by these two countries, which require crossing the territories of the two neighboring countries.

"I am confident that the implementation of these agreements will benefit both the peoples of Armenia and Azerbaijan, will undoubtedly benefit the region as a whole, and hence the interests of the Russian Federation," Russia's President Vladimir Putin said in a joint press briefing after the document's signing, according to Ria Novosti.

President Ilham Aliyev of Azerbaijan said the statement is a testament to the intentions of the sides, including the restoration of the transport communications and this area can bring great dynamic to the development of the region and strengthen security.

"The opening of transport communications serves the interests of the peoples of Azerbaijan, Armenia, Russia and our neighbors. I am confident that neighboring countries would also actively engage in the establishment of a diversified network of transportation corridors and arteries in our region. We must continue to identify areas of activity that are effective and result-oriented in the short term," President Aliyev said.

Azerbaijan seeks to reconnect the country’s exclave – the Nakhchivan Autonomous Republic – with its mainland after the successful counter-offensive operations in the country’s Karabakh region. Surrounded by Armenia, Iran, and Turkey, currently, Nakhchivan is not connected via direct overland routes with mainland Azerbaijan. Nakhchivan became an exclave separated from the Azerbaijani mainland after the Soviet occupation of the South Caucasus region in 1920. Following the region’s incorporation, Soviet rulers inked a decision to transfer some of Azerbaijan's territories, including its historic region of Zangezur, which borders Nakhchivan, to the newly-created Armenian state.

Armenia’s military aggression against Azerbaijan in the early 1990s and occupation of the Nagorno-Karabakh (Daghlig Garabagh) region, which is an internationally recognized part of Azerbaijan, aggravated Nakhchivan’s isolation. All kinds of energy, electricity, and transport connections, including highways and railways to and from Nakhchivan was closed by Armenia along with the occupation of the Nagorno-Karabakh region and seven surrounding districts of Azerbaijan in a 1991-1994 war. Currently, overland and air connection with Nakhchivan is available either via Iran in the south or through Turkey in the west.

Meanwhile, Armenia's Prime Minister Nikol Pashinyan said although the region can benefit from the new agreement, there are still certain issues to be resolved, including the so-called status issue of the Nagorno-Karabakh region.

"The implementation of the agreements in this statement can simply change the economic landscape and image of our region. Economic innovations can lead to more reliable security guarantees, and we are, of course, ready to work constructively in this direction. But as I said, unfortunately, not all issues can be resolved in one meeting. I do hope that we will go further," Pashinyan said in the joint press briefing.

The meeting in Moscow is the first trilateral assembly of the leaders after the six-week-long war between Armenia and Azerbaijan in the latter's Karabakh region. The hostilities that started by Armenia's forces deployed in the occupied Azerbaijani lands on September 27 and wrapped up in a tripartite ceasefire statement mediated by Russia on November 9 changed the decades-old circumstances in the region. Azerbaijani army liberated over 300 settlements, including 5 cities in its Karabakh region, from nearly three-decades-long illegal occupation of Armenia. Under the ceasefire agreement, Armenia returned three more occupied districts to Azerbaijan. Currently, a Russian contingent of 1,960 peacekeepers oversees the peace and adherence to the ceasefire agreement in Azerbaijan's Nagorno-Karabakh region and the 5km-wide Lachin corridor. Azerbaijan's President Ilham Aliyev said at the height of the war on October 9 that successful counter-offensive operations of the Azerbaijani army eliminated the decades-old status quo and the line of contact in the region.

The so-called status issue of Nagorno-Karabakh mentioned by Armenia's PM Pashinyan refers to the recognition of the illegal separatist regime deployed in the region since the early 1990s when a war ensued there. The bloody war until a ceasefire in 1994 saw Armenia occupying 20 percent of Azerbaijan’s internationally recognized territories – the Nagorno-Karabakh (Daghlig Garabagh) region and seven surrounding districts. Over 30,000 ethnic Azerbaijanis were killed and one million were expelled from those lands in a brutal ethnic cleansing policy conducted by Armenia. Today, all of the seven surrounding districts, as well as the strategic Shusha city and part of Khojaly and Khojavend districts in the Nagorno-Karabakh region are back under Azerbaijan's control. The government of Azerbaijan rejects any status for the separatists remaining in the parts of the Nagorno-Karabakh region monitored by the Russian peacekeepers. Baku says that ethnic Armenians living there are the citizens of Azerbaijan.