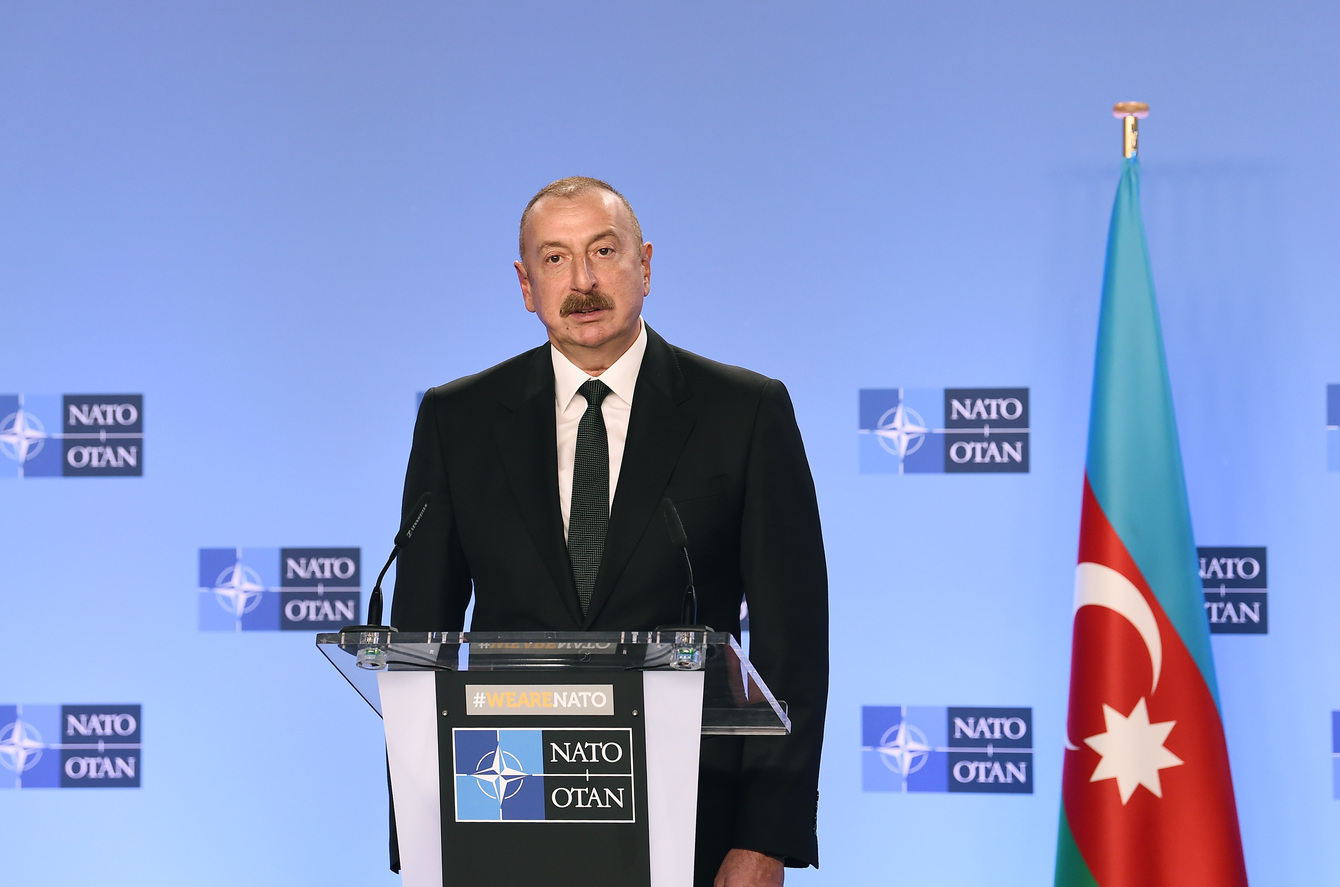 President Ilham Aliyev said Azerbaijan and Armenia have come to a consensus on building transport communications through Armenia’s territory that would restore direct connection between Azerbaijan’s Nakhchivan Autonomous Republic and the mainland of the country.

President Aliyev’s remarks came during a joint press conference with NATO Secretary-General Jens Stoltenberg at the NATO headquarters in Brussels, Belgium on Tuesday.

“We have achieved an agreement on building the railroad connection from Azerbaijan through Armenia to the Nakhchivan Autonomous Republic and also an agreement on the construction of the highway. But the exact route of the highway has not yet been identified; it’s a matter of future discussions,” the Azerbaijani president said referring to the Zangazur Corridor, according to President.Az.

President Aliyev explained that the corridor’s launch would not only benefit Azerbaijan, but Armenia, as well. It provides railway access to Iran, a connection Yerevan and Tehran had been planning to build, but could not manage due to large expenses. The rail link would also connect Armenia with Russia via Azerbaijan’s territory. Connections with Iran and Russia could help Yerevan improve its economic situation by enabling access to the Iranian market and the markets in the countries of the Eurasian Economic Union, of which Armenia is a member.

“So, it really will create a special positive atmosphere in the region and a win-win situation for everyone. Therefore, I think that the evaluation of these opportunities is very important. The proper evaluation is important in order to plan our peaceful future,” President Aliyev said, adding Baku has repeatedly voiced its readiness to work on a peace agreement with Yerevan.

The agreement on the Zangazur Corridor comes after a decades-old conflict between Armenia and Azerbaijan over the latter’s Karabakh (Garabagh) region, which started with Armenia’s full-blown military aggression against Azerbaijan following the Soviet Union’s dissolution in 1991.

The bloody war lasted until a ceasefire in 1994 and saw Armenia occupying 20 percent of Azerbaijan’s internationally recognized territories. Over 30,000 Azerbaijanis were killed, and one million were expelled from those lands in a brutal ethnic cleansing policy conducted by Armenia. As a result of the war between Armenia and Azerbaijan in the early 1990s, Nakhchivan became fully isolated from the Azerbaijani mainland after Armenia closed energy, electricity, and transport connections, including highways and railways to and from the region.

On September 27, 2020, the Armenia-Azerbaijan conflict took a violent turn when Armenia’s forces deployed in the occupied Azerbaijani lands shelled military positions and civilian settlements of Azerbaijan. During the counter-attack operations that lasted 44 days, Azerbaijani forces liberated over 300 settlements, including the cities of Jabrayil, Fuzuli, Zangilan, Gubadli, and Shusha, from nearly 30-year-long illegal Armenian occupation. The war ended in a tripartite statement signed on November 10 by Armenia, Azerbaijan, and Russia. Under the statement, Armenia also returned the occupied Aghdam, Kalbajar, and Lachin districts to Azerbaijan.

The liberation of Azerbaijan’s lands has created ample opportunities to reshape the regional economy, trade and transportation. The tripartite statement called for the implementation of various issues of regional significance, including the restoration of all economic and transport links.

Government officials in Azerbaijan are convinced that such regional transportation projects, including the Zangazur Corridor, could foster peace and cooperation and bring new opportunities, and help all nations in the region live a prosperous and peaceful life. According to some analysts, the corridor would add an all-new artery to the East-West and North-South intercontinental transport corridors. The launch of the multi-modal Zangazur Corridor is said to benefit all regional countries and contribute to the Eurasian trade and transport communications that incorporate the regional economies with a nominal GDP of $1.1 trillion.

President Aliyev believes that the legal regime of the Zangazur Corridor should be exactly the same as Lachin Corridor because Trilateral Statement clearly says that Armenia should provide the same unimpeded access and security for connections between Azerbaijan's mainland and exclave of Nakhchivan.

“If Armenia would insist on using their custom facilities to control the cargos and people, then we will insist on the same on Lachin Corridor. This is logical, and the decision is to be made by Armenia. We are ready for both options,” President Aliyev explained.