As Tensions Mount, Russia Warns Against Foreign Meddling in Belarus 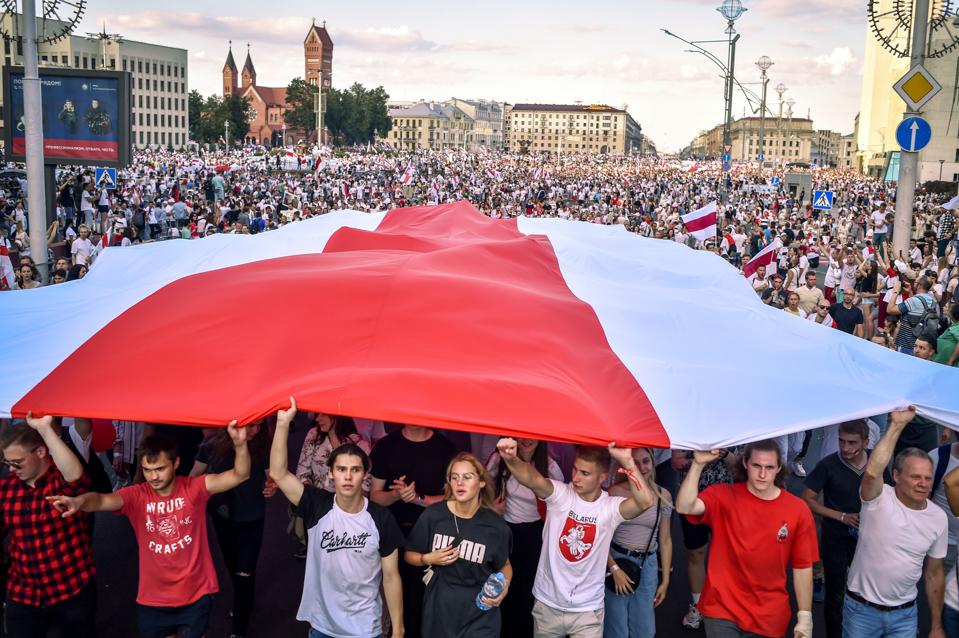 Over the last ten days, hundreds of thousands of Belarusians have been protesting against the results of the August 9 presidential election demanding Lukashenko's resignation.

The largest opposition protests against incumbent President Alexander Lukashenko in Belarus to date have raised alarm bells in Russia, which has offered the former Soviet republic help to steer it out of its political crisis.

High-ranking Russian officials have voiced their concern about the situation in the neighboring country and particularly over attempts by outside forces to meddle in and destabilize the country.

During the 30-minute call with European Council President Charles Michel ahead of an emergency European Union summit at which the bloc will offer solidarity to Belarusian protesters, Russian President Vladimir Putin warned against "outside interference" in Belarus, which he said would lead to "another escalation of the crisis."

"Ahead of the European Union summit, the current state of affairs in Belarus was discussed," the Kremlin’s press service said in a statement issued on Tuesday. "The Russian side expressed concern over attempts by a number of states to put pressure on the country’s leadership and destabilize the internal political situation."

"There was an expression of interest in preventing a confrontation scenario," the statement added.

On the same day, Russian Foreign Minister Sergei Lavrov had a telephone conversation with Germany’s Foreign Minister Heiko Maas, focusing on the deescalation of tensions in Belarus. Russia's foreign minister emphasized that any foreign interference in the domestic affairs of Belarus is unacceptable and drew the attention of Germany — which holds the presidency of the Council of the EU — to external attempts to destabilize the situation in the country with which Russia has brotherly relations.

At the same time, Russian Deputy Foreign Minister Sergey Ryabkov denounced attempts by external actors to put pressure on Lukashenko's government. He said such actions are an attempt to change the geopolitical landscape of Belarus.

Over the last ten days, hundreds of thousands of Belarusians have been protesting against the results of the August 9 presidential election demanding Lukashenko's resignation. The president, who has ruled Belarus since 1994, claimed a landslide win, but the opposition accuses him of rigging the vote to secure a sixth term in office. At least two people have died in the violence and thousands of others have been arrested.

The international community has widely condemned the election process and the subsequent police crackdown on demonstrators. During Wednesday’s video conference, EU leaders are expected to impose sanctions on Belarusian officials it deems responsible for election fraud and a crackdown on mass protests that followed the election, sending a message to Russia that it must not intervene in the former Soviet republic.

Meanwhile, Lukashenko accused NATO of a military buildup in Lithuania and Poland near western borders of Belarus — a claim the alliance has rejected — and called on Russia to intervene. In response, Russia expressed its readiness to offer military assistance, if necessary, to Belarus, which is part of a six-country military alliance — the Collective Security Treaty Organization (CSTO).

Created in 2002, the intergovernmental military alliance includes Russia, Belarus, Armenia, Kazakhstan, Kyrgyzstan and Tajikistan. The military bloc operates under a similar premise to that of NATO — an attack on one member state is considered an attack on all others and each is obliged to support their fellow members.