Armenia's Use of Iskander Missiles Against Azerbaijan Confirmed with New Evidences 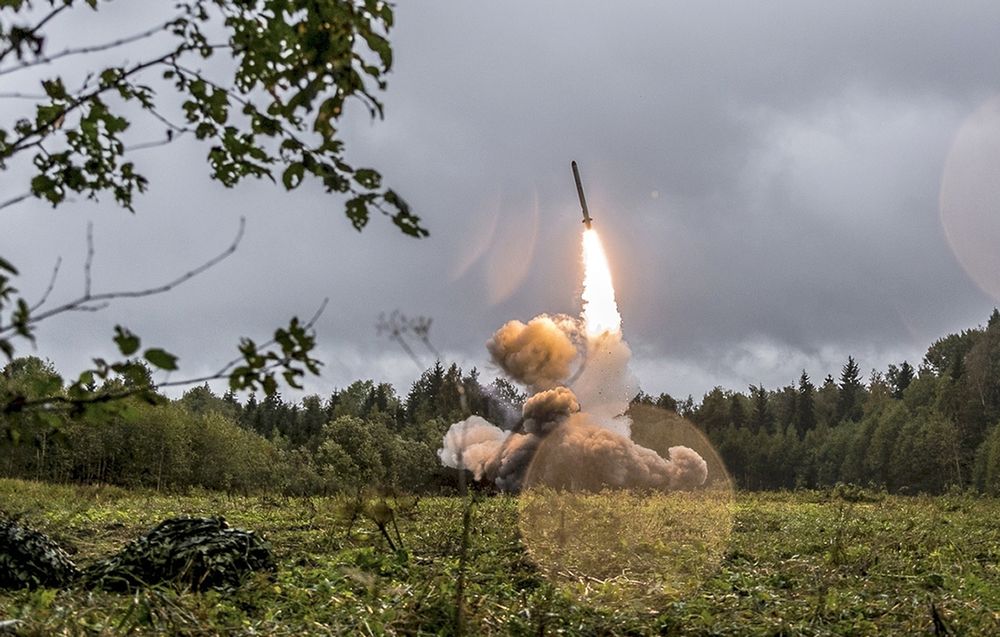 The Iskander missile system is produced in two variants: Iskander-M and Iskander-E. The M version is intended for use by the Russian military, while the E type is purposed for export. / Russian Defense Ministry Press Service/AP Photo

Armenia's use of Russian-made Iskander ballistic missiles during the 2020 war with Azerbaijan in the latter’s Karabakh region is once again in focus among regional and international media.

The national mine clearance agency of Azerbaijan found wreckages of two exploded rockets around the Azerbaijani city of Shusha in the Karabakh region as a result of the ongoing clearance operations. The debris, discovered on March 15, was confirmed to belong to Iskander missiles manufactured by Russia. The agency made an open-air demonstration of the rocket fragments in the capital Baku last week, which raised questions about the deployment of the lethal missile against Azerbaijan.

The Russian-made 9K720 Iskander, which is also known as SS-26 Stone, is a road-mobile short-range ballistic missile (SRBM) with a range of up to 500 kilometers. The system deploys both 9M723 ballistic and 9M728/29 cruise missiles. The Iskander supports different conventional warheads such as a cluster munitions warhead, a fuel-air explosive enhanced-blast warhead, a high explosive-fragmentation warhead, an earth penetrator for bunker-busting, and an electromagnetic pulse device for anti-radar missions, as well as nuclear warheads.

The Iskander missile system is produced in two variants: Iskander-M and Iskander-E. The M version is intended for use by the Russian military, while the E type is purposed for export. The Iskander-E system is reported to offer a reduced payload, less operational range than the most sophisticated version of Iskander-M. The export variant has a maximum range of some 280 kilometers, while the ballistic missile baseline – the Iskander-M travels up to 500 kilometers.

Russia dispatched Iskander missiles, which were believed to be Iskander-E, to Armenia in September 2016. Armenia has demonstrated the newly purchased weapons in a military parade dedicated to the 25th anniversary of the country's independence on September 21 of the same year.

Meanwhile, the mine clearance specialists of Azerbaijan identified the missile fragments to belong to an “M” type of the Iskander missile complex, which is not possessed by the Armenian forces. Russia reportedly supplied Armenia’s military with the “E” labeled variant of the missile produced for export purposes.

The debate around the use of Russian-made Iskander missile by Armenia for striking Azerbaijan first sparked in November when a former Armenian army chief, Movses Hakobyan, admitted to the use of the rocket during the war. In February, Armenia’s Prime Minister Nikol Pashinyan confirmed Hakobyan’s remarks by saying that the Armenian military fired the Russia-made missile in the last days of the war, but it did not explode or explode by 10 percent.

The most explicit description of Iskander’s launch on the Azerbaijani city of Shusha came from Armenia’s former chief of general staff Onik Gasparyan, who has thoroughly explained the process.

“The only time I was allowed to use the Iskander was in the city of Shusha. I used it. We took advantage of this and managed to bring several tanks into the city,” Gasparyan said, adding that Prime Minister Nikol Pashinyan has initially forbidden the rocket’s deployment for the fear of international backlash, Forbes reported.

David Tonoyan, who served as Armenia’s defense minister during the war, refused to comment on the reports about Iskander. Armenia’s incumbent chief of general staff, Artak Davtyan has also evaded the questions about Armenia’s use of the lethal missile. "No comment. I can't say anything, it is not subject to publication," he told journalists late last week, according to the media.

However, Russian president’s spokesperson Dmitriy Peskov denied the use of Iskander during the war in the Karabakh region. Peskov did not clarify the reports about how Armenia could fire “M” type of the Iskander missile that it does not have in its arsenal.

“As far as I understand, this is new information. I do not know whether they reported through the military, whether our military has any detailed information about this,” Peskov said.

A report released by the Turkish think-tank EDAM last week suggests that the Armenian military had systematically resorted to missile warfare during the war with Azerbaijan in the latter’s Karabakh region. The troops of Armenia also launched fatal ballistic missile attacks on Azerbaijan’s major population centers, such as the country’s second-largest city of Ganja.

“The SS-26 Iskander launch allegations have brought the missile debate to a whole new level,” the report reads.

The author of the EDAM report, Can Kasapoglu, believes that the Iskander missile system has never been a solely Armenian weapon system after Yerevan’s procurement in 2016. A Russo – Armenian joint control or Moscow’s oversight was critical in making decisions about the missile’s deployment.

The London-based news service, the Middle East Eye has earlier claimed that Russia encouraged Armenia to use Iskander missiles and provided material support for their launch amidst Azerbaijan’s speedy regaining of the territories lost in the early 1990s.

Armenia and Azerbaijan fought last autumn the second bloody war in the latter’s Karabakh region over the past 30 years. The decades-old tension between the two countries spiraled on September 27 last year with the bombardment of Azerbaijani positions by Armenia's forces deployed in the once occupied regions of Azerbaijan. The military of Azerbaijan took immediate counter-measures to push back the offensive.

The war ended in a tripartite ceasefire statement signed on November 10 by Armenia, Azerbaijan, and Russia. By this time, Azerbaijani forces liberated more than 300 settlements, including the cities of Jabrayil, Fuzuli, Zangilan, Gubadli, and Shusha, from nearly 30-year-long illegal Armenian occupation. Armenia also returned the occupied Aghdam, Kalbajar, and Lachin districts to Azerbaijan by December 1 as part of the obligations it took under the deal.