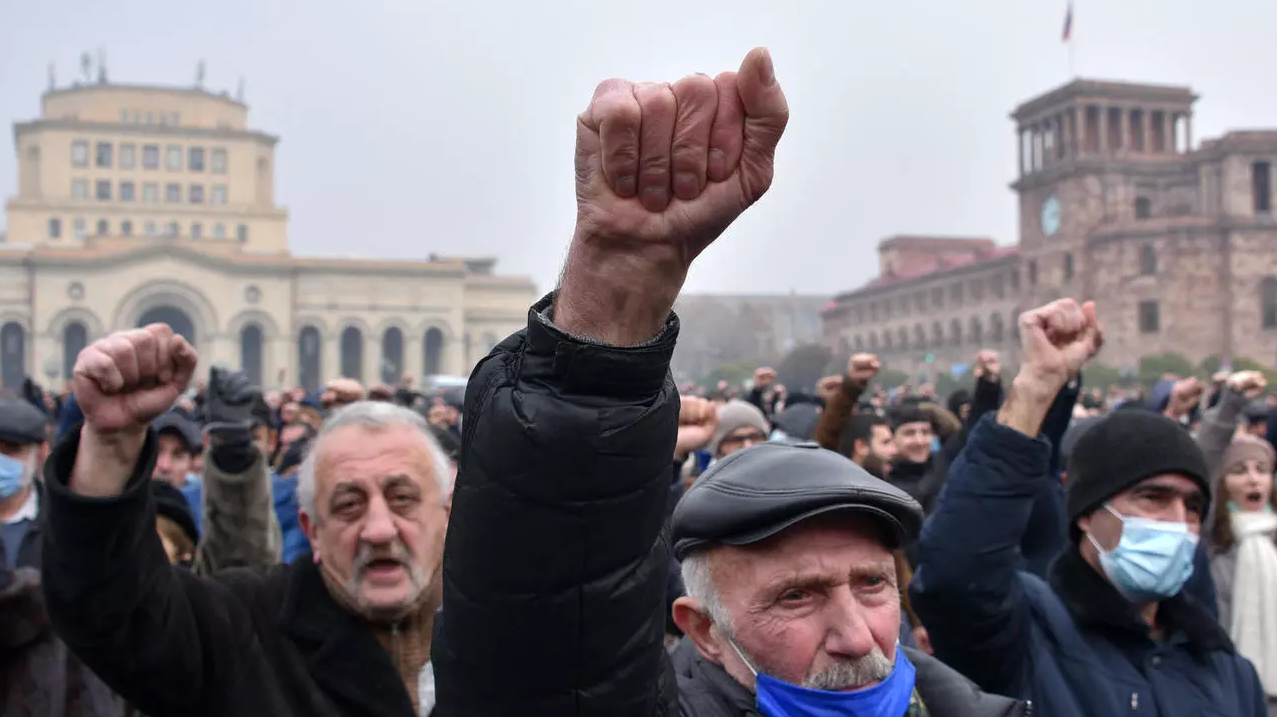 Armenia's capital city of Yerevan remains the epicenter of anti-government protests demanding Prime Minister Nikol Pashinyan to step down. The rally, which is now in its seventh week, broke out shortly after PM Pashinyan inked a tripartite ceasefire statement with Azerbaijan and Russia on November 9.

Thousands of protesters believe that PM Pashinyan betrayed Armenia by signing a pact which reaffirmed major territorial regains for Azerbaijan in the latter's Karabakh region. The ceasefire brokered by Russia ended six-week-long clashes in the Karabakh region between the forces of Armenia and Azerbaijan. After signing the document, Pashinyan described it as "unbelievably painful" for him and the people of Armenia.

Protesters demand the prime minister's resignation over the humiliating defeat in the war with Azerbaijan and the loss of control, though illegal, over the Nagorno-Karabakh region, an internationally recognized territory of Azerbaijan. Infuriated crowds of protesters and opposition supporters temporarily blockaded government buildings in the capital city, while blocked several major roads in the regions of the country. “Nikol, go away!” is the main slogan of the protests that have already been transformed into sit-ins in Yerevan's central square.

On Tuesday, the opposition parties of Armenia have called on PM Pashinyan and his ruling My Step coalition, which takes the majority of parliament seats, to step down. The Armenian Apostolic Church took the side of the protesting crowd as well. The head of the church, Catholicos of All Armenians, Karekin II, said the prime minister should resign in order to prevent turmoil in public life, as well as possible clashes and tragic outcomes. Earlier, the country's President Armen Sarkissian has also demanded PM Pashinyan's resignation for holding snap parliamentary elections and forming a new government amidst the deepening crisis in the country.

Armenia's prime minister, however, turned down the demands, defending the ceasefire agreement as "the best possible solution to the current situation." He has also blamed the previous authorities of Armenia for leaving a "burden of diplomatic failures over the last 20-25 years."

On December 25, PM Pashinyan has invited the political forces in Armenia to discuss holding snap parliamentary elections. There are two options for electing a new parliament, according to the Armenian premier: either the prime minister resigns, the parliament does not elect a prime minister twice, and early elections are held, or amendments are made to the Armenian Constitution, as a result of which the parliament receives the authority to dissolve and call early elections.

The Azerbaijani army has forced Armenia's military to withdraw from the territories it has been occupying for nearly three decades in a 44-day-long war. The Karabakh region of Azerbaijan staged the largest clashes from September 27 through November 9. Azerbaijani forces liberated more than 300 settlements, including five major cities and strategically important heights in the wake of the military operations.

On November 9, Russia mediated the signing of a decisive ceasefire between Armenia and Azerbaijan. The document confirmed Azerbaijan's territorial regains in the war, obliged Armenia to return three occupied districts to Azerbaijan, and mandated Russia to deploy peacekeeping forces in the Nagorno-Karabakh region of Azerbaijan. Currently, a Russian contingent of 1,960 peacekeepers oversees the peace and adherence to the ceasefire agreement in the region. As part of the agreement, Armenia returned the occupied parts of the Aghdam district to Azerbaijan on November 20, as well as the occupied districts of Kalbajar and Lachin on November 25 and December 1, respectively.

"Of all the players involved in this conflict, everyone benefits except Armenia,” Galia Ackerman, a Paris-based historian said, France 24 reports. “Russia regains its grip on Armenia; Turkey strengthens its links with Azerbaijan, and Azerbaijan is delighted because they have recovered territory that separatists had occupied for more than a quarter of a century."