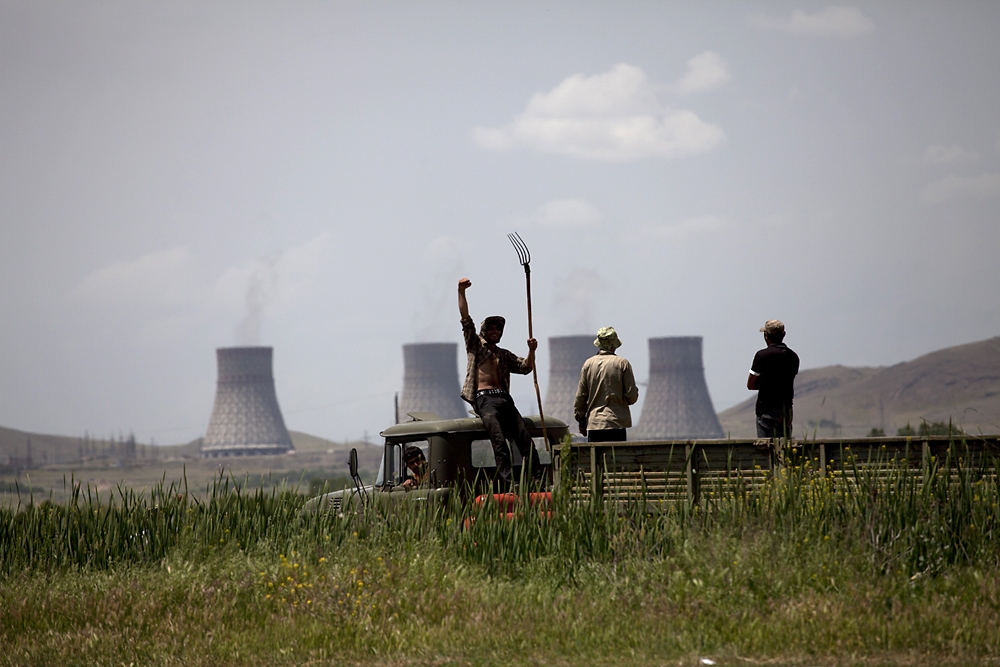 Armenia’s two-reactor Metsamor nuclear power plant was built on an earthquake-prone zone and was put into operation in 1976 without containment structures. / Courtesy

The Soviet-era Metsamor nuclear station in Armenia, described as one of the world’s most dangerous nuclear power plants (NPP), has once again come into the spotlight amid the 35th anniversary of the Chernobyl disaster, the worst nuclear accident to date.

The disaster near the Ukrainian city of Pripyat occurred on April 26, 1986, after a reactor in the Chernobyl NPP exploded and burned to throw clouds of radioactive material over the surrounding areas and many parts of Europe. The Soviet government evacuated 335,000 people from the accident zone and established a 19-mile “exclusion zone” around the reactor. Fifty million curies released by the disaster contaminated areas at a radius of 30 kilometers. The winds spread the radiation to the countries of northern and central Europe.

The Soviet government mobilized almost 600,000 people, called “liquidators,” to eliminate the consequences of the disaster. The average dose sustained by them was 12 roentgen equivalent man (rem), or 120 times the yearly dosage considered safe. The overall number of sufferers of the disaster was estimated at around 3.3 million. The effects of the accident remained widespread resulting in suicides, health problems, alcohol abuse, and apathy. Thyroid cancer has been reported in more than 6,000 children and adolescents after being exposed to radiation. The accident reportedly cost around $235 billion in damages.

Events in Chernobyl still set off alarm bells among many government officials, experts, and activists because of potential threats posed by NPPs of a similar kind, and particularly those built during the Soviet era and failed to undergo upgrades. Many experts believe that Armenia’s outdated nuclear power plant located near the city of Metsamor could be a new Chernobyl given its technical incapability and location on a highly sensitive seismic zone.

Armenia’s two-reactor Metsamor NPP is a one-of-a-kind facility in the South Caucasus and is located about 36 kilometers (22 miles) from the capital of Yerevan. The plant was built on an earthquake-prone zone and was put into operation in 1976 without containment structures. It is one of five of the last first-generation water-moderated Soviet-era reactors without a containment vessel, which is a requirement of all modern reactors. While the fuel for NPPs is shipped by sea or rail to mitigate the possible impact of potential accidents, the shipment for the Metsamor reactor is carried out by air from Russia.

In 1988, a 6.8 magnitude earthquake hit the nearby Spitak region, about 70 km (45 miles) north of the plant, leading to the deaths of thousands of people and the closure of the facility. But by 1995, the plant’s second reactor was back in operation. In 2019, the plant generated 27.8 percent of total electricity produced in Armenia.

As far back as 1995, observers dubbed it a “reckless gamble” with Armenia’s future and the lives of millions of people living in the surrounding countries. At the time, the Nuclear Energy Institute in Washington, D.C. said in a report that Metsamor is not in line with Western-style safety standards, comparing it to Ukraine’s collapsed Chernobyl reactor. That plant, too, lacked a containment facility that would prevent radioactive substances from escaping in the event of an accident.

Metsamor is frequently cited as the most dangerous reactor of its kind in the post-Soviet region and a core of one of the world’s five nuclear disasters waiting to happen. In 2011, National Geographic even suggested that Metsamor might be "the world’s most dangerous nuclear plant."

In February, the European Commission (EC) said in a report titled “Partnership Implementation Report on Armenia” that the Metsamor NPP, which is already outside its 40-year lifespan, should be shut down and safely decommissioned. According to the report, the nuclear reactor cannot be upgraded to modern international safety standards. EC further urged Armenia’s government to rapidly adopt a road map or action plan to address the issue.

Armenia and the EU have been negotiating to close Metsamor NPP since the late 1990s. Armenia agreed to shut down the reactor in 2004. The EU had even supplied Armenia with funds to close the plant and find substitute energy supplies. However, Yerevan’s unwillingness to close the plant led to failure and the grant aid was frozen in 2005. The subsequent formal cooperation agreements between the EU and Armenia, including in 2006, 2011, 2016, and 2017 have all failed to produce a final agreement for the closure and decommissioning of the Metsamor plant. Yerevan has reportedly held simultaneous talks with Moscow to extend the reactor’s lifespan.

In February 2020, the Armenian government included the reactor in the country’s 2040 energy strategy, which highlights the further extension of the plant’s life and a 12-15 percent increase in its output. Prime Minister Pashinyan has confirmed the continuation of Metsamor NPP’s operation, saying “we will extend the lifecycle of the nuclear power station as long as possible." In late 2020, the Armenian government announced that its Metsamor NPP would close for five months in 2021 to extend its lifespan.

A major nuclear or radiation accident that can happen at Metsamor is believed to affect the people of a greater region spanning Armenia, Turkey, Azerbaijan, Georgia, Iran, Russia, and southern Europe.

However, both in Armenia and beyond its borders, some people do not want the extremely dangerous NPP to shut down.

An opinion article written by Stepan Altounian in December 2020, an ethnic Armenian living in California, called for the use of nuclear wastes of Metsamor for producing “dirty bombs,” a type of radiological dispersal device (RDD), which combines conventional explosives, such as dynamite, with radioactive material. The author is convinced that such bombs should be dropped on Azerbaijan’s capital city of Baku and “turn it into a wasteland for the next 5,000 years.” Altounian said Armenia should have considered the use of nuclear weapons against Azerbaijan during last year's 44-day-long war.

Earlier, Armenia’s former Prime Minister Hrant Bagratyan called for developing nuclear weapons based on the nuclear materials from Metsamor. He even claimed that Armenia already had such weapons of mass destruction.

On April 16, 2021, officers of the State Security Service of Georgia, which borders Armenia, detained two people in Kutaisi, who were attempting to illegally sell the radioactive substance Americium-241. In 2016, Georgian authorities reportedly captured a Georgian man and several ethnic Armenians, which were believed to be former members of the Armenian Security Service, who were also attempting to smuggle and illegally sell some $200 million worth of nuclear-grade materials. The smuggled nuclear material could be used for creating “dirty bombs.”