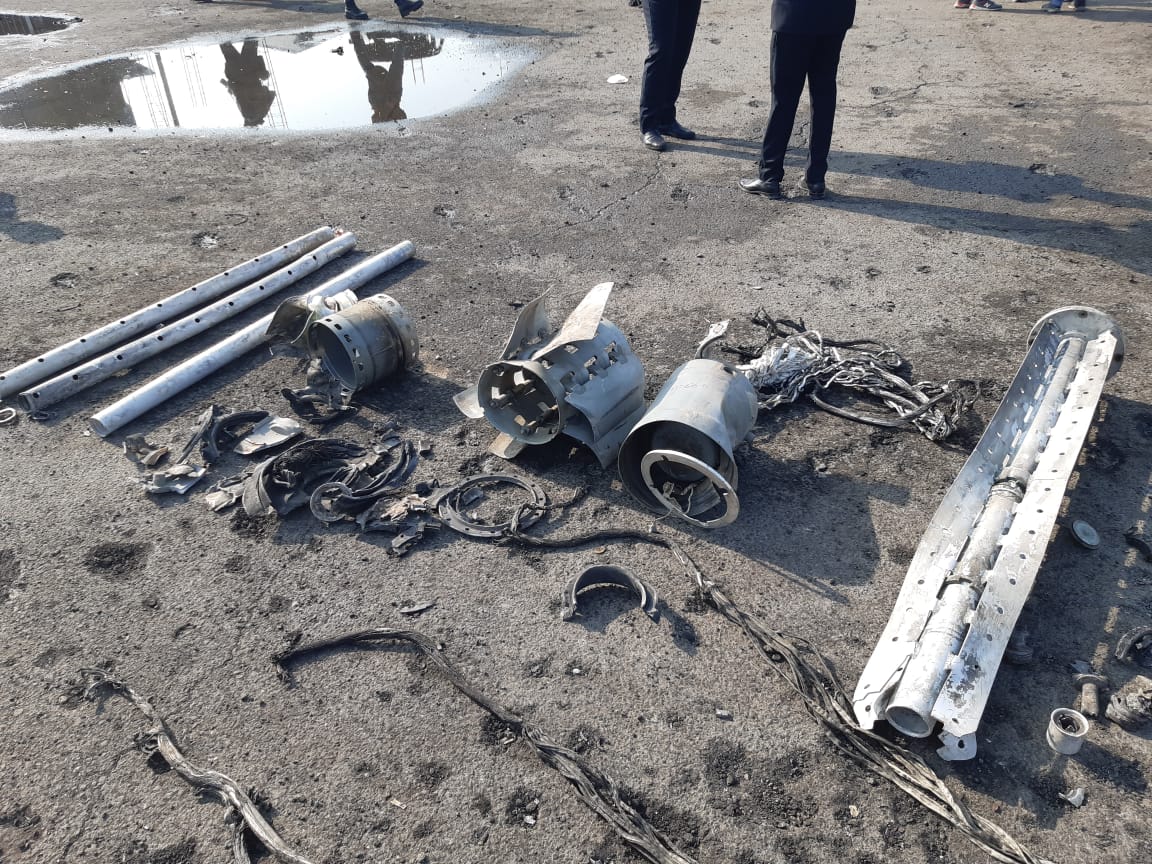 Some remnants of Smerch rockets used by Armenia's forces in an attack on the Barda city of Azerbaijan on October 28. As a result of two consecutive missile attacks on Barda, 27 civilians died and 107 wounded in the city that is home to 40,000 people and located at least 30 kilometers far from the battlefield in the Nagorno-Karabakh region, which is the internationally recognized territory of Azerbaijan but occupied by Armenia. / Aziz Karimov / Human Rights Watch

Following a month of clashes between Armenia and Azerbaijan over the Nagorno-Karabakh region, dozens of civilians were killed as a result of Armenian bombardment of multiple Azerbaijani cities.

According to the statistics data compiled by the Prosecutor General's Office of Azerbaijan, missile fires launched by Armenia's forces killed 91 civilians and wounded 404 others in Azerbaijan as of November 3.

Over 2,480 houses, 97 multi-apartment residential buildings, and 461 civilian infrastructure facilities have been damaged or completely destroyed in the wake of Armenian army's attacks on densely populated civilian areas in the cities and districts of Azerbaijan, including Ganja, Barda, Tartar, Agjabadi, Goranboy, Mingachevir, Kurdamir, Gabala, Aghdam, and Fuzuli.

The deadliest attack carried out by Armenia's forces took place in two consecutive missile fires on the Barda city of Azerbaijan on October 27 and 28. As a result of the attack, 27 civilians died and 107 wounded in the city that is home to 40,000 people and located at least 30 kilometers far from the battlefield in the Nagorno-Karabakh region, which is the internationally recognized territory of Azerbaijan but occupied by Armenia.

"Armenian forces either fired or supplied internationally banned cluster munitions and at least one other type of long-range rocket used in an attack on Barda city, 230 kilometers west of Azerbaijan’s capital, Baku on October 28, 2020," Human Rights Watch (HRW) said on October 30.

HRW analyzed the photos of cluster munition remnants found at and near the attack scene to conclude that the missile was a Smerch cluster munition rocket and a Smerch parachute-retarded high-explosive fragmentation rocket. A mix of large explosions and “pops” of smaller explosions that were heard following the attack was consistent with the detonations of the 9N235 submunitions, according to HRW. The 9N235 is a high explosive fragmentation submunition compatible with the Russia-made RSZO 9K58 "Smerch" multiple rocket launcher.

Prior to the attacks on Barda, Armenia's forces launched four separate rocket fire on Ganja, the second-largest city of Azerbaijan situated as far as 60 kilometers from the frontline, which has a population of over 500,000. The first attack took place on October 4, killing one civilian and wounding more than 30 others. Ganja was hit for the second time on October 8 with no reports of casualties. The third attack came on October 11 when at least seven civilians were killed and 33 wounded. The deadliest assault on the city took place on October 17 to claim the lives of fifteen and cause injuries to 55 civilians. More than 20 houses have been completely destroyed.

The Azerbaijan National Agency for Mine Action (ANAMA) identified the missiles fired at Ganja to be SCUD/Elbrus Operative-Tactical Ballistic Missile. R-17 Elbrus, designated as SS-1C Scud-B by NATO, is a Russia-made short-range ballistic rocket with a range of up to 300 kilometers. It is able to carry 985 kilograms of conventional and 5-80 kilotons of nuclear warheads.

The UN High Commissioner for Human Rights, Michelle Bachelet warned that the artillery attacks on civilians in the ongoing fighting between Armenia and Azerbaijan could amount to war crimes. She said the continuing indiscriminate attacks on densely populated civilian areas contravened the international humanitarian law.

“International humanitarian law cannot be clearer. Attacks carried out in violation of the principle of distinction or the principle of proportionality may amount to war crimes, and the parties to the conflict are obliged to effectively, promptly, thoroughly and impartially investigate such violations and to prosecute those alleged to have committed them,” Bachelet said in a statement issued on Monday, UN News reports.

The renewed clashes between the Armenian and Azerbaijani forces broke out on September 27 when Armenia's troops deployed in the occupied Azerbaijani lands began shelling heavily the military positions and civilian settlements of Azerbaijan. The move prompted immediate counter-attack measures by the Azerbaijani army to push back the enemy's offensive. Since the start of hostilities to date, the Azerbaijani army has liberated the occupied cities of Jabrayil, Fuzuli, Zangilan and Gubadli, as well as dozens of villages, settlements and strategic heights in the districts of Tartar, Fuzuli, Jabrayil, Khojavend, Zangilan, Gubadli and Kalbajar.