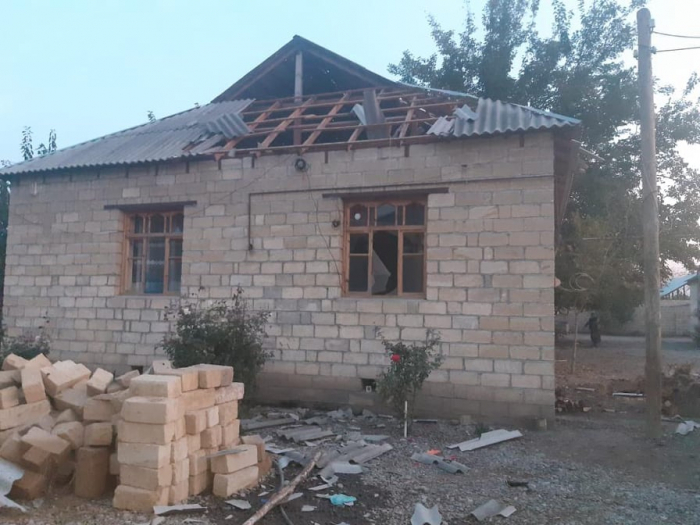 The missile attack of Armenia's armed forces killed 4 civilians and injured 13 as 5 private houses were damaged in Garayusifli village of Barda district of Azerbaijan on October 27. / Report.Az

Armenia’s missile attack has killed 4 civilians, including 2 children, and wounded 13 in Azerbaijan’s eastern district of Barda, blatantly violating the requirements of the recently announced humanitarian truce.

The missile attack has seriously damaged 5 private houses in the Garayusifli village of the Barda district on October 27, the Ministry of Emergency Situations of Azerbaijan reported.

Starting from the noon of October 27, Goranboy and Barda districts were shelled intensively by Armenia's armed forces with missiles and heavy artillery from different directions.

Azerbaijan’s Ministry of Foreign Affairs described the shelling as “another war crime committed by Armenia in recent days in gross violation of the agreed humanitarian ceasefire for the third time through the continued efforts of international mediators and its commitments under the international humanitarian law”.

“The next bloody crime committed by the armed forces of Armenia on the eve of the meeting of the Foreign Ministers of the two countries with the OSCE Minsk Group Co-Chairs in Geneva is a clear demonstration that the aggressor state Armenia is not interested in a political solution to the conflict and aims to undermine negotiations by all means,” the statement reads.

Azerbaijan’s Prosecutor General’s Office announced on 26 October that 65 Azerbaijani civilians, including 18 women, 10 children, were killed and 297 injured since the start of the ongoing clashes on September 27.

Meanwhile, Secretary of the State Commission of Azerbaijan on Prisoners of War, Hostages and Missing Persons, Ismayil Akhundov told journalists that Armenia does not want to take over bodies of 30 servicemen despite the regulations of the humanitarian ceasefire.

He added that Azerbaijan reaffirmed its commitment to the international humanitarian law, as well as the requirements of the Geneva Convention, and reassured its humanist position after the Moscow Declaration on a humanitarian ceasefire between Yerevan and Baku on October 10.

A new round of clashes erupted between the Armenian and Azerbaijani forces on September 27 with Armenia’s troops shelling heavily the military positions and civilian settlements of Azerbaijan. Since the start of hostilities to date, the Azerbaijani army has liberated the occupied cities of Jabrayil, Fuzuli, Zangilan and Gubadli, as well as dozens of villages, settlements and strategic heights in the districts of Tartar, Fuzuli, Jabrayil, Khojavand, Zangilan, Gubadli and Kalbajar.