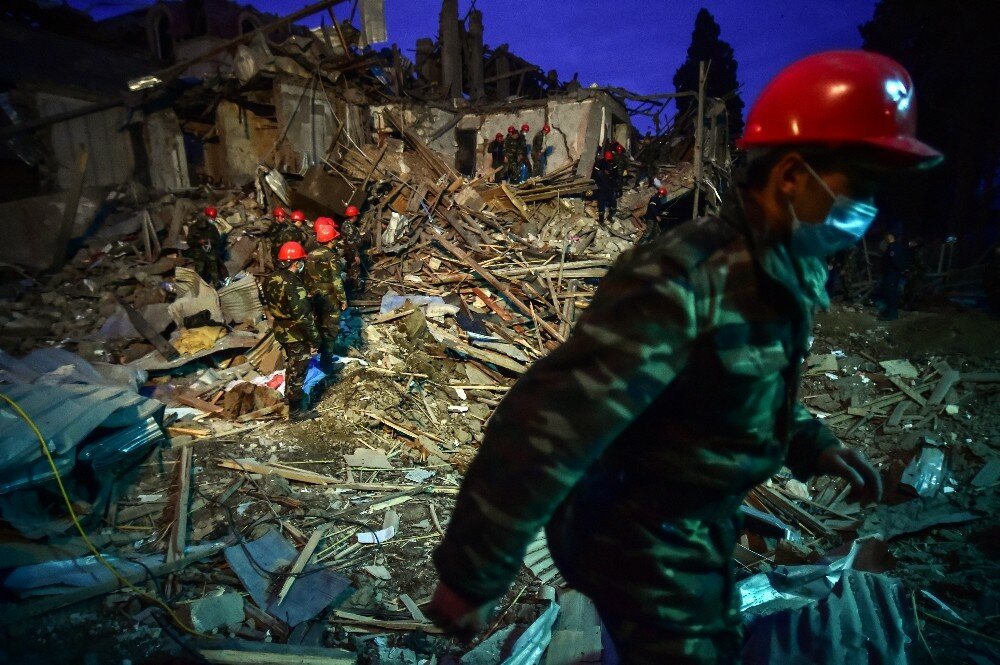 Armenia's forces hit Ganja, Azerbaijan's second-largest city, killing and injuring dozens of Azerbaijani civilians, less than a day after a humanitarian ceasefire between Yerevan and Baku came into effect.

Hikmat Hajiyev, senior aide to Azerbaijan's president, said Armenia is hiding behind humanitarian ceasefire as part of its plan to attack Azerbaijani civilians.

"In the midst of night, Ganja city came under missile attack of Armenia. 3 residential buildings [were] destroyed. 7+ civilians, as well as women [were] killed. 33 civilians including kids [were] seriously wounded," Hajiyev wrote on Twitter.

The humanitarian ceasefire reached on Saturday called for the exchange of hostages and dead bodies through the mediation of the International Committee of the Red Cross. Last night's attack on Ganja was the second of its kind throughout the ongoing clashes between the forces of Armenia and Azerbaijan. The city was first hit on October 4. Ganja's population is over 500,000 and the city is located about 60 kilometers far from the battlefield in Azerbaijan's occupied territories. 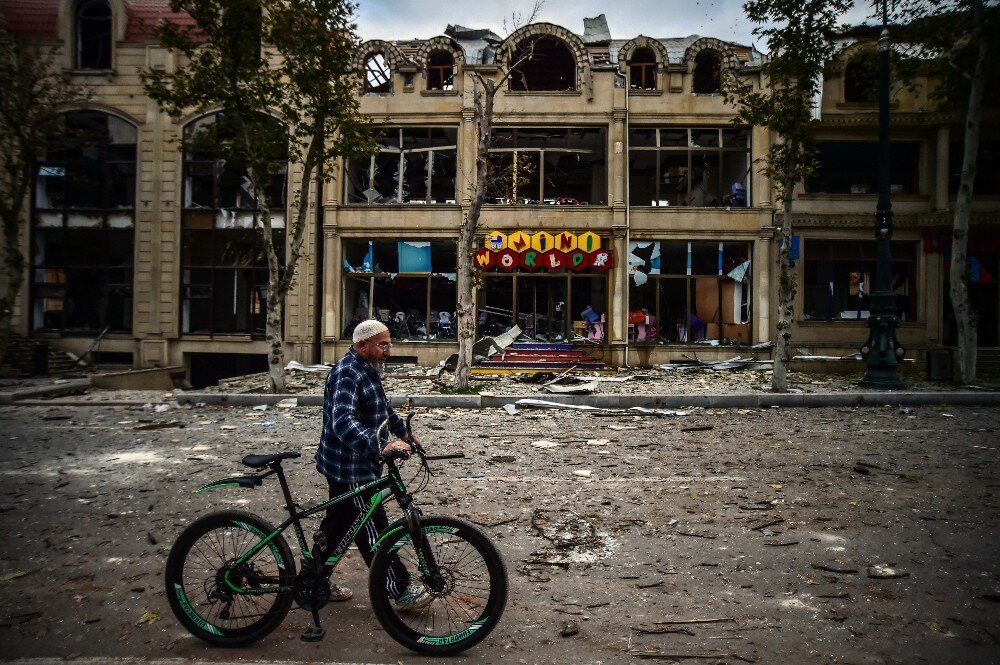 An elderly man walks through the street destroyed in the wake of Armenia's heavy missile attack, Ganja, October 11, 2020 / Yeni Şafak

Hajiyev added that the same attack was committed on the Mingachevir city of Azerbaijan, as well. The city was hit by Smerch heavy multiple rocket launcher which was received by Armenia during the humanitarian ceasefire period. Atantis Armenian Airlines transported the missiles and missile system onboard civilian aircraft to Armenia, according to Hajiyev.

“Within the framework of humanitarian aid, the corrupt air carrier Atlantis Armenian Airlines, which is under sanctions, is transporting missiles and missile systems to Armenia on civil aircraft. This is a flagrant violation of the Chicago Convention and the rules of the International Civil Aviation Organization,” he wrote in his Twitter account.

Mingachevir, Azerbaijan's fourth most populated city, is home to the country's largest water dam. Consequences of a possible strike on the Mingachevir reservoir could be catastrophic for Azerbaijan and the entire region. Officials at the National Center of Environmental Forecasting insist that water from the dam could inundate a huge territory in Azerbaijan stretching from the country's central part toward east up to capital Baku over 240 kilometers. Such damage could lead to environmental, infrastructure and humanitarian disasters, which could kill countless civilians.

The latest clashes are the longest and fiercest fighting between Armenia and Azerbaijan since the countries reached the ceasefire in 1994. The skirmishes along the Line of Contact in the occupied territories of Azerbaijan erupted on September 27 after Armenia's troops began shelling military and civilian positions of Azerbaijan. Azerbaijani forces took immediate counter-attack measures to repel the offensive. The fighting quickly escalated as both sides have intensively deployed artillery, UAVs, mechanized forces, and infantry along the frontline.

As of Saturday, Armenian authorities confirmed the deaths of 405 servicemen. However, the Defense Ministry of Azerbaijan said 2,300 servicemen of Armenia have been killed or wounded. Azerbaijan has not revealed the total number of military losses. With the death toll of the recent attack on Ganja, the overall number of civilian casualties reached 40 in Azerbaijan along with over 200 injured residents.

The Armenia-Azerbaijan Nagorno-Karabakh conflict, which is over 30 years old, is one of the main threats to peace and stability in South Caucasus. The roots of the conflict stem from the rise of anti-Azerbaijan sentiments in Armenia in 1988 due to Yerevan's illegal claims for internationally recognized Nagorno-Karabakh region of Azerbaijan.

Following the Soviet Union’s dissolution in 1991, Armenia launched a military campaign against Azerbaijan that lasted until a ceasefire deal was reached in 1994. Armenia occupied 20 percent of Azerbaijan’s internationally recognized territories including the Nagorno-Karabakh region and seven surrounding districts. One million ethnic Azerbaijanis were forcibly displaced from these areas and 30,000 were killed.

Armenia continues to defy fulfilling four UN Security Council resolutions on the withdrawal of its occupying forces from Azerbaijani lands and return of internally displaced Azerbaijanis to their native land.