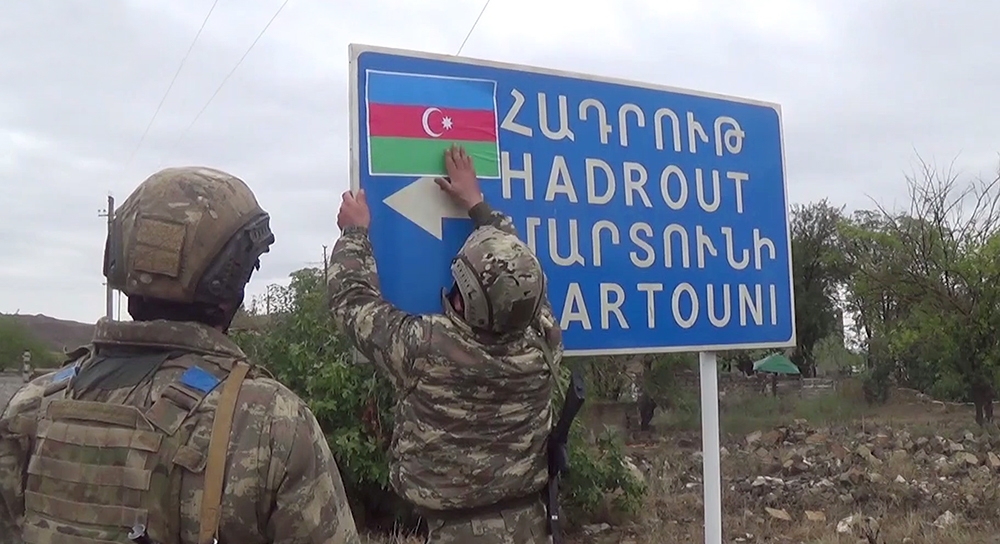 The ceasefire in the Karabakh region of Azerbaijan was once again breached by an Armenian armed group on Sunday leaving one Azerbaijani serviceman dead in the wake of clashes.

"On December 27, at about 15:30, an illegal Armenian armed group or a detachment of six remnants of the Armenian armed forces that remained in the territory attacked the units of the Azerbaijan Army in the direction of the Aghdam (Akaku) village of the Khojavend region," reads a statement issued by the Azerbaijani Defense Ministry on Monday. "As a result of the attack a serviceman of the Azerbaijan Army, soldier Ganbarov Elmir Rayil was killed and soldier Aliyev Emin Suleyman has been injured. The wounded soldier was evacuated to a medical institution after providing first medical aid, and nothing threatens his life."

"As a result of the actions taken, all six members of the illegal Armenian armed group were annihilated," the ministry added.

The incident marks the second deadly breach of the ceasefire by the Armenian armed groups in the Khojavend district since the deployment of the ceasefire in the Karabakh region of Azerbaijan on November 10.

On December 13, the State Security Service of Azerbaijan and the Ministry of Defense of Azerbaijan announced the conduction of an anti-terror operation against the Armenian armed groups that refused to leave the territories under Azerbaijan's control in the region and committed deadly violations of the tripartite ceasefire statement agreed between Azerbaijan, Armenia, and Russia.

According to a statement, some part of Armenian armed forces remained in the forest area in the north-western part of Hadrut settlement of Azerbaijan’s Khojavend district following the trilateral ceasefire's entering into force on November 10. Citing the Armenian official structures, the Armenian media reported that the armed groups were lost in the forest and the government of Armenia appealed to the Russian peacekeepers to help them withdraw from the territory. Despite the joint evacuation efforts of the Azerbaijani army and the Russian peacekeepers, the Armenian armed groups refused to leave the forest area and created battle positions. They later committed fatal terrorist and provocative acts, as well as subversive actions against Azerbaijani civilians and military servicemen in the area.

"As a result of a sudden attack by Armenians on November 26, 2020, three servicemen were killed and two were injured in the Sur village, Khojavend district, which was liberated from the Armenian occupation. On December 8, one Azerbaijani serviceman was killed and an employee of Azerbaijan’s Azercell company was severely injured during the installation of communication lines and transmission equipment near Hadrut settlement in the same district," the State Security Service of Azerbaijan reported, adding that the incidents triggered an anti-terror operation aimed at ousting illegal armed groups from the territory.

The Russian Defense Ministry confirmed the incident near Hadrut settlement on December 11, which was the first report about ceasefire violation and casualties since the trilateral statement signed by the presidents of Azerbaijan and Russia, and the prime minister of Armenia took effect on November 10. Commander of the Russian peacekeepers in the Nagorno-Karabakh region of Azerbaijan, lieutenant-general Rustam Muradov said peacekeepers stopped the violation of the ceasefire and the situation in the region returned to normal.

Armenia and Azerbaijan have been at odds for decades over the Nagorno-Karabakh (Daghlig Garabagh) region, which is internationally recognized territory of Azerbaijan. In 1991, Armenia kicked off military aggression against Azerbaijan to occupy the region. The full-scale war lasted until a ceasefire deal in 1994. As a result, Armenia occupied 20 percent of Azerbaijan’s internationally recognized territories – the Nagorno-Karabakh region and seven surrounding districts. Over 30,000 ethnic Azerbaijanis were killed and one million were expelled from those lands in a brutal ethnic cleansing policy conducted by Armenia. Although the UN Security Council adopted four resolutions in 1993 demanding the immediate withdrawal of the occupying forces from the Azerbaijani lands and the return of internally displaced Azerbaijanis to their native lands, Armenia failed to comply with all four legally binding documents.

Russia mediated the signing of a decisive ceasefire between Armenia and Azerbaijan on November 9. The document confirmed Azerbaijan's territorial regains in the war, obliged Armenia to return three occupied districts to Azerbaijan, and mandated Russia to deploy peacekeeping forces in the Nagorno-Karabakh region of Azerbaijan. Currently, a Russian contingent of 1,960 peacekeepers oversees the peace and adherence to the ceasefire agreement in the region. As part of the agreement, Armenia returned the occupied parts of the Aghdam district to Azerbaijan on November 20, as well as the occupied districts of Kalbajar and Lachin on November 25 and December 1, respectively.

Following the incidents, the Azerbaijani authorities called on the Armenian side to adhere to the trilateral statement, to support the observance of the ceasefire regime and peace, to refrain from provocations through such armed detachments, as well as from deliberately escalating the situation in the region. The Azerbaijani defense ministry vowed to take firm measures if Armenian armed groups resort to similar incidents again.