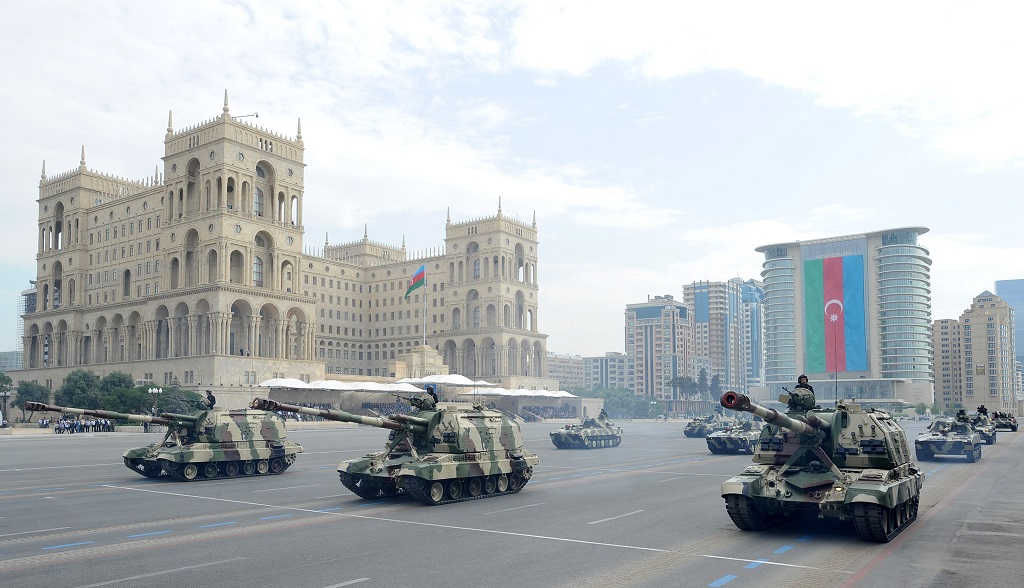 A solemn military parade took place in Azerbaijan in June 26, 2013, where the country showcased its military equipment and personnel / President.Az

A top official in Baku said violations of the long-standing ceasefire at the line of contact between Armenian and Azerbaijani armed forces could spark another war, similar to the one that took place in the 1990s in the Nagorno-Karabakh region of Azerbaijan.

“Armenians are not done only with the occupied lands. They shell the Azerbaijani villages and civilian settlements from the frontline [positions] and the heights they have occupied,” Hasanov said.

Ali Hasanov’s comments came a week after similar remarks were made by Azerbaijan’s Defense Minister Zakir Hasanov on February 19. Zakir Hasanov told the European Union Special Representative for the South Caucasus and the Crisis in Georgia, Toivo Klaar, that a sudden eruption of war between Armenia and Azerbaijan was not out of the picture, as the two armies are still stationed along the line of contact, a heavily militarized area that emerged as the result of a three-year was in the 1990s.

“People [in Azerbaijan] demand to return back to their native home. In the face of that demand, the Azerbaijani state, of course, is thinking about the liberation of its territories by other means, such as war,” Ali Hasanov said in his interview with TRT World.

In April 2016, the two sides went to war once again after Armenia began a late-night shelling across the line of contact. The war lasted for four days only, but enabled Azerbaijani troops to re-take two strategic hilltop and a village, roughly about 2,000 hectares (approximately 5,000 acres).

The International Crisis Group, an organization committed to preventing and resolving deadly conflicts, say the signs of war are looming.

A 2017 report by the Group titled “Nagorno-Karabakh’s gathering war clouds,” noted the resumption in the intense exchange of fire between Armenia and Azerbaijan with not only small arms, but also grenade launchers and anti-tank missiles coming online.

“The Armenian side cites elevated expectations among the Azerbaijani public coupled with Baku’s assertion that it imminently wants to reestablish control over Nagorno-Karabakh. Azerbaijan warns that – at the very least – Yerevan might consider provoking a conflict in order to regain control over the two strategic heights lost in April 2016,” the report reads.

Armenian and Azerbaijani casualties are reported to be over 35,000, with most on the Azerbaijani side throughout roughly three decades.

Ali Hasanov said the Azerbaijani army is prepared to take back the land it lost to Armenia, but that Baku “doesn’t want any more bloodshed.”