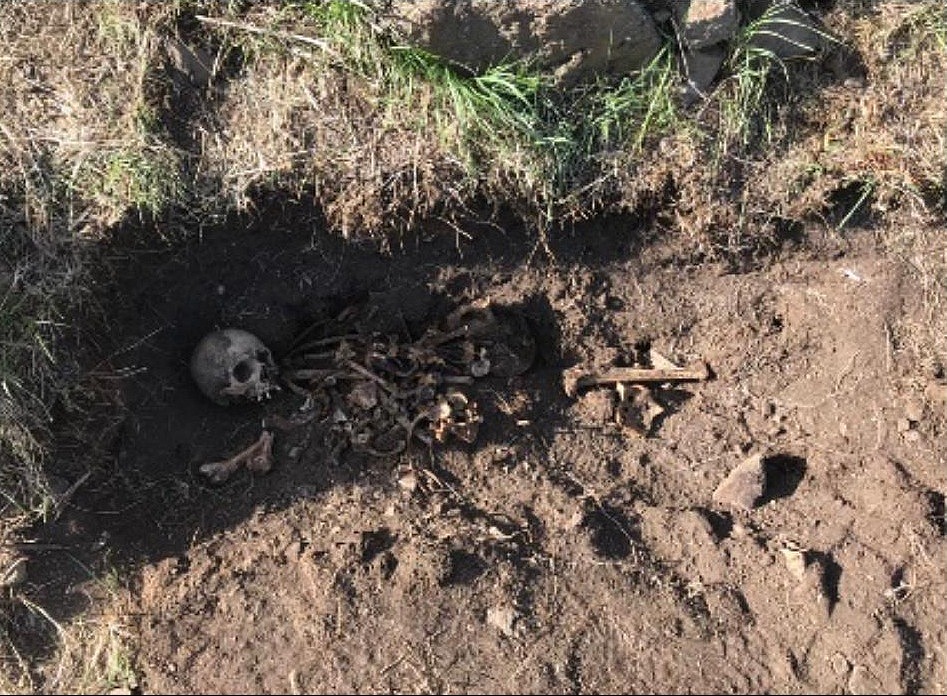 Investigators found the remains of 12 civilians in Azerbaijan’s liberated Kalbajar district, who had been murdered by the Armenian armed forces in 1993. / Prosecutor General's Office of Azerbaijan

The remains of 12 civilians have been found in Azerbaijan’s liberated Kalbajar district, where investigators were searching for bodies of victims of the Bashlibel mass murder committed by the Armenian armed forces in 1993.

According to the data compiled by Azerbaijan’s Prosecutor General’s Office, the remains were found in a cave buried at a depth of 50 centimeters.

“During the investigation, various household items found at the crime scene - in the caves where civilians were hiding, cartridges and bullets proving the intentional killing of civilians were packed and registered in accordance with the requirements of criminal procedure legislation,” reads the statement issued by the Office.

In order to determine the victims’ identities, the samples of DNA (deoxyribonucleic acid) were taken from the remains of the corpses and family members who claimed to be close relatives of the buried persons.

The village of Bashlibel, with a population of 1996 people, in Azerbaijan’s Kalbajar district witnessed one of the bloodiest acts of Armenian terror against ethnic Azerbaijanis.

On April 3, 1993, the Armenian armed forces attacked Bashlibel village, looting and burning the villagers’ houses. Sixty-two Azerbaijanis who could not leave the village took refuge in natural caves in the mountainous terrain called “Portda,” located at the highest part of the village. Two weeks later, Armenian soldiers found their shelter and began firing on caves, killing 12 civilians, including men, women, and children. Another 14 people were captured, of which nine later died of emotional and psychological trauma.

The investigators revealed that 36 people managed to escape from the Armenian armed forces, but seven out of them died from injuries received during the siege. Those who survived managed to hide in shelters and escape only after 113 days of a life-and-death struggle in July. They avoided the siege of the Armenian army by going through secret mountain roads and moving only at night.

Gadim is a survivor of the Bashlibel tragedy, whose grandmother was murdered by Armenian soldiers.

“I wanted to go to the village to find out about my grandmother Mayakhanim; we were unaware of what happened to her. But I was afraid to go alone because the Armenians were in the village. A few days later, I went together with my fellow villagers. We saw that the Armenians killed my grandmother. She was shot to death while she was trying to leave the house,” Gadim said.

Azerbaijan’s Prosecutor General’s Office revealed it would continue its activities to investigate the crimes against peace and humanity committed by Armenia against Azerbaijani citizens.

Over 30,000 ethnic Azerbaijanis were killed, and one million others were expelled from their homes in a brutal ethnic cleansing policy conducted by Armenia during the 1991-1994 First Karabakh War.

The mass murder in Bashlibel was part of the systematic acts of terror committed by the Armenian troops against civilian Azerbaijanis during the war. Before Bashlibel, the Armenian armed forces organized the same genocidal acts in the town of Khojaly on February 26, 1992, and in Kalbajar’s Aghdaban village on April 8-9 of the same year. The death toll of massacres in Khojaly and Aghdaban was 613 and 67, respectively.