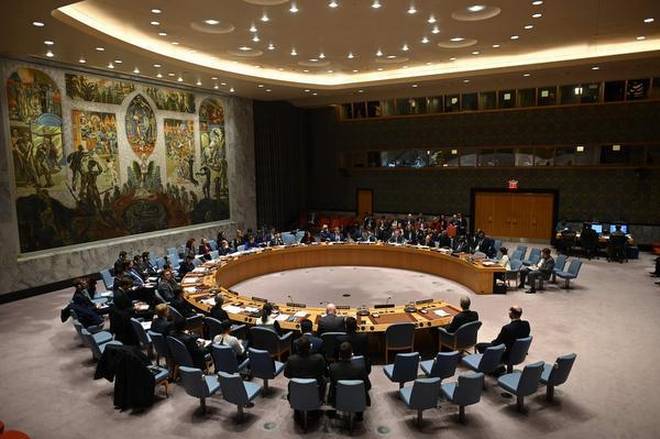 In a joint statement, the leading nuclear-weapon states reaffirmed their primary responsibility to avoid war between the nuclear states and to reduce strategic risks, while aiming to work with all countries to create an atmosphere of security. / AFP

Leaders of the five global nuclear powers have pledged to prevent atomic weapons from spreading and dial down the risk of nuclear war amid rising tensions in nuclear-armed states.

In a joint statement issued by the five permanent members of the UN Security Council (SC), namely the United States, the United Kingdom, France, Russia and China collectively known as the P5, the leading nuclear-weapons states reaffirmed their primary responsibility to avoid war between the nuclear states and to reduce strategic risks, while aiming to work with all countries to create an atmosphere of security.

"We affirm that a nuclear war cannot be won and must never be fought," reads the statement published on the Kremlin's official website on Monday. "As nuclear use would have far-reaching consequences, we also affirm that nuclear weapons – for as long as they continue to exist – should serve defensive purposes, deter aggression, and prevent war. We believe strongly that the further spread of such weapons must be prevented."

The statement goes on to underline the importance of addressing nuclear threats and preserving and complying with non-proliferation, disarmament and arms control agreements, including the Nuclear Non-Proliferation Treaty (NPT), which is aimed at achieving nuclear disarmament by nuclear-armed states. The landmark international agreement was designed to prevent the spread of nuclear weapons and weapons technology and promote cooperation in the peaceful uses of nuclear energy. The treaty came into force in 1970 after being opened for signature in 1968. In total 191 states have signed the treaty including the five recognized nuclear-weapon states.

"We each intend to maintain and further strengthen our national measures to prevent unauthorized or unintended use of nuclear weapons," the statement reads.

"We reiterate the validity of our previous statements on de-targeting, reaffirming that none of our nuclear weapons are targeted at each other or at any other State."

The rare joint pledge was signed at the time of rising tensions between Russia and the West over Ukraine, with western officials concerned that at least 100,000 servicemen have been stationed along the Ukrainian border for an invasion of the former Soviet country. Russia has repeatedly claimed that it is free to move its troops within its borders and has no plans to attack Ukraine, yet, the US and its allies kept warning Moscow of a massive coordinated sanctions response if the military invasion of Ukraine happens.

Tensions between Russia and the West have soured in recent years, mostly due to the Ukrainian crisis in 2014 that was followed by Russia's takeover of Crimea — a Ukrainian territory about the size of Maryland that extends into the Black Sea. The West has long accused the Kremlin of backing anti-government separatist regimes in Ukraine's eastern regions of Donetsk and Lugansk — the claims Russia denies.

Western experts believe that Russia's military activities at the borders of the Baltic States and Ukraine, as well as its increasing military influence in Belarus, pose security challenges impacting the region.

Tensions between Moscow and the West reached a boiling point in April after a massive buildup of Russian troops near Ukraine’s border. Russia did not deny the troop movements but insisted that Moscow had no intentions of threatening Ukraine. For two weeks, more than 10,000 servicemen, 1,200 units of equipment, as well as 40 warships were positioned in Crimea, in what Russia said was a part of a snap training exercise.

"This document was formulated on our initiative and with the most active participation of Russian representatives," Foreign Ministry Spokeswoman Maria Zakharova said on Monday at a briefing.

"Its release was supposed to coincide with the start of the Tenth Review Conference of the Parties to the Treaty on the Non-Proliferation of Nuclear Weapons. It had been scheduled to open in New York on January 4 but was postponed due to the worsening epidemiological situation in the United States. Nevertheless, given the importance and self-sufficiency of this joint statement, the nuclear powers decided not to delay its publication," she added.