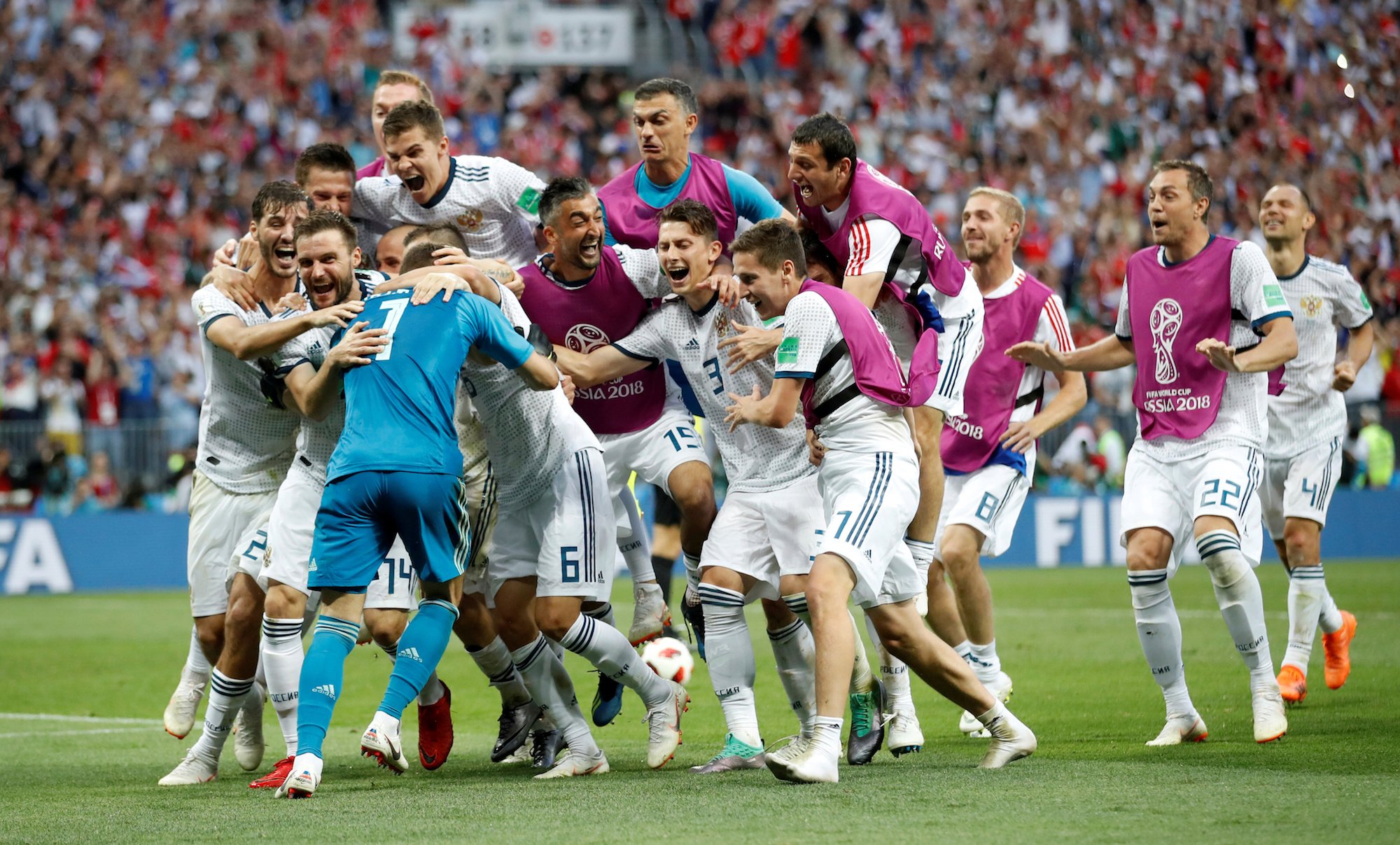 Igor Akinfeev saved two penalties and ensured Russia its place in the quarterfinals of the World Cup for the first time in its history. / Getty Images

On Sunday the 2018 World Cup host nation team had fans packed into Luzhniki Stadium in Moscow singing “Kalinka,” when the Russian national football (soccer) team beat Spain in the first game of the knock-out phase. Penalty kicks sealed the deal for Russia, in a game that ended 4-3 in Russia’s favor, securing the team a place in the quarterfinals.

Playing in front of 80,000 fans, the captain of the Spanish national team, Sergio Ramos, scored the first goal in the 12th minute of the meeting with the help of Sergei Ignashevich. Late in the first half of the match Artem Dzyuba equalized the score with a penalty kick for a handball by Gerard Pique.

A winner was not declared without the game going into overtime, although Spain had several chances to overcome its rivals as its team owned the ball approximately 75 percent of the time throughout the match.

Russia made all four of its attempts in the penalty shootout, while missed penalties from Koke and Lago Aspas ensured Russia its place in the quarterfinals of the World Cup for the first time in its history.

"We are having a fantastic World Cup," said goalkeeper Igor Akinfeev, whose two penalty saves turned him into a national hero after the match. "Not just our fans, but the fans of other countries got a sense of this atmosphere and understood that Russians really know how to play football and want to play football."

“This is an unforgettable match! The game was difficult, such a heat of passion, especially during extra time! But we believed in our team! And the guys justified our hopes - deservedly won on penalties! Thanks to the team for this holiday! For a historic holiday! This day has already entered the history of Russian football,” commented Sports Minister Pavel Kolobkov.

A historical victory of Russia’s team over Spain is an incredible step forward for a home in the tournament. However, there is no time to rest as Russia’s team will have a match with the Croatia’s national team, who has beat Denmark after penalty shootout win on the same day when Spain was knocked out of the World Cup.

Although Russian President Vladimir Putin could not personally join the audience, Press Secretary Dmitry Peskov said that the president followed the course of the game.

“Immediately after the end of the game, Putin again called Cherchesov, congratulated the whole team with an impressive victory, and the coach - with the chosen tactics that gave its results,” added Peskov. “Putin said that the main thing in sports is the result, and this result is victorious for our team. The Head of State wished both Cherchesov and all members of the national team success in the next game.”