What To See, Eat & Buy In Azerbaijan’s Sheki Region 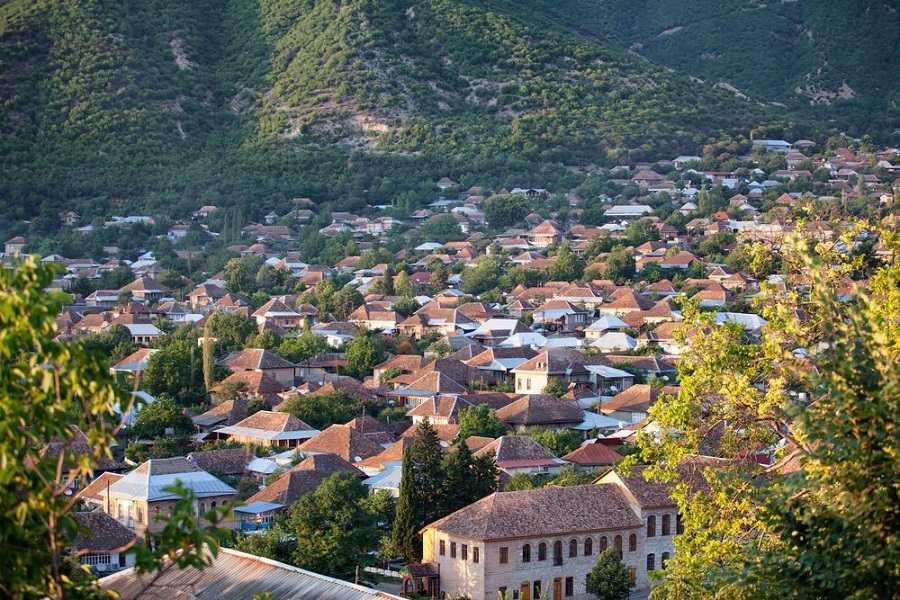 If you are in Azerbaijan anytime soon, be sure to visit a city that has been recognized by UNESCO as the city of crafts and folk art. / Flickr

With cobblestone streets, ancient and medieval architecture, breathtaking landscapes, and rich cuisine, Sheki is a true travel gem. Located roughly 11 miles from Azerbaijan’s border with Russia, the area’s famed ancient and medieval architecture, silk fabric, mouth-watering cuisine and handmade crafts are just some of the many reasons to pay it a visit.

If you are in Azerbaijan anytime soon, be sure to visit a city that has been recognized by UNESCO as the city of crafts and folk art.

Don’t miss the medieval fortress known as Galarsan-Gorarsan in the village of Kish, located about 2.5 miles north of Sheki. According to legend, in 1743, when Nadir Shah Afshar demanded Sheki Khan Haji Chelebi resign and obey him, the latter refused. In his response to the shah, Chelebi said “Galarsan, gorarsan!” (meaning “When you come, you’ll see!”). Chelebi was confident that the fortress would be able to withstand any attack, and after a year of trying Nadir Shah and his army gave up in failure.

Visitors to the sight can enjoy majestic mountain views from the fortress walls, where emerald forests can be seen as the Kish River winds through. Today, the medieval fortress known as Galarsan-Gorarsan is a “must-see” place for all those who come to Sheki.

More than 250 years ago Huseyn Khan Mushtad, a grandson of the same Haji Chelebi mentioned above, ordered the construction of a summer residence right in the city center. Dozens of skilled craftsmen decorated the facade of the palace with drawings depicting scenes of hunting and war. With two floors, six rooms, four corridors and two mirrored balconies, the Khan’s Palace was built fully from a wooden frame without using a single nail. All windows and doors are made of wood and millions of pieces of stained glass, or shabaka. When the sunlight hits the windows, all the colors of the rainbow can be found in the interior of the rooms.

A reception hall is considered the richest room in the palace, as it features miniatures displaying the military power of the Khanate, as well as its attitude towards friends and enemies. You can dive into the whole history of the Sheki Khanate and watch the weapons of the khan’s troops and their enemies, clothing, banners, military customs and many others. There are also scenes of hunting for elephants, rare birds, and even the dragon. The ceiling of the room is painted with images of the khan’s coat of arms and various symbols. 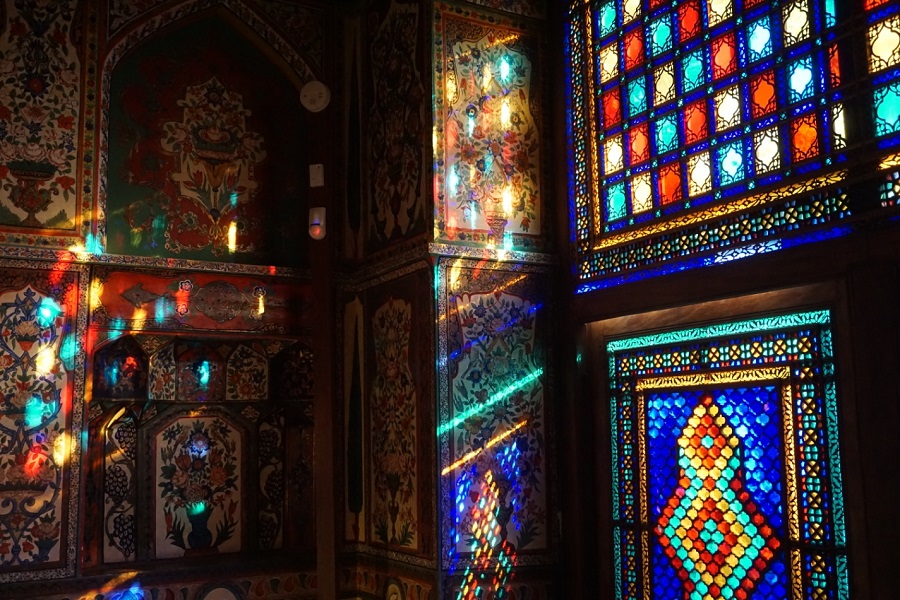 All windows and doors are made of wood and millions of pieces of stained glass, or shabaka.

Azerbaijan is rich in culinary delights that attract thousands of tourists each year, while Sheki, with its famous piti and halva, is considered one of the country’s gastronomic capitals.

As the king of Sheki cuisine, piti is a thick soup that is not for the rushed and hurried. It takes between eight and 12 hours to cook, which combines lamb, potatoes, peas, onions, garlic, chestnuts and herbs. Women from Sheki traditionally cook piti in a small clay pot filled with water and then placed in an oven; a few minutes before serving, saffron is added. Piti is served with a traditional thin flatbread called lavash, pickles and sumac, which gives the dish a particularly mild sour taste. 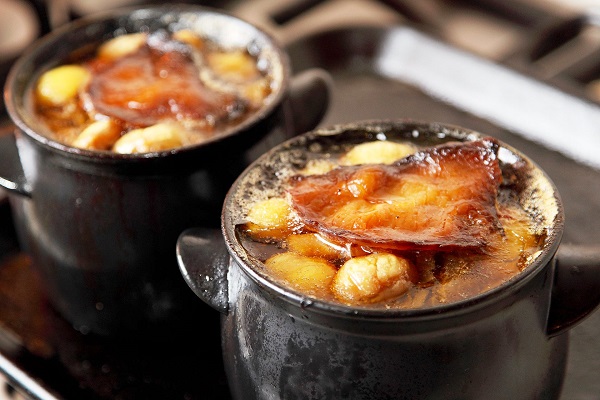 As the king of Sheki cuisine, piti is a thick soup that is not for the rushed and hurried.

If you are going to satisfy your sweet tooth, try Sheki halva, a luscious dessert that will leave a lasting taste in your mouth and a lasting impression. Although halva can be found in the other cities of Azerbaijan, the real Sheki halva can be tried only in the northwest of the country, in Sheki. The recipe remains a secret – only those who own family business called halvachi know how to prepare it. 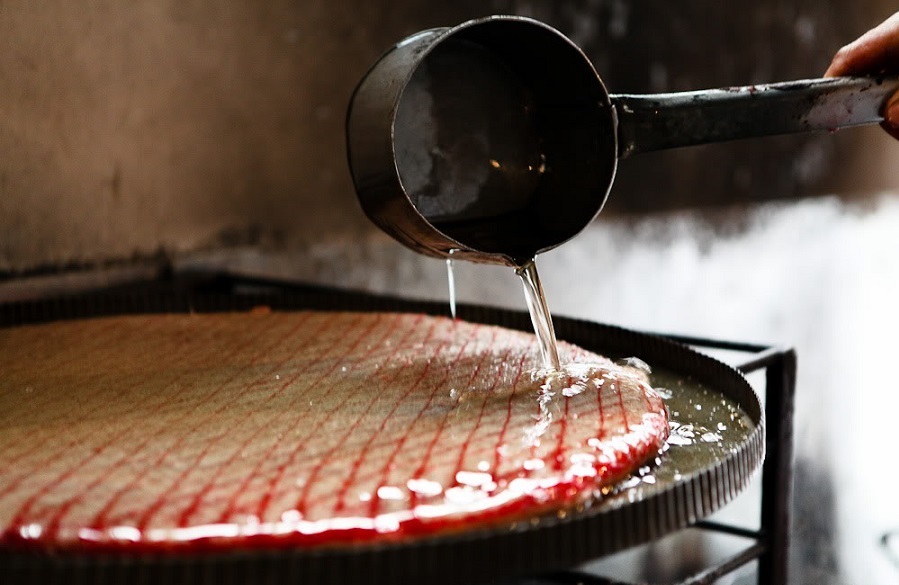 If you are going to satisfy your sweet tooth, try Sheki halva, a luscious dessert that will leave a lasting taste in your mouth and a lasting impression.

Aliahmad is considered the most mouthwatering sweet shop in Sheki. It was founded nearly 100 years ago by Aliahmad Gaffarov, whose store now offers other treats, like Baku pakhlava, ballybady (also known as bamieh), ovma cake and many others.

Since ancient times, Sheki has been known as a city of craftsmen and jewelers, while silk produced in this northwestern region is still used for sewing kelagayi, a four-cornered headscarf for women. In accordance with a 2,000 year-old tradition, the ornament on the scarf is applied using natural dyes and special forms of wood. This is why these scarves do not fade, even after many years of use. Previously only men were allowed to manufacture kelagayi, but today women are also involved in the process.

Some believe that kelagayi’s color, ornamentation and the manner in which one wears it signifies when a person wants to declare love, ask for forgiveness, reconcile or project a person’s social status. Combining several patterns, some say, is a way to signal and transmit secret messages! The production and wearing of kelagayi were included in a list of intangible cultural heritage by UNESCO in 2014.

The production and wearing of kelagayi were included in a list of intangible cultural heritage by UNESCO in 2014.