What To See, Eat And Drink in Azerbaijan's Tovuz Region 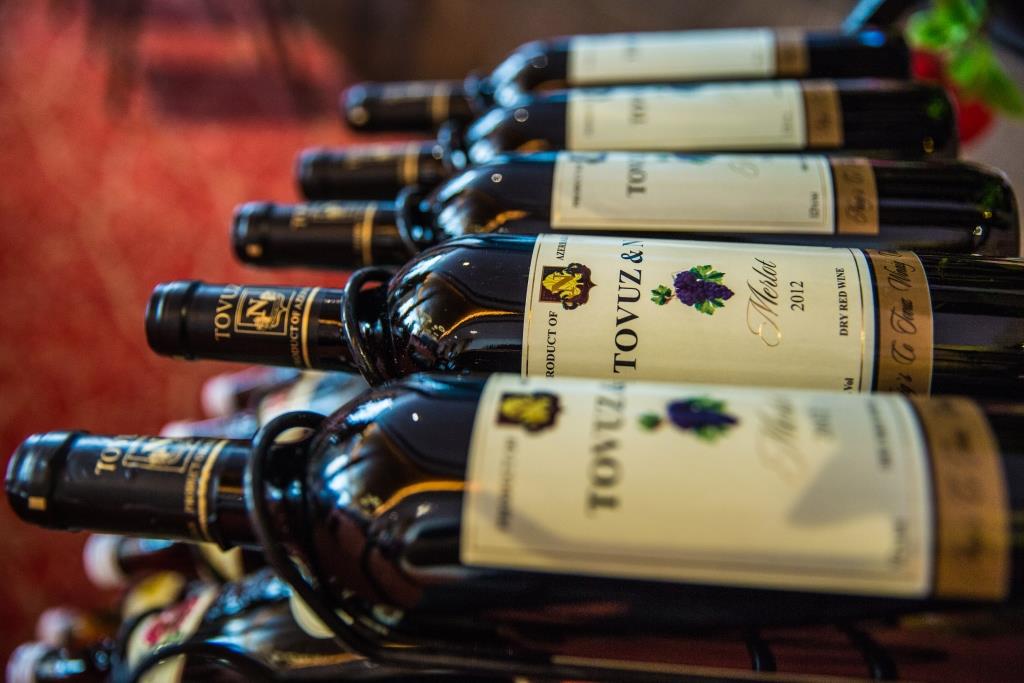 Tovuz is considered the cradle of winemaking in Azerbaijan, since this area has all the favorable conditions for growing grapes.

Azerbaijan’s Tovuz region, situated on the slopes of the Great Caucasus mountain range, is like stepping into a time machine and going back 1,000 years ago – but with better food and much tastier wine.

Tovuz is also the name of the region’s capital city and has a long and storied history, dating back 2,600 years. Located roughly 65 km (40 miles) from the country’s border with Georgia and 16 km (10 miles) from the border with Azerbaijan’s western neighbor, Armenia, the city has withstood the test of time.

Founded by Turkic people, ancestors of modern-day Azerbaijanis, Tovuz has survived Arab conquests in the seventh century AD, devastating raids of Mongols between 1231 and 1239, and incorporation by the Safavid Empire, a medieval Azerbaijani state that existed from 1501 to 1722 and included the territories of a dozen modern countries, including Azerbaijan, Iran, and Caspian neighbor Turkmenistan. It experienced Russian rule in more modern times, including by the tsarist autocracy and the Bolshevik revolution in the form of the Soviet Union, both known for Russian policy of territorial expansion.

The very first settlements date back to the Neolithic period, and some of them, including Goytapa from the sixth millennium BC, were discovered during archaeological excavations between 2008 – 2011.

What To See In Tovuz

You’ll find plenty of evidence of Tovuz’s long history at the Goytapa Archaeological Park, where experts from Azerbaijan’s Institute of Archeology and Ethnography and Tokyo University have carried out excavations and studies for nearly a decade. A five-day archaeological tour of Azerbaijan, organized by the Ministry of Culture and Tourism, makes its way through the country’s nine regions and ends in Tovuz with a stop at Goytapa. 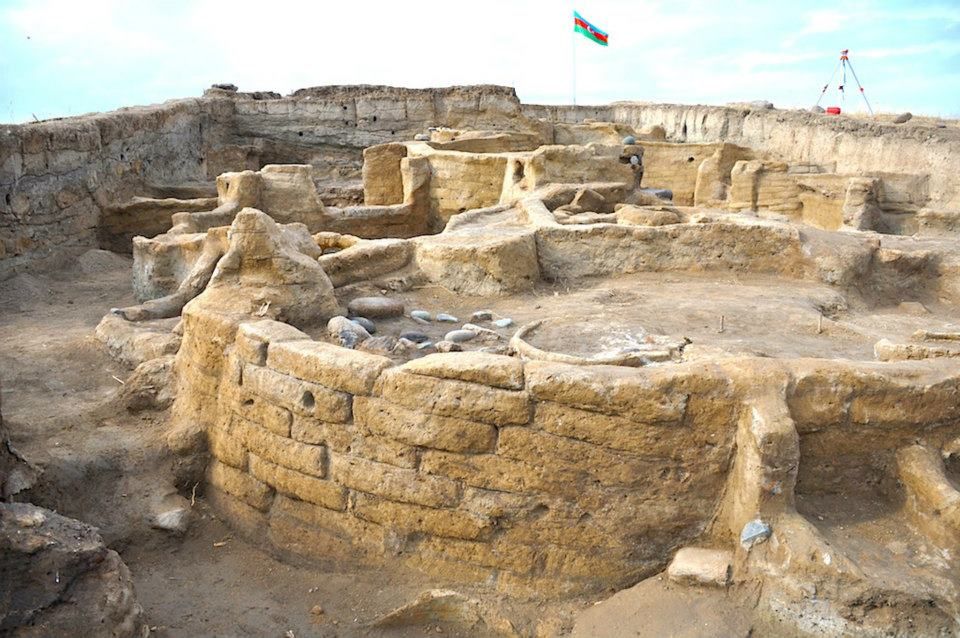 The very first settlements on the territory of Tovuz date back to the Neolithic period, and some of them, including Goytapa, have survived partially.

While in the area, be sure to stop by a small settlement known as Yanikhli, located about 30 km from Tovuz. There you will find a historic bridge, a small but charming mosque and a mausoleum, all dating to the 12th century. And be sure to not miss the region’s caravanserai, complete with an underground water supply and water tower that was constructed in the 19th century.

The Tovuz region’s picturesque mountains, rivers, and springs will entertain those who are tired of excursions to historical sights. Located 435 kilometers (270 miles) away from the country’s capital city of Baku, this western region is deep in the South Caucasus and known for a diverse climate that varies with the terrain. Mountainous areas are characterized by a harsh weather, while flat lands along the Kura, a river south of the Greater Caucasus Mountains that flows east, is known for mild winters and hot summers.

Hunting and fishing are possible throughout the region for those that obtain a license from the Ministry of Ecology and Natural Resources. Mountain slopes are covered with forests, where you can hunt hares and wildfowl, while the rivers that pass through the region, such as the Kura, Akhynja, Tovuz and Zayam, are teaming with fish.

A trip to Tovuz is not complete if you do not try a bit of everything there is to eat, and your culinary marathon should definitely begin with Tovuz khangal.

A popular dish throughout the country, khangal, in its classical form, is made by rolling and cutting the dough into thin, small squares and boiled in a meat broth, which is served with fried mincemeat. But Tovuz residents do things their own way.

When cooking khangal the dough is thinly rolled and cut into small squares and then boiled in a meat broth.

As the area has long been one of the main sources of potatoes for Azerbaijan, locals cook dozens of dishes using the root vegetable, and Tovuz khangal is no exception. Instead of incorporating meat, the dish is prepared with boiled potatoes that are cut into small circles. Finely chopped fried onions and a yogurt sauce known as qurud give the dish a special appeal, both visually and on the palate. Meat is an optional component, but locals like to add some lamb or beef gravy to add extra flavor.

For those with a sweet tooth, qatlama is a must-try. These small, sweet buns made of puff pastry are served with either granulated or powdered sugar and tend to be a staple at all festivities. 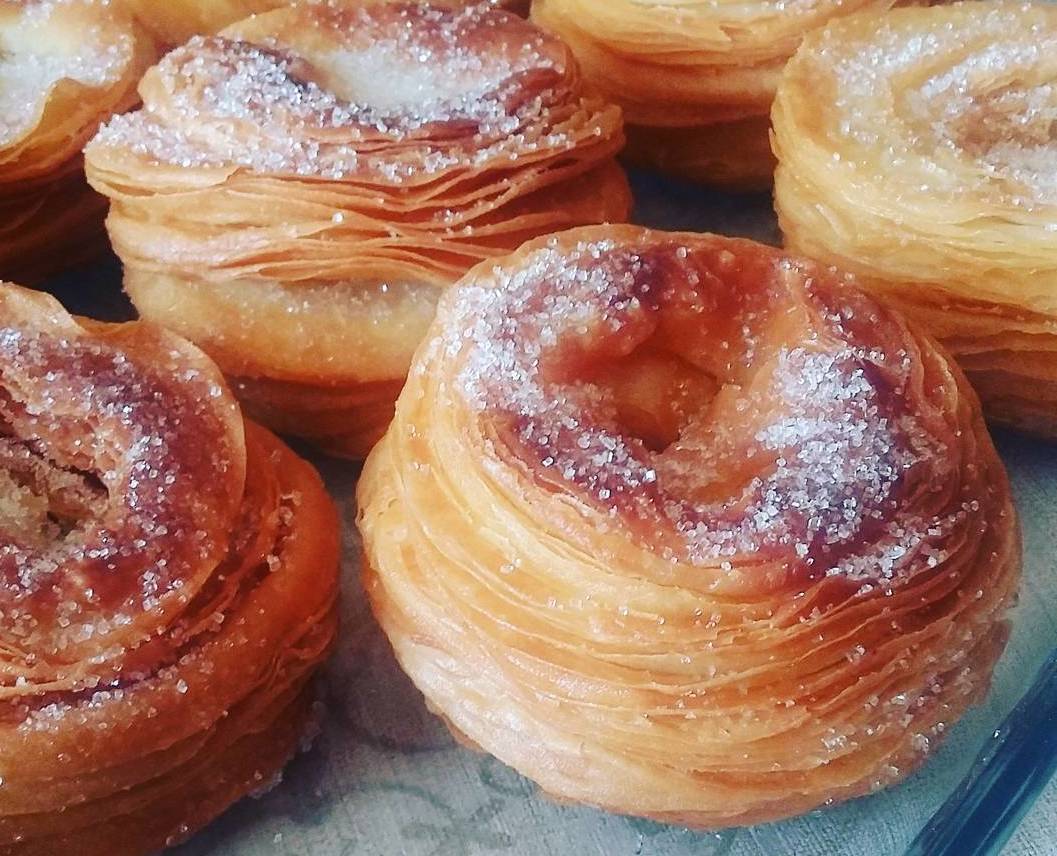 Sweet pastries known as qattama are a favorite dish of both children and their parents.

The local cuisine, rich with vegetables and cereals, is worth trying. If you don’t have a cool Azerbaijani auntie to cook for you, you always have a range of restaurants to visit.

While history and food are reasons enough to visit Tovuz, perhaps the most compelling attribute is its wines and cognac. Together with Azerbaijan’s Ganja and Shamkir regions, Tovuz is considered a cradle of winemaking in Transcaucasia, or the South Caucasus.

Having all the favorable conditions for growing grapes, about 500 Swedish Germans moved to Azerbaijan in 1818 where they established three settlements – Helenendorf in Ganja, Annenfeld in Shamkir, and Traubenfeld in Tovuz. There they launched a large wine and cognac factory, which once supplied its products to the entire Russian market.

The descendants of the Swedish Germans have long since returned to their homeland, but their legacy lives on. Locals adopted their methods of winemaking, and visitors to the region looking to sample some of the best the world has to offer can still do so. Producers have won numerous international accolades for both wine and cognac, including at competitions held in Moscow and St. Petersburg, Frankfurt, Geneva, and contests hosted in France.

Along with traditional red and white wines made from grapes, be sure to try an original drink made from pomegranates. It has a delicate taste and is said to be indispensable in the treatment of ailments, especially those suffering from gastrointestinal and cardiac illnesses, anemia and diabetes. The Ministry of Culture and Tourism organizes a six-day wine tour that is well worth teaming up with to try local products and taste what the country, and its wine and cognac-making regions, have to offer.