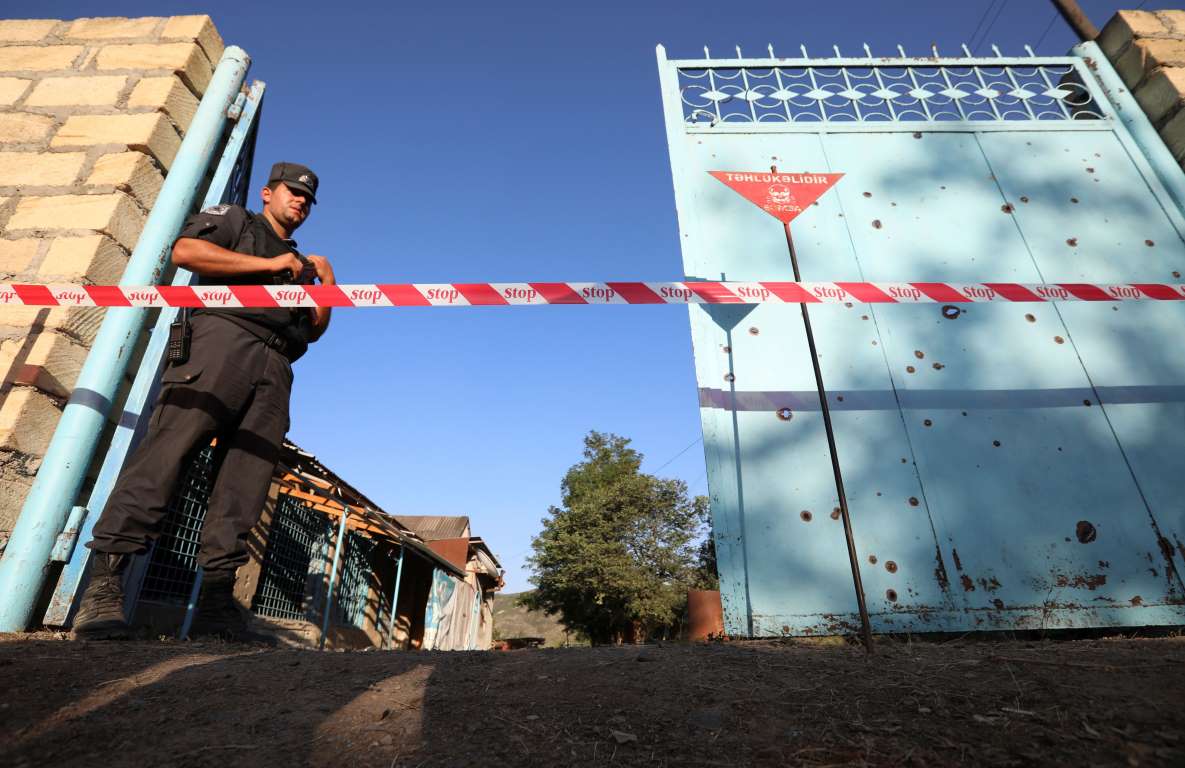 A law enforcement officer guards a yard with an unexploded shell next to a house which was damaged during recent shelling by Armenia's forces, in the village of Agdam, Azerbaijan. / Aziz Karimov / Reuters

The South Caucasus witnessed last week an uptick in bloody border skirmishes between Armenia and Azerbaijan and there is now a growing concern among some experts that Western countries do not understand the ramifications of the region's worst outbreak of hostilities in years.

‘‘Today’s situation shows how dangerous the conflict is and that both sides are prepared to go far,’’ Meister said in an interview with German public international broadcaster Deutsche Welle on July 15.

‘‘It seems to me that the European Union and the West underestimate [the conflict],’’ he added.

Clashes between Armenian and Azerbaijani troops broke out on July 12 after Armenia opened artillery fire on Azerbaijani positions stationed along the international border between the two South Caucasus nations.

According to Azerbaijan’s defense ministry, 12 Azerbaijani servicemen and a civilian have been killed since July 12. Armenia’s investigative committee said that its four servicemen was killed and 36 injured, but some believe the figures are likely to be much higher. Social media users in the country claimed that the government is deliberately hiding real numbers, which they believe is more than 30, of which seven are said to be officers. 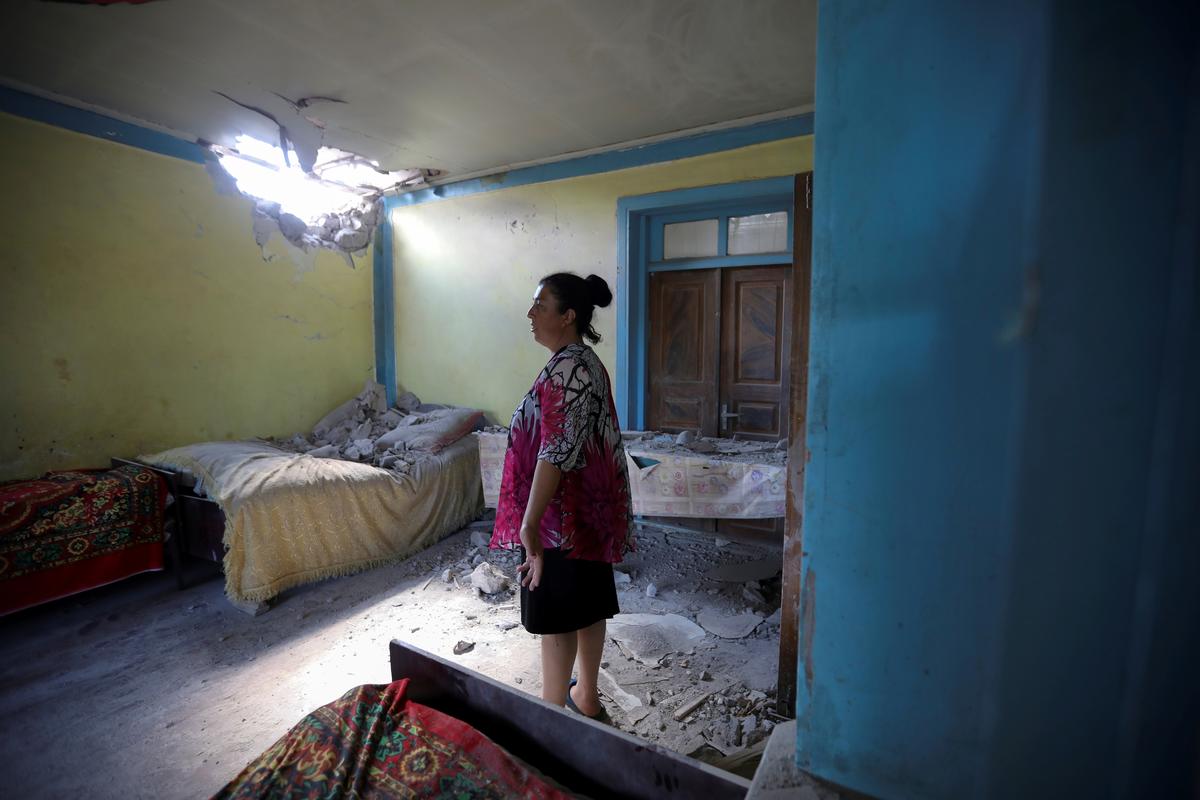 A woman stays in a house, which was damaged during a recent shelling by Armenia's forces, in armed clashes on the border between Armenia and Azerbaijan, in the village of Dondar Quschi, Azerbaijan. / Aziz Karimov / Reuters

Meanwhile, the European Union has already called on Armenia and Azerbaijan to immediately de-escalate the cross-border tensions.

‘‘The EU urges both sides to stop the armed confrontation, refrain from action and rhetoric that provoke tension, and undertake immediate measures to prevent further escalation,’’ Peter Stano, Lead Spokesperson for Foreign Affairs and Security Policy at the EU External Action said in a statement issued on July 13.

Recent clashes in the South Caucasus region have also prompted reaction in Washington. On Wednesday’s press briefing State Secretary Mike Pompeo said the United States was deeply concerned about the recent deadly violence along the Armenia-Azerbaijan international border and urged the sides to ‘‘re-establish a meaningful dialogue and a ceasefire to resume substantive negotiations with the Minsk Group as co-chairs.’’

Some believe that Armenia attacked Azerbaijan's Tovuz district, located nearly 200 kilometers north of Nagorno-Karabakh — the Azerbaijani region occupied by Armenia in the early 1990s, to put under threat major energy corridors for pipelines taking oil and gas from the Caspian Sea to global markets, including Baku-Tbilisi-Ceyhan (BTC) pipeline and the Southern Gas Corridor (SGC) mega-gas pipeline.

BTC pipeline carries oil from the Azeri-Chirag-Deepwater Gunashli (ACG) field and condensate from Shah Deniz deposit across Azerbaijan, Georgia and Turkey. SGC is expected to pump annually 10 billion cubic meters (bcm) of gas from Shah Deniz to Europe, starting sometime in 2020 after the route’s final segment kicks into high gear. In addition, SGC has already started delivering another 6 bcm per year to Turkey.

In 1991-1994, Armenia and Azerbaijan fought a full-scale war that resulted in Armenia occupying 20 percent of Azerbaijan’s sovereign territory, including the entire Nagorno-Karabakh region, where partial ethnic Armenian population lived side by side indigenous Azerbaijanis, and seven surrounding districts, which had been populated exclusively by Azerbaijanis. The war claimed the lives of 30,000 ethnic Azerbaijanis and displaced one million others from their homeland.

Since the early 1990s, the Minsk Group of the Organization for Security and Cooperation in Europe (OSCE) co-chaired by the United States, Russia, and France spearheads international efforts for finding a durable solution to the conflict.

Armenia’s Prime Minister Nikol Pashinyan, who came to power in the wake of the so-called Velvet Revolution in 2018, called for a change in the format of talks so that the self-proclaimed illegal separatist regime in the occupied Nagorno-Karabakh region could be party to the negotiations. In addition, during his visit to the occupied Nagorno-Karabakh region last year, Pashinyan said that Karabakh is part of Armenia, as well as called for the reunification of the occupied Azerbaijani lands with Armenia.

Amidst recent border clashes, officials in Baku have already accused Pashinyan of undermining long-standing peace talks chaired by the Minsk Group. An aide to the president of Azerbaijan, Hikmet Hajiyev told Wednesday a Qatari state-owned broadcaster Al Jazeera that Armenia’s government has once again reaffirmed its policy of annexation of the sovereign territories of Azerbaijan.

Some experts believe the recent outbreak of violence between Armenia and Azerbaijan comes amidst deep dissatisfaction in Baku with the Armenian government and its policy.

‘‘What I see is a deep disappointment in Baku: after the Velvet Revolution in Armenia when the new leadership came to power along with Nikol Pashinyan, there were hopes that changes would come and there would be some progress. These hopes have come to an end,’’ said Meister.