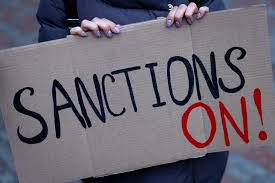 Western countries hit Moscow with wide-ranging sanctions over Russia’s recognition of the two separatist regions of Ukraine and invasion of the country.

On Tuesday, US President Joe Biden announced the first wave of sanctions against Russia for what he called “the beginning of a Russian invasion of Ukraine.”

The “first tranche” of US sanctions against Russia targeted two large financial institutions, Russian sovereign debt, as well as wealthy individuals from Russia. Sanctions on Russia’s foreign debt envisage that the country can no longer raise money for its state financing from Western financial institutions.

The UK and European Union also slapped a series of sanctions against Russia targeting Russian banks and wealthy individuals on the same day.

“Any assets they hold in the UK will be frozen, the individuals concerned will be banned from travelling here, and we will prohibit all UK individuals and entities from having any dealings with them,” Johnson said, according to a statement published on the UK government’s website.

While none of the sanctions went as far as they threatened, the UK prime minister said London was ready to escalate sanctions against Russia in the event of a full invasion of Ukraine.

“This is the first tranche, the first barrage, of what we are prepared to do: we will hold further sanctions at readiness, to be deployed alongside the United States and the European Union if the situation escalates still further,” he added.

UK’s move is part of coordinated sanctions with all 27 European Union member states, which unanimously agreed to take similar steps later in the day. Among the package of anti-Russian measures, the EU member nations also targeted all 351 members of the Russian State Duma who backed the recognition of the two breakaway regions of Ukraine as independent entities.

In the meantime, Germany halted certification of the Nord Stream 2, a key Russian gas pipeline designed to annually deliver additional 55 million cubic meters (bcm) of Russian natural gas to Europe through the Baltic Sea. The $11-billion project has been completed but could not start operations until Germany’s energy regulator gives the go-ahead.

Separatist forces in the Donetsk and Lugansk regions – collectively known as Donbas – broke away from Ukrainian government control in 2014 and proclaimed themselves independent “people’s republics.” Since then, the Kremlin has been accused of exerting control over both regions, with some suggesting Moscow eventually wants to claim the region as Russian territory.